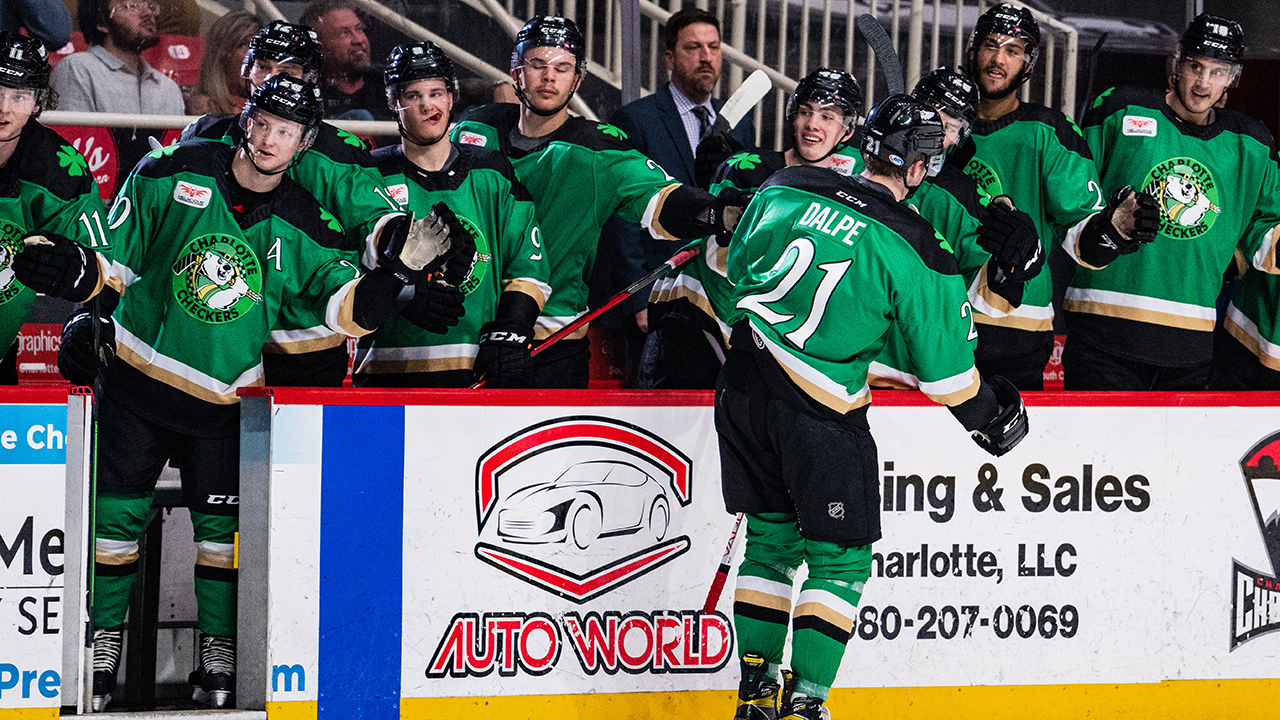 It took a while, but the Checkers kept their hot streak on home ice rolling by besting the Bruins in the shootout 2-1.

The division rivals remained engaged in a deadlock after 60 minutes of play, and when a conservative overtime period couldn’t break the tie, things moved on to a shootout.

Joey Daccord was a rock in net for Charlotte, posting 38 saves across 65 minutes of play, and he kept that momentum going into the shootout. The netminder denied each of Providence’s first two shooters, setting the stage for Cole Schwindt to swoop in and light the lamp on Charlotte’s second attempt. With the game on the line, Daccord stepped up and shut down Providence’s final attempt to clinch a clutch two points for the home squad.

Nearly all of regulation was a defensive battle between the two sides. After a penalty-slogged first period in which the teams combined for a total of seven unsuccessful power plays, the Bruins broke the ice early on in the middle frame to take the lead.

That advantage didn’t last long, however, as Zac Dalpe pitched a quick wrister into the corner just 69 seconds later to draw things back into a tie and put the game on the track for overtime.

And you just knew @JDac35 was gonna bring that celly pic.twitter.com/sLAEkAO54T

SCORE SHEET PHOTO GALLERY
Coach Geordie Kinnear
I thought they were the better team in the first half, but after Dalps scored we started to find our identity and started playing our game. They’re a really good hockey team, it was tight checking, and as I said in the second half I thought we started to get going a little bit. In the first half we weren’t real sharp. Too many penalties.

Kinnear on the penalties
Some guys can’t take sticking penalties. We take way too many. We talk about it and that’s an area we can get better at. When you’re not skating and you’re stick checking, bad things happen. Way too many kills.

Kinnear on carrying the momentum to two more games against Providence this weekend
Be more hungry, win more puck battles and win more one-on-one battles. You can draw up all the Xs and Os you want, but if you don’t do those things you’re not going to win.

Cole Schwindt on his shootout goal
Just wanted to get a shot off and get it off quick. I tried to keep it simple, and luckily it went in there.

Schwindt on having Daccord in goal tonight
It’s awesome. We have full trust in him. He’s an unbelievable goaltender. It’s nice seeing those guys come down in the shootout and knowing that he was going to save that for sure.

The Checkers’ postgame auction of the Helacious St. Patrick’s Day jerseys raised $46,355, shattering the team record for a speciality jersey auction … The Checkers improved to 6-1-1 in their last eight games. They are third in the Atlantic Division, their highest standing since Nov. 17 … Charlotte has won both of its shootouts this season, both with Daccord in net … Daccord is 4-0-0 with a 1.23 goals-against average and .966 save percentage in March … Dalpe’s 23 goals are at least four more than any other Checkers player … Aleksi Heponiemi (1g, 4a) and Dennis Cholowski (0g, 4a) each extended their point streaks to three games … Charlotte is 1-2-0 against Providence this season … Grigori Denisenko, Gustav Olofsson, Max Gildon, Connor Carrick, Christopher Gibson and John Ludvig missed the game due to injury … Owen Tippett, Jacob Friend and Carter Robertson were healthy extras.