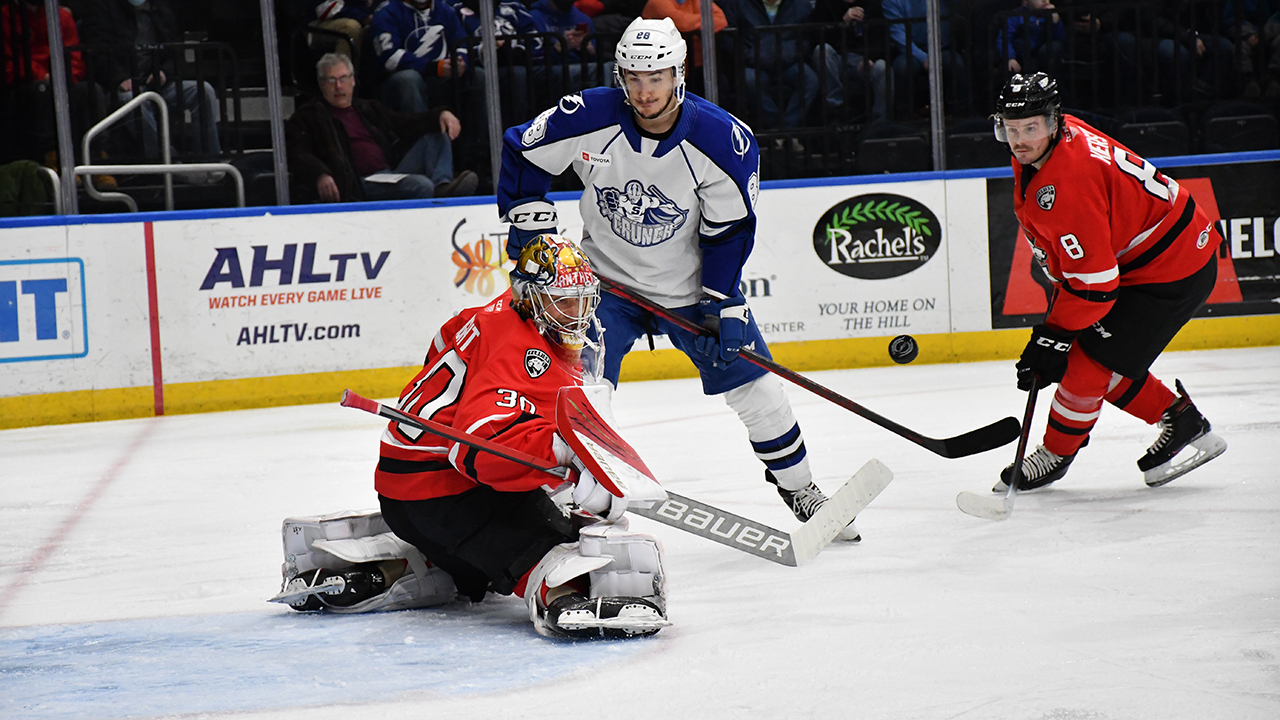 The Checkers kept their foot on the gas in their second contest of the weekend, throttling the Syracuse Crunch 6-1 behind a hat trick from Scott Wilson and a stellar outing from Spencer Knight.

Wilson kicked things off in the first by wiring a quick wrister from the slot into the back of the net, then doubled the visitors’ lead by turning a smooth defensive takeaway into another tally midway through the second. The veteran forward capped off his hat trick in the third period, hammering home a slick passing play to tack one more goal onto the lopsided scoreboard.

What a way to cap off the hat trick! pic.twitter.com/uJ4llNgGzA

Wilson’s second-period strike was a shot in the arm for the Charlotte offense, as Henry Bowlby quickly added another goal with a redirect from out front and Aleksi Heponiemi broke through on a power-play breakaway to further extend the visitors’ lead minutes later. The Crunch would eventually find the back of the net late in the middle frame, but a Max McCormick tally in the early stages of the third shut down any sort of rally attempt by the Crunch.

SCORE SHEET PHOTO GALLERY
In his second game with Charlotte, Knight turned in a gem between the pipes. The 20-year-old netminder stopped 37 of the 38 shots he faced - including 15 in the first period alone - and backstopped the Checkers to a victory, his first in the AHL.

The Checkers have won four straight road games, their longest such streak of the season … Scott Wilson is the third Charlotte skater to record a hat trick this season, tied for the most in a single season in franchise history … It is Wilson’s first career AHL hat trick … Aleksi Heponiemi recorded his third consecutive multi-point game … Spencer Knight earned his first career AHL win and also picked up his first pro point with an assist … Brandon Fortunato notched his first AHL point with an assist … The Checkers have won two straight games against the Crunch and are 2-1-0-0 in the season series … Jacob Friend dropped the gloves for his first AHL fight … Tonight was the fourth time this season the Checkers have scored at least six goals in a game … The Checkers have scored at least four goals in four of their last five games … The Checkers registered a power-play goal and went perfect on the penalty kill for the second straight game … Heponiemi extended his assist streak to four games, tying for the longest such streak by a Checker this season … Kole Lind extended his point streak to four games and Cole Schwindt extended his to three games … Grigori Denisenko, Ryan Lohin, Max Gildon, John Ludvig, Gustav Olofsson and Christopher Gibson all missed the game due to injury … Max Zimmer, Jordan Sambrook, Bobby Russell and Billy Christopoulos were healthy extras

The Checkers will get a few days to regroup before continuing their New York road trip with a visit to Rochester on Wednesday.