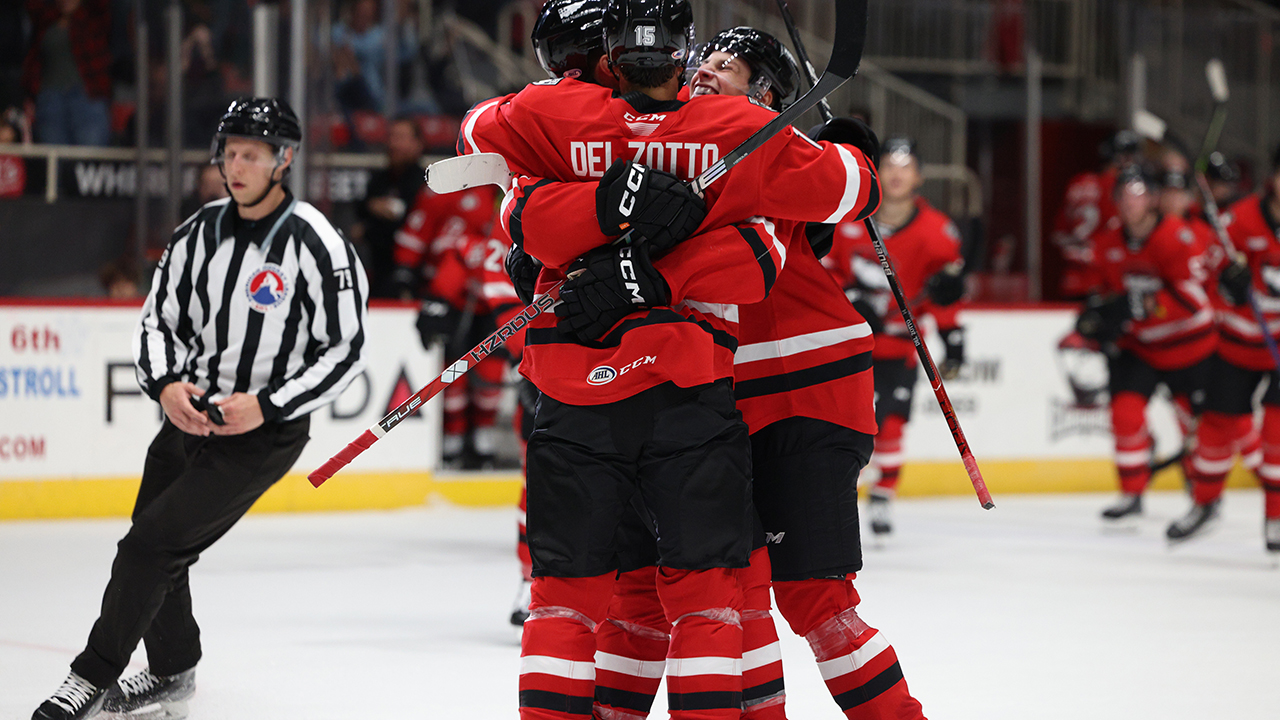 The Checkers continued their red-hot start to the season on Saturday, beating the Bears 3-2 in overtime to move to 4-0-0.

Deadlocked at two after 60 minutes of play, the Checkers fended off some solid chances early on in overtime from Hershey before Logan Hutsko and Chris Tierney turned the puck up the ice for an opportunity of their own. Hutsko fired a shot off the odd-man rush that squeaked behind the Bears netminder and Tierney was there to tap it across the line, keeping Charlotte’s undefeated streak alive.

Hutsko drove the Charlotte offense throughout regulation, lighting the lamp twice while erasing a Hershey advantage each time. The sophomore forward’s tally midway through the second period proved to be the last of regulation, putting the contest on course for overtime.

In his second pro start Mack Guzda turned in an electric performance between the pipes, pulling off a string of acrobatic denials and finishing the night with 27 saves in his winning effort.

SCORE SHEET PHOTO GALLERY
Coach Geordie Kinnear on the game
I felt probably, if you asked both coaches, it was a better hockey game by both groups. Each team had their moments. We have to stay out of the box obviously, we took too many penalties, but it’s a process and we’ve got to correct that part of it. I thought overall it was a good hockey game and it did the game justice by going to overtime.

Kinnear on Logan Hutsko
Just great jump. He has a different mindset this year and he’s come ready to work every single day. Sometimes that’s just getting your first year under your belt and knowing how hard this league is. He’s come prepared and ready to work and he was rewarded for his work.

Kinnear on Mack Guzda
A good hockey game has good goaltending, and I thought both goalies made some Grade A saves when both teams needed it. I’m proud of him. He’s honestly the hardest working guy every day in practice and he had a good game for us.

Kinnear on winning different types of games
We bent a little bit but we didn’t break, and that’s going to happen in games throughout the year. I’m proud of the guys for not breaking. We definitely bent, but that’s just the nature of the game. Momentum swings and you’ve got to be able to sustain it. When you have a play on your stick to make, make it.

Logan Hutsko on combining with Chris Tierney for the overtime goal
He’s a great player and a really good passer, so I kind of figured it was going to come over to me. It started to open up a bit, so I got it on my backhand and just tried to get it off as quick as I could.

Hutsko on winning a close game
I think we just have a lot of confidence in the group. That’s just the biggest thing – we never feel like we’re out of it.

Hutsko on Guzda
He’s been awesome. I’ve never seen a guy compete as hard as he does. Even in the shootout at the end of practice, he’s 115 percent every time. It’s no shock to see him have success. He works his back off.

This matches the Checkers’ best-ever start to the season, a 4-0-0 run in the 2018-19 championship season. That team lost its fifth game in overtime … The Checkers are one of only two AHL teams with perfect records thus far. The other, San Jose (2-0-0), plays later tonight … Hutsko’s goals were his first since March 2, ending a 27-game drought (including playoffs). His last goal was also against Hershey. This was his second career two-goal game … Guzda, the only goaltender to play multiple games for the Checkers this season, has a 1.48-goals against average and .950 save percentage to start his pro career … Dating back to last season, the Checkers have not lost a home game in regulation since Feb. 11 (19 games) … The Checkers are the only AHL team with multiple overtime victories (two) … Tierney (2g, 2a) and Santtu Kinnunen (1g, 3a) are the only Checkers with at least one point in all four games this season … Zac Dalpe, who missed the first two games due to injury, has four points (2g, 2a) in his two contests … Calle Sjalin recorded his first career AHL point with an assist on Hutsko’s second … Max Gildon and Ethan Keppen made their season debuts. It was also Keppen’s Checkers debut … Forwards Riley Bezeau, Serron Noel and Justin Sourdif, defensemen Dennis Cesana and Zach Uens, and goaltender J-F Berube were healthy extras.