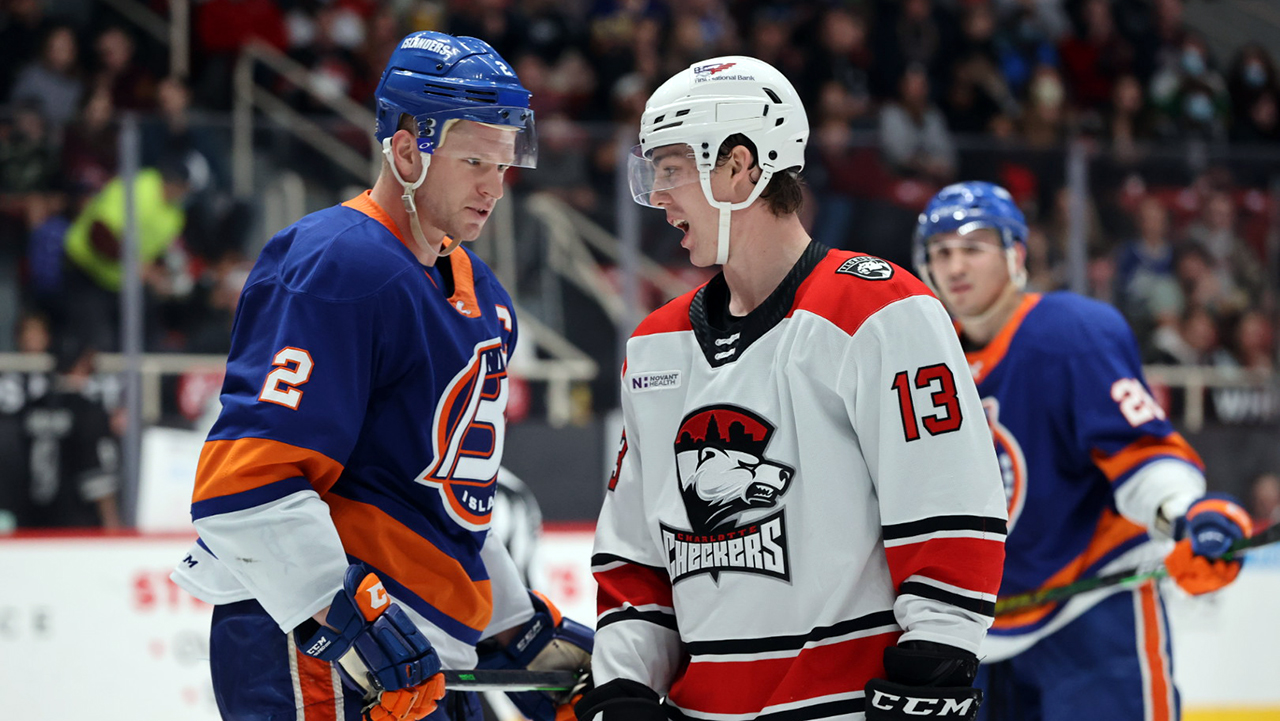 The Checkers saw their win streak come to a halt Saturday night, as the Bridgeport Islanders handed Charlotte a 5-1 defeat.

The Islanders owned the opening frame, breaking the ice early and tacking on another pair to extend their lead before the first buzzer. The Checkers punched back in the middle frame, however, as Carsen Twarynski narrowed the gap for the home team with a tally, but that would be all the offense Charlotte could muster.

Despite a push from the Checkers in the third, it was the Islanders who found the back of the net twice in the first half of the frame to seal things up and put an end to Charlotte’s comeback hopes.

The home side pumped 29 shots on net throughout the night - plus a few off the iron - but Jakub Skarek was up to the task for Bridgeport. On the other side of the ice, Spencer Knight made his Charlotte debut and saw plenty of action - collecting 27 saves on the night.

SCORE SHEET PHOTO GALLERY
Coach Geordie Kinnear on the game
Not a great start. This was the first time probably as a head coach that I was disappointed with the start. I didn’t think everyone was ready to go the right way. That’s on me and that’s on the group. There were a lot of distractions the last couple of days, and being a young group we have to remain focused. We have a job to do and we didn’t get it done tonight.

Kinnear on trying to get back in the game
It was a good second period, but we’re down in the game 3-0. You’re chasing the game and guys play a little more free, but at least in the period we started to skate, work and play to our identity. Then at the start of the third there was a quick goal and we lost all energy.

Kinnear on getting more shots on net
Just a little more composure with the puck. I thought we had a lot of chances too and missed the net. We were a little nervous with the puck at times. That’s not our identity. We can play a lot better than we did today.

Kinnear on if fatigue is becoming a factor
I think it’s more the distractions. I think if you really have laser focus and go a shift at a time, you can dig in. We play a great game that we’re all grateful to be able to play with all the other stuff going on. Show up and win one shift at a time and have that focus. Eliminate the distractions. That’s on me as a coach, too. We have to be focused and ready to go.

Kinnear on Spencer Knight’s debut
When we lose, we lose as a group and everyone needs to be better.

The Checkers missed an opportunity to win four straight for the first time this season. They are still 5-2-0 in December … This was Charlotte’s first loss of four or more goals this season … The Checkers have now used six different goaltenders this season, tying Toronto for most in the league … The Checkers are 1-1-0 against Bridgeport this season … Bridgeport (and former Checker) defenseman Mike Cornell dressed as an emergency backup for the Islanders … Defenseman John Ludvig and goaltender Chris Gibson missed the game due to injury … Goaltender Devan Dubnyk was a healthy extra.