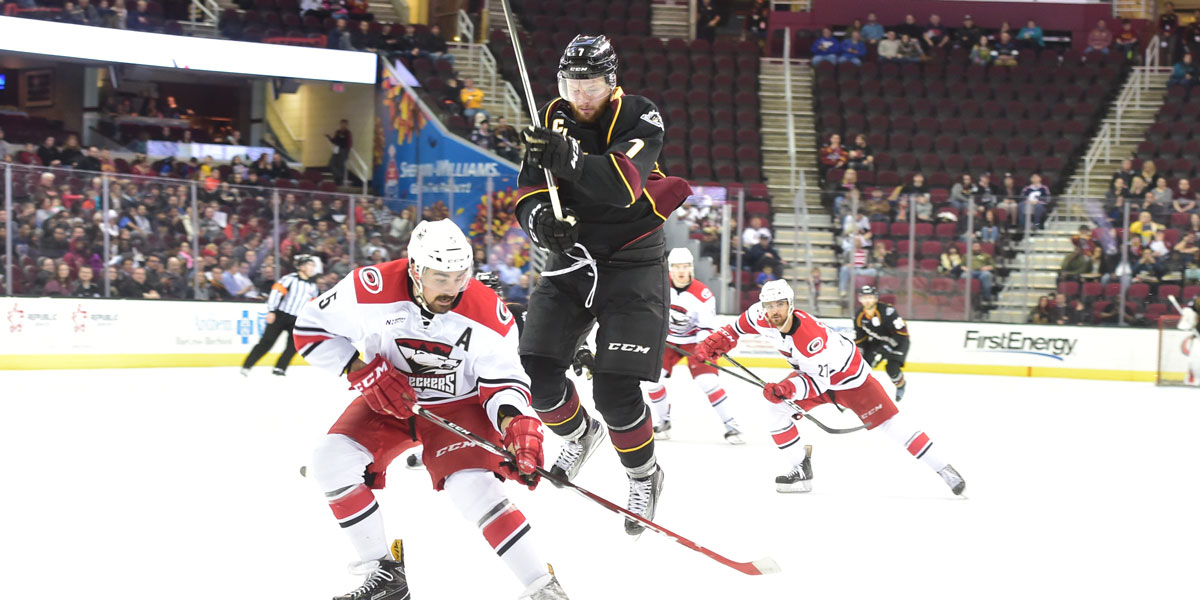 Former Checker Zac Dalpe came back to haunt his old club with an overtime goal that gave his Cleveland Monsters a 3-2 win and a narrow lead in the Central Division playoff race.

Dalpe, who played for the Checkers from 2010-13 and still ranks fifth on the club’s all-time scoring list, recorded the Monsters’ third power-play goal of the game in the extra session to move his team up to fourth in the Central, knocking the Checkers out of playoff position with 10 games to play. The teams meet again Thursday, when Charlotte will have an opportunity to reclaim that spot.


Score SheetPhoto Gallery
Aleksi Saarela, a Carolina Hurricanes prospect making his North American debut, and Patrick Dwyer, who added a shorthanded tally, scored for Charlotte, which is now winless in its last two outings (0-1-1) following a seven-game win streak. Tom McCollum made 16 saves in a tightly-played contest that saw the Checkers emerge with a 23-19 shots advantage.

Prior to tonight, the Checkers had not allowed multiple power-play goals in the same game since Feb. 28. They had allowed three, their season high, on two previous occasions … Cleveland extended its win streak to six games, all of which have come at home … Charlotte is now 4-2-1 in the season series with Cleveland, with the home team winning each game … The Checkers now have eight shorthanded goals this season, including two by Dwyer … Charlotte extended its season-long point streak on the road to five games (3-0-2). This was its first road game since March 10 … Charlotte fell to 6-5 in games decided during the 3-on-3 overtime period this season … Forwards Kyle Hagel and Erik Karlsson and goaltender Michael Leighton missed the game due to injury … Forwards Bryan Bickell, Hudson Elynuik, Levko Koper and Sergey Tolchinsky and defenseman Tyler Ganly were healthy extras.

The Checkers conclude their season series with Cleveland on Thursday at 7 p.m. before continuing their four-game road trip with games in Grand Rapids (Friday) and Chicago (Sunday).