Looking to bounce back to their winning ways, the Checkers couldn’t quite muster up enough to put the Milwaukee Admirals away, falling 3-2 in overtime.

The Checkers’ newly assembled top line of Andrew Poturalski, Phil Di Giuseppe and Valentin Zykov were a strong offensive force throughout the night, accounting for both of the team’s goals. Poturalski opened the scoring by picking up a loose puck out front midway through the first period, then Zykov doubled the advantage with a short-side snipe late in the middle frame to put the visitors on top 2-0. But in the final minute of the second period, the Admirals were finally able to solve Michael Leighton, beating the Checkers netminder to cut the lead back to one with two periods in the books. 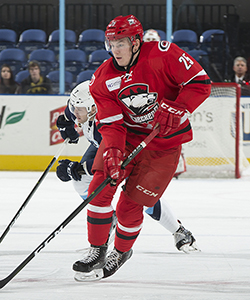 Things locked up in the third, with the teams combining for just 10 shots on goal, but the Admirals found a way to tie things up quickly, with Frederick Gaudreau squeaking in a low-angle shot 90 seconds in. That would stand as the only offense of the frame, and the game moved on to overtime.

The Checkers came out firing in the extra frame, creating several chances, the best of which came from Di Giuseppe when he cut toward the net with speed and flipped a quick shot to the far side of the goal, missing by mere inches. The Admirals would push back, however, and after a questionable tripping call went uncalled, it was Trevor Smith who ended up with the puck all alone in front and slid the game winner in five hole.

The 22 shots fired on net for Charlotte stands as the team’s lowest output this season, as do the three taken in the third period. Similarly, they weren’t able to convert on any of the three man advantages they had on the night, while their penalty kill surrendered a goal for the third consecutive game, the longest such streak they’ve encountered this season.

Leighton, making his third straight start, was solid for the majority of the contest, including making multiple saves on scrambles in front of his crease, but came away with his second consecutive loss.

The Checkers’ road trip keeps rolling on after tonight, as the team heads to San Antonio for a pair of weekend matchups with the Rampage.