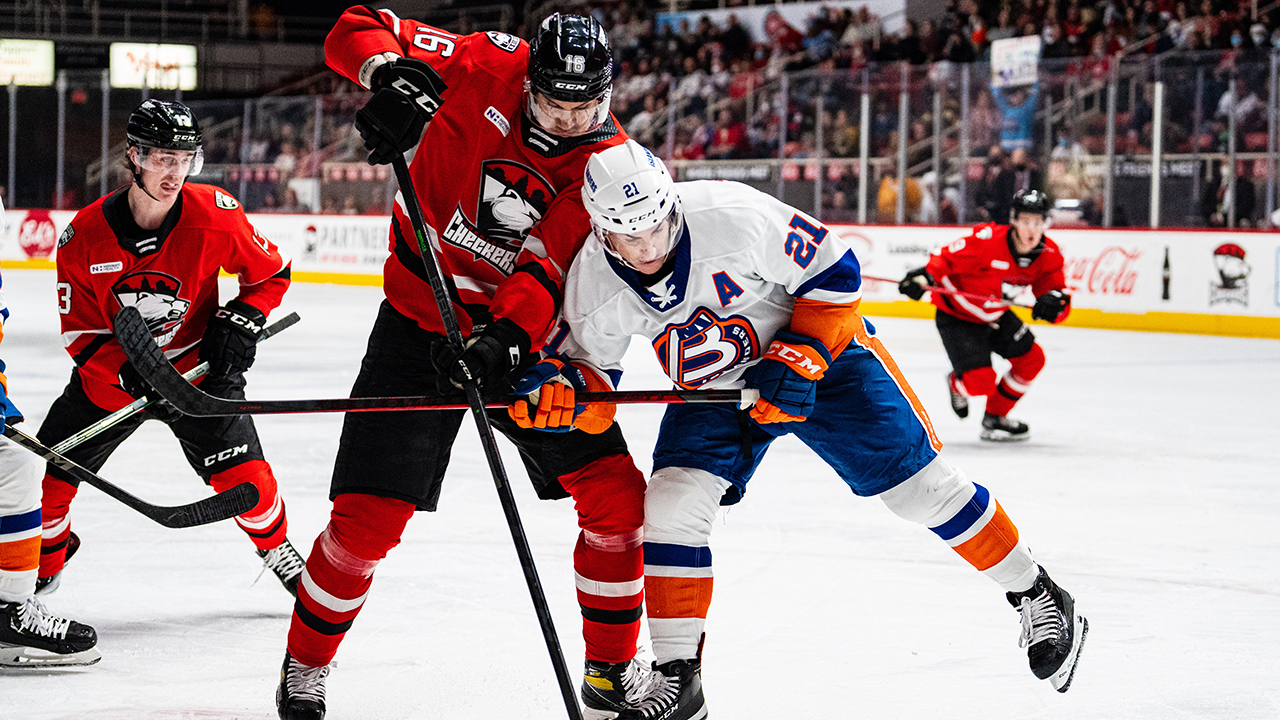 The Checkers and Islanders went toe-to-toe in a physical bout Friday night, but it was the visitors who squeaked out a narrow 4-3 win over Charlotte.

The newest Checker, Dennis Cholowski, opened the scoring early on in the first period to give the home side a lead before things slogged down through the middle of regulation.

Tempers flared in the second period, which featured 46 total penalty minutes between the two sides. There wasn’t much by way of five-on-five hockey in the middle frame, but the Islanders pounced late to knot the score heading into the intermission.

The offense finally broke through in the third period, as the two sides traded goals to extend the deadlock into the back half of the frame. The Islanders took advantage of their seventh power play of the night, however, grabbing the lead back before notching another goal just 10 seconds later.

The Checkers would swing the momentum back to their side in the waning minutes. Connor Carrick netted his second tally of the night to pull Charlotte back within a goal with 90 seconds to play, but time would run out on the rally attempt and the home side dropped the contest 4-3.

Kinnear on wanting to be physical yet staying disciplined
Discipline is a big part of it. We want to be physical but we want to be smart too. It was kind of a weird hockey game with how it was called, but it is what it is. We came up on the short end of the stick and we’ve got to be better tomorrow.

Kinnear on close games against Bridgeport this season
I thought they raised their level of physicality in the second period. They got more engaged than we did and we kind of sat back. That’s why they won the hockey game.

Kinnear on the Checkers pressing to tie the game
It's a great group and they never go away. It’s not a hope, there’s an expectation in the locker room with the leadership group. I don’t really like giving up a goal, losing focus and giving up another one right back. You look at the scoreboard, that’s the difference in the hockey game. We have to stay focused the whole game, not just in pockets of it.

Connor Carrick on special teams
You can’t put them on the power play, but at the same time on special teams we had our opportunity to make our mark on the game. You get emotional and things happen sometimes. Ideally you don’t get to that place. You want your special teams to be able to tilt it for you, but they got a big goal at the end there. Carrick on the flow of the game There just wasn’t a lot of five-on-five time to get jelling. You’ve got some of your power play guys playing heavy minutes and they’re going to be tired on the other side of it. It’s an unspoken part of the game that most players really attribute to is that they want to keep that rhythm, and when you’re trading penalties like that, guys lose it.

This was Carrick’s first multi-goal game since recording a hat trick for Toronto in the 2016 Calder Cup Playoffs … Carrick’s two goals, +3 rating and five shots on goal were all the highest of any skater on either team … Cholowski played his first AHL game of the season … The Checkers went 0-for-6 on the power play, while Bridgeport went 1-for-7 … The Checkers are 3-3-0 against Bridgeport this season … In addition to Cholowski, forward Justin Nachbaur made his Checkers debut … Grigori Denisenko, Aleksi Heponiemi, Max Gildon, John Ludvig, Gustaf Olofsson and Christopher Gibson missed the game due to injury … Ryan Lohin, Brandon Fortunato and Blake Siebenaler were healthy extras.