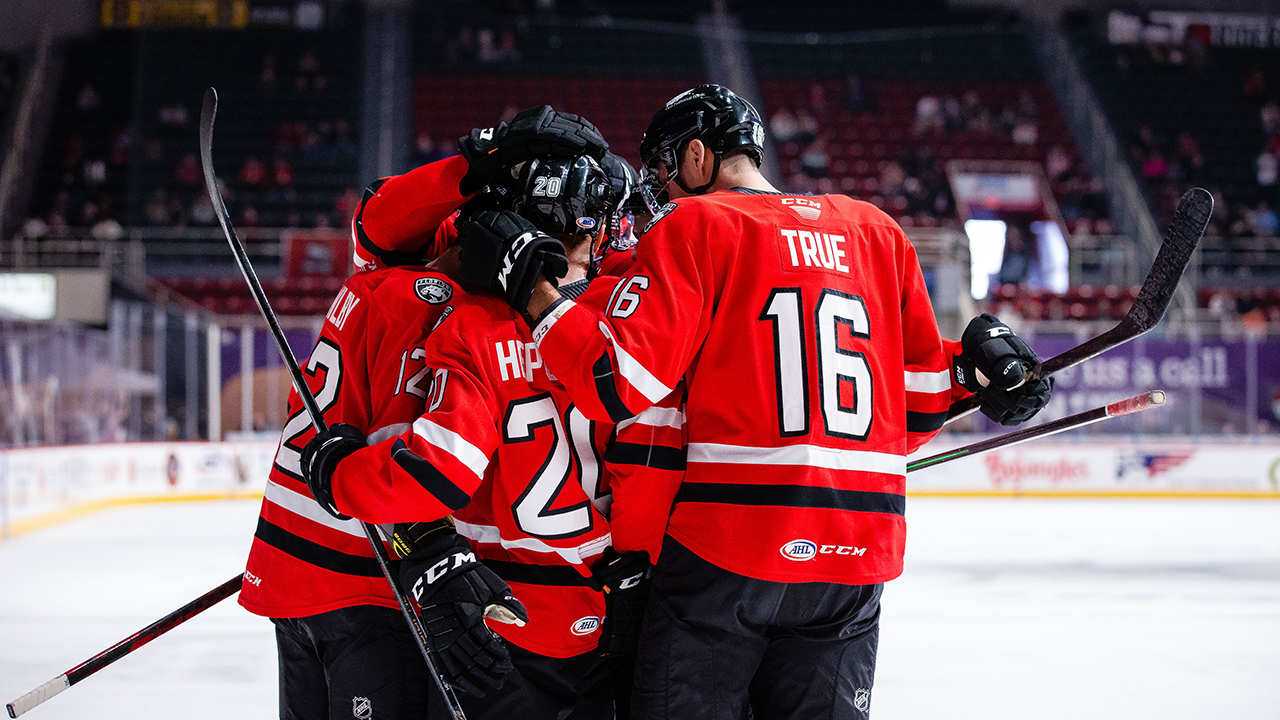 Today’s edition of overtime featured a few more chances than the previous two contests, but neither side converted and the game would be ultimately decided in a shootout once again.

Each side’s first shooter found the back of the net, then Cole Schwindt led off the top of the second round with a slick move that beat Bruins netminder Kyle Keyser. Antoine Bibeau came up with a strong denial on Providence’s chance, and following a stop on Scott Wilson he was faced with a chance to win the game. Bibeau once again rose to the occasion, stonewalling the Bruins’ third attempt and snaring another huge two points for his club.

Bibeau followed Joey Daccord’s stellar outings from the previous two games with a gem of his own, finishing the 65 minutes of play with 36 stops on 37 saves to earn his first win for Charlotte since Jan. 28 - his previous start.

The Bruins opened the scoring with a power-play strike early on in regulation, but the Checkers answered right back as Aleksi Heponiemi cleaned up a rebound out front less than two minutes later to draw things into a deadlock that would last the remainder of regulation.

For real, this is our thing now ⚡️ pic.twitter.com/xTTuQ8BgVP

SCORE SHEET PHOTO GALLERY
Coach Geordie Kinnear on how the teams matched up so closely for three games
I don’t know, to be honest with you. Just two teams that were hungry to get a victory, and it was three good hockey games.

Kinnear on how his team progressed throughout the three-game series
I thought there was fatigue tonight where both teams had to dig in at certain times, but I give both teams a lot of credit. There was some fatigue there with the quick turnaround. Both teams have played a lot of hockey with a lot of travel, so it was a good hockey game. Our goalies stepped up big all weekend and obviously our shooters in the shootout.

Kinnear on Antoine Bibeau’s first AHL start in two months
He's had a couple of tough (situations) because he had to come in for an injury and a couple of other times on the road he came in. He never complains, he comes to work every day, and he’s been a great teammate and a great guy to have in the room. He deserved that victory and I’m glad the guys played hard for him.

Kinnear on if these games help prepare for playoff situations
Absolutely. You look tonight, a lot of blocked shots and guys playing through some injuries. That’s what it’s about. The teams that dig in and stay mentally though throughout it. I thought both teams did and obviously went to a skills competition at the end, but I’m proud of the guys.

Antoine Bibeau on his first AHL start in two months
I felt good. I’ve been working hard in practice and in the meantime I’ve had the chance to go to Allen and play some games. I felt ready and I had the chance to play last week for half a game and then a period before that. We’ve been working hard in practice and making sure I was ready when I had a start.

Bibeau on his approach to this game
It was the third game in four nights, so really it was about keeping it simple and giving the team a chance to win. I knew that if I kept it close we would find a way. This team is so resilient. I think the team played a hell of a game tonight.

Bibeau on playing with less-experienced defensemen in front of him
I think it’s communication mostly. Don’t be scared to talk out there. Sometimes when it’s your first year or your first few games, you’re quiet and you don’t want to talk or you don’t want to say anything. I think it’s the opposite. We want them to talk and we want them to be proactive and not be scared to make mistakes. I think they stepped in and did really well.

The Checkers are 8-1-1 in their last 10 games. Each of their last four games went to overtime, as they lost to Springfield just prior to their three-game shootout sweep of Providence … The teams combined for just seven total goals in the three-game set … The Checkers are 4-0 in shootouts this season. Six different skaters have shootout goals, with Zac Dalpe and Cole Schwindt, both of whom scored tonight, leading the team with two each … Charlotte extended its home point streak to 10 games (8-0-2) … Bibeau’s previous AHL start was Jan. 28. He had four relief appearances in between … Heponiemi has six points (2g, 4a) in his last five games … The Checkers are 3-0-2 against Providence this season … Grigori Denisenko, Max Gildon, Connor Carrick, Christopher Gibson and John Ludvig missed the game due to injury … Jacob Friend, Ryan Lohin, Justin Nachbaur, Gustav Olofsson and Carter Robertson were healthy extras.