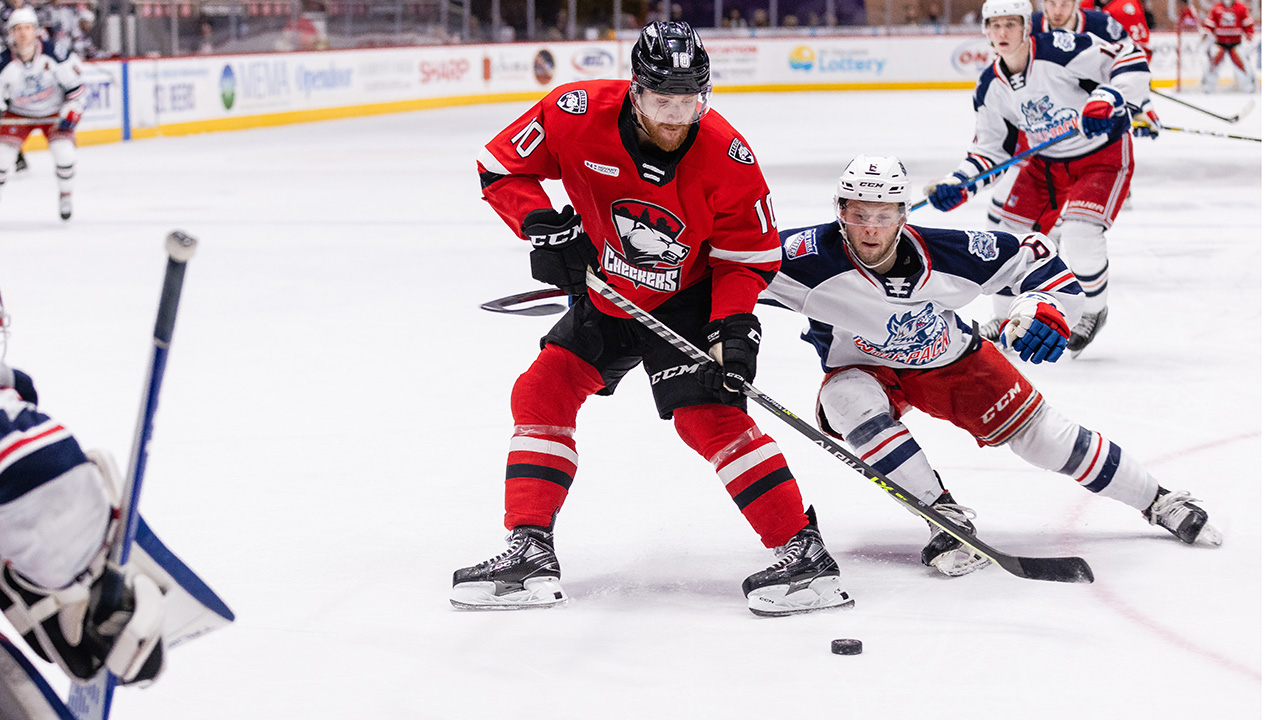 The Checkers extended their run of banking standings points at home, but they couldn’t quite pull off the weekend sweep of Hartford, falling 4-3 in overtime.

Finding themselves trailing by a goal in the third period, Alexander True came through for the Checkers with a quick shot that found the back of the net and forced the contest in overtime.

The extra frame didn’t last long, however, as the Wolf Pack controlled the action and knocked in the game winner 21 seconds in to claim the victory.

The first period saw the majority of the offensive action, as Luke Henman sniped one home just 35 seconds after Hartford opened the scoring to draw the game tied just 2:20 into regulation. Zac Dalpe - skating in his 600th pro game - marked the occasion with a tally of his own on a power play later in the frame, but back-to-back strikes from the Wolf Pack gave the visitors the upper hand until True’s goal in the third.

SCORE SHEET PHOTO GALLERY
Coach Geordie Kinnear on the game
I thought it was a fast game. We knew it was a hungry team across the way and they played hungry. I liked how we were hungry too, I just felt that at times our execution wasn’t where it normally is. They executed on the end on a play.

Kinnear on lineup changes from last game
We had guys step in today that hadn’t played for a bit, so it was an opportunity for them to show what they can do. For the most part I thought guys played the right way.

Kinnear on German Rubtsov’s Checkers debut
Early on, he’s been out for a while and he was up to pace, but at then as the game wore on when you haven’t played for a while it dips a little bit. We’re excited to have him and we’re excited to build his game.

Despite the loss, the Checkers extended their franchise record point streak to 15 games (12-0-3). This was the team’s last regular season game at home … Dalpe played his 600th professional game. He leads the team and is tied for fifth in the AHL with a career-high 28 goals … True scored a goal for the third consecutive game, tying his longest streak of the season … After sitting out two games, Henman has goals in each of his last two … Aleksi Heponiemi had an assist to extend his point streak to four games (0g, 5a) … This was Hartford’s first-ever win in Charlotte. The Checkesr are now 16-0-1 against the Wolf Pack at home … Grigori Denisenko, John Ludvig, Max McCormick, Max Gildon, Henry Bowlby and Chase Priskie missed the game due to injury or illness … Antoine Bibeau was a healthy extra.