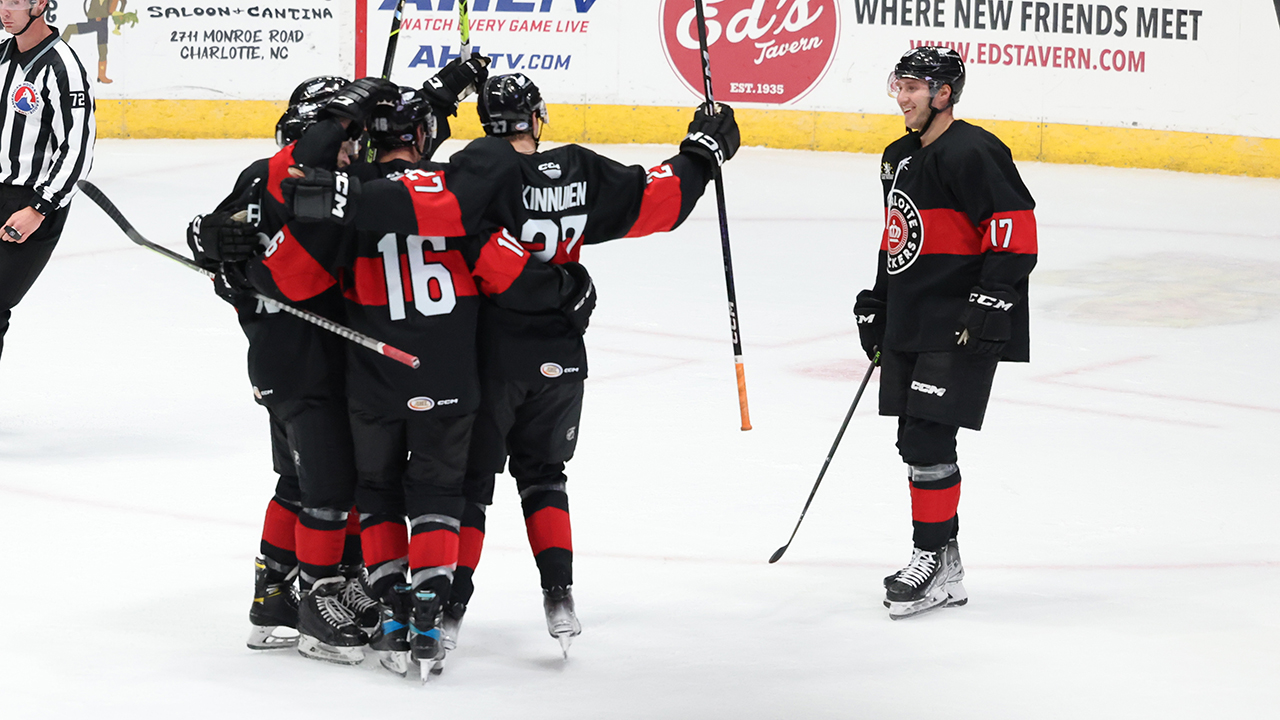 The Checkers found themselves in a steep deficit halfway through Friday’s matchup against Hershey, but they reversed their fortunes with five consecutive goals to pull off a thrilling comeback victory.

The Bears roared out of the gate with a tally just 75 seconds into play, then built up a 3-0 lead just past the midway point of regulation. The Checkers got a power-play opportunity late in the second, though, and Anton Levtchi lit the lamp to keep his hot streak rolling and breathe some life into the home side.

The Checkers carried that momentum into the third, as Gerry Mayhew potted his first of the year within the first 67 seconds to continue to tilt the ice in Charlotte’s favor. Zac Dalpe knocked in another to draw the score even minutes later, and as the Checkers continued to push down the stretch it was a Riley Nash redirection in the final five minutes that gave Charlotte its first lead of the night.

Dalpe buried one more into the empty net with under a minute to play for a goal that ended up serving as the winner - as Hershey notched one more inconsequential goal in the final second but the Checkers skated away with the victory.

SCORE SHEET PHOTO GALLERY
Coach Geordie Kinnear on the comeback
I give the guys a lot of credit. We didn’t start very well, and give full credit to Hershey because they started on time. We moved some things around, and it’s part of the process. Give the guys a lot of credit because they found a way to be in sync a little bit more as we moved forward and found a way to win.

Kinnear on the team’s mindset when down 3-0
We just wanted to build. We’re getting to know everybody as a group and they’re getting to know me as a coach. I’m proud of the guys for how they went from a low, because it wasn’t very good, and built it up to a real good third period.

Kinnear on team chemistry
There’s still a long way to go. I changed the lines part of the way through. Guys are going to have to tell me with their play if there’s chemistry there. We have to sync as a group first and then we’ll keep building the lines as we move forward.

Kinnear on the feeling after the win
Enjoy it right now, but we know we weren’t at our best. We’re still finding what our best is. It’s a process, but now we want to be more in sync for 60 minutes than we were tonight.

Checkers captain Zac Dalpe on the game
We obviously dug ourselves a hole. It was just a weird game. It’s something that you’ve got to find your identity early on and I guess you can add resiliency to that bag. It was a good win.

Dalpe on the team’s veteran leadership
Guys like Nasher, Tierney, Del Zotto, Bittetto – the list goes on. Guys that have played a lot of games in the other three-letter league. It just helps us calm down on the bench I think. We’re obviously all competitors, but the 72 games is more of a marathon than a sprint. Obviously you have to play the game within the game, which was tonight, and it’s huge to have those guys.

Dalpe on his first game back from an injury suffered during the preseason
Going headfirst into the boards first shift didn’t help, but it kind of woke me up and maybe uncrossed the wires a little bit. It felt good. You try to find your game early on in the season from the summer that you have. Point energy and goal energy never hurts, for sure.

Dalpe on the mindset for tomorrow’s rematch
Just clean up a few defensive zone breakdowns and put it behind us and put it to bed. Hershey is going to have a different game plan tomorrow and they’re going to come out hard. We’ve just got to match it and beat them.

The Checkers 3-0-0 start is their best since a team record 4-0-0 start to the 2018-19 championship season … Riley Nash (2g, 4a), Anton Levtchi (3g, 3a), Chris Tierney (1g, 2a) and Santtu Kinnunen (1g, 2a) are the only Checkers with points in all three games … Rookie forward Justin Sourdif had an assist for his first pro point … Dating back to last season, the Checkers have not lost a home game in regulation since Feb. 11 (18 games) … With Hershey falling off the list tonight, the Checkers are one of just two AHL teams with perfect records (San Jose, 2-0-0) … The Checkes went 2-for-3 on the power play and are now 5-for-13 on the season (38.5 percent) … Forwards Riley Bezeau, Ethan Keppen and Serron Noel, and defensemen Max Gildon and Zach Uens were healthy extras.