Checkers Fall In 2-0 Hole After Late Loss in Springfield 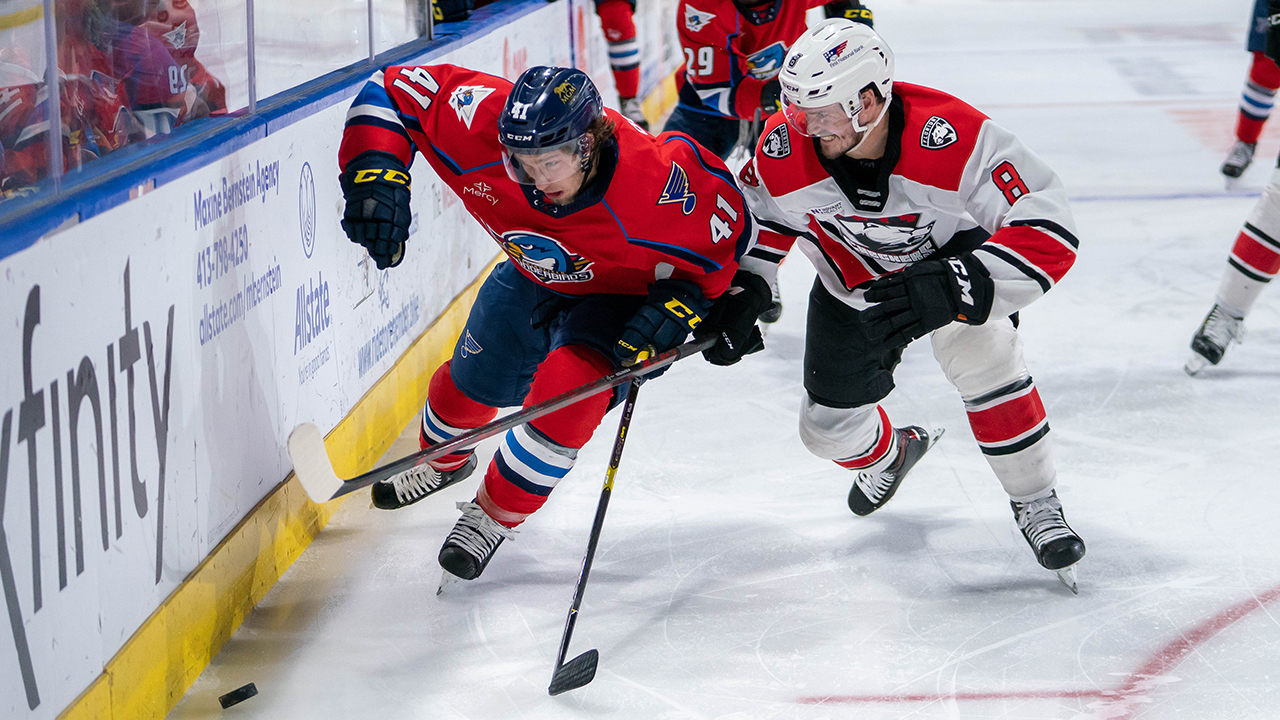 The Springfield Thunderbirds scored two goals in the last three minutes of regulation, including the winner with just five seconds left on the clock, to stun the Checkers with a 4-3 victory and take a 2-0 lead in the Atlantic Division Finals.

The series now shifts to Charlotte, where the Checkers must win three consecutive games, all of which would be played at Bojangles Coliseum, to advance to the next round. Game 3 is set for Saturday at 6 p.m.

Zac Dalpe scored two first-period goals for the Checkers, who jumped out to a 2-0 lead only to see the home team crawl back into the contest. Charlotte out-shot the Thunderbirds 50-23.
SCORE SHEET
It was a wild and unexpected finish to a game that had been deadlocked at 2-2 for a long stretch until Charlotte’s Alexander True gave his team the go-ahead goal on a deflection with 8:29 remaining in regulation.

That seemed like the goal Charlotte would need to earn the all-important split in the series, but the Thunderbirds tied it once again when Klim Kostin’s shot deflected off Will Bitten for the equalizer with 3:05 to go.

Penalty calls were the story of the final sequence, as Springfield captain Tommy Cross, who had scored his team’s first goal late in the first period, and Charlotte’s Max McCormick took coincidental rouging minors following Cross’ takedown of McCormick in front of the Charlotte goal.

Near the end of the ensuing four-on-four sequence and with 30 seconds left in regulation, Checkers defenseman Cale Fleury took a kneeing penalty while attempting to prevent Springfield’s Nathan Todd from cutting to the middle of the ice, setting up the power play that would decide the game. NHL veteran James Neal did the honors, deflecting second-period goal scorer Brady Lyle’s shot from the point past Joey Daccord for the back-breaking winner.

Springfield’s second goal also came on the power play, with Lyle capitalizing on a lengthy two-man advantage to tie the game at 2-2 after Charlotte defenseman Gustav Olofsson sent the puck over the glass for a delay of game penalty just four seconds after an elbowing call against McCormick.

The result marked Springfield’s ninth consecutive win dating back to the regular season and Charlotte’s first consecutive losses since dropping four straight from Feb. 20-27. Regardless of how the rest of their season plays out, Charlotte will finish the season winless in Springfield, going 0-3-1 in the regular season and 0-2 in the playoffs. The Checkers won two of four regular-season meetings at home.

On the calls late in regulation
I’m not sure how the game was called in the third period to be quite honest with you.

On so much of the game being played on special teams
Five-on-five is pretty important and I loved the way we played. We came up with the short end of the stick.

On his team’s effort
It was a great effort by everybody, I thought we played a real good road game in a tough building. That’s a really good hockey team. I’m disappointed by the outcome for numerous reasons.

On Chase Priskie playing forward
He’s a big part of what we do, he’s on the power play on the point, we’ve asked guys to step into different roles throughout the year, he did a good job tonight.

On the takeaway from tonight
I think we saw how we need to play.

On his message to his team
We played well, keep going.

Dalpe has seven goals in six playoff games. As of this writing, he ranks tied for second in playoff goal scoring behind Rochester’s Arttu Ruotsalainen, who has eight goals in 10 contests … The Checkers are out-shooting Springfield 85-51 for the series … In 13 total playoff series, this is only the second time the Checkers have lost the first two games. The other was part of a four-game sweep to eventual champion Binghamton in the 2011 Eastern Conference Final … Defenseman Chase Priskie started the game at forward … Luke Henman made his postseason debut for Charlotte.