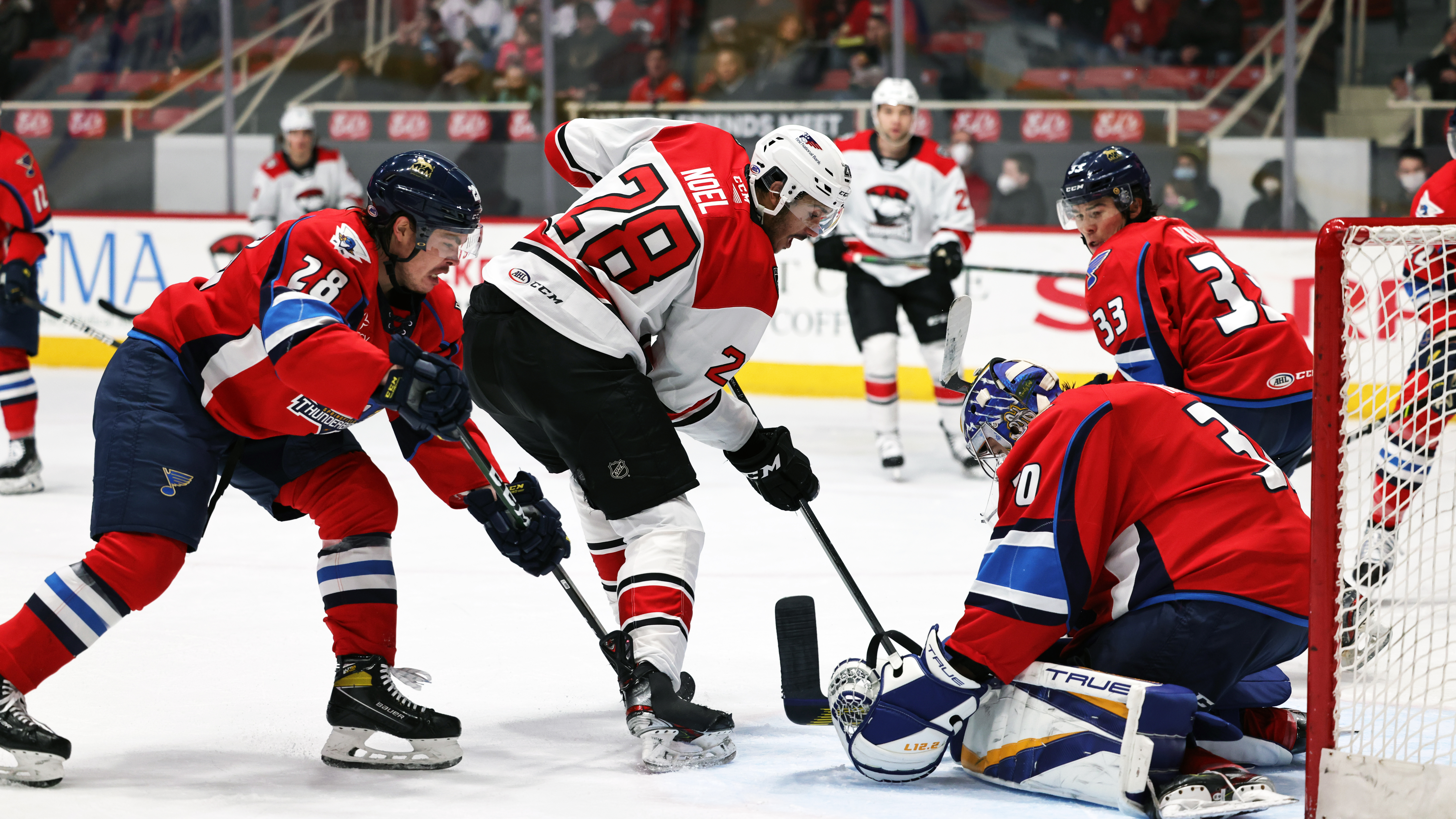 A tightly contested battle slipped away from the Checkers in the end on Tuesday, as they fell to the Thunderbirds 4-2.

The Checkers flipped the script for their previous few games and opened the scoring tonight, with Ryan Lohin knocking home a loose puck on the doorstep. That lead would hold until late in the middle frame when the Thunderbirds finally broke through, but the home side quickly reclaimed it with a Henry Bowlby strike early on in the third.

That advantage would be short-lived, however, as Springfield deadlocked things once again just a minute later. Both sides would trade chances down the stretch from there, but a man advantage midway through set up the Thunderbirds to jump back ahead for the first time all night.

The Checkers’ earned a power play of their own in the waning minutes of regulation but couldn’t quite find the equalizer, and an empty netter cemented their 4-2 defeat.

SCORE SHEET PHOTO GALLERY
Coach Geordie Kinnear on the game
I liked a lot of stuff about our game. I liked it a lot better than I liked the last game on Sunday. Kind of the turning point was when we were up 1-0, had them hemmed in for quite a long time, and then gave up that 2-on-1. They gained a little momentum after that. We scored a big goal in the (third) but then we gave it right back on a breakdown. A lot to learn, but I’m proud of the guys that came up and it was their first time playing for us. They stepped in and did a good job for us.

Kinnear on the back-and-forth nature of the game
At the end of the second period especially, we turned over pucks, they got momentum a little bit and we kind of stopped skating and watched a little bit. They started to take it to us. I thought we gained it back a little bit in the third but we couldn’t finish.

Kinnear on Ryan Lohin’s goal
Ryan is a goal scorer. He’s scored at the ECHL level and he’s starting to feel more comfortable here. That’s where we like - to score those playoff type of goals. We had looks in front and I thought their goalie came up with some key saves. Again, at 2-1, we’ve got to make sure we finish.

After hosting just 449 fans during Sunday’s snowstorm, the Checkers welcomed a sellout crowd of 8,309 for their annual 1950s Night promotion … The Checkers have lost two straight in regulation for the first time since Nov. 27-28 … Kole Lind, Connor Carrick and Cale Fleury all had one assist to extend their point streaks to three games … Forward Craig Martin made his AHL debut for Charlotte … Forward Spencer Asuchak made his Checkers debut … Forwards Grigori Denisenko and Luke Henman, defensemen Max Gildon, John Ludvig and Gustav Olofsson and goaltender Christopher Gibson missed the game due to injury … Defenseman Bobby Russell was a healthy extra.