Checkers Get Even With Chicago in Game 2 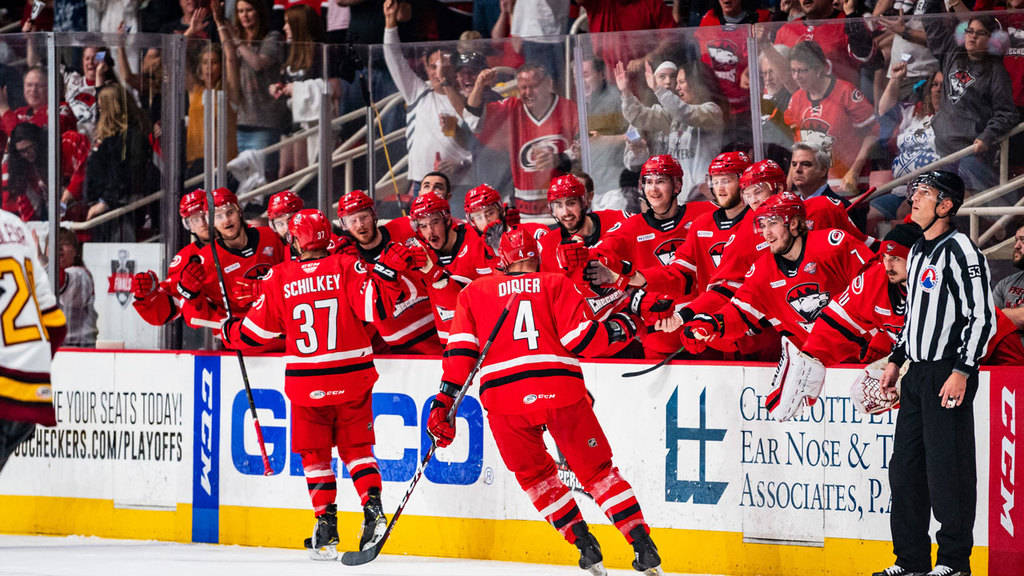 After a tough loss the night before, the Checkers rebounded as they have so many times this season, topping the Wolves 5-3 to pull the Calder Cup Finals even at one game apiece.

The scoring once again started with a bang, as Nick Schilkey converted a shorthanded breakaway less than four minutes in only to have Chicago even the score before the five-minute mark. The Checkers would break that deadlock early in the middle frame with back-to-back tallies from Nicolas Roy and Stelio Mattheos just 14 seconds apart, but the Wolves erased that lead just as they did the night before and drew the game back into a tie midway through the period.

The Checkers reversed their fortune in Game 2, however, as Tomas Jurco hammered a one-time feed from Martin Necas and squeaked the puck through Oscar Dansk in the final two minutes of the second to push the home side back on top heading into the final frame. Charlotte continued to buzz in the third and locked down their lead, holding the Wolves to just four shots in the period and tacking on an empty-net dagger to secure the win, but not before some fireworks. With under a second remaining on the clock tempers flared, resulting in 59 penalty minutes - including 27 to Chicago’s Curtis McKenzie alone.

Dustin Tokarski took the crease for Game 2 and emerged with his perfect record as a Checker unscathed, registering 20 saves for the win. 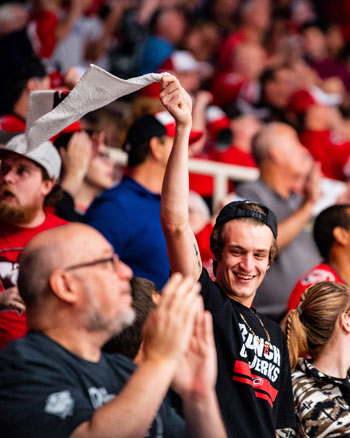 SCORE SHEET PHOTO GALLERY
Coach Mike Vellucci on the difference between Game 2 and Game 1
Not much, really. It was a close game. I just watched the chances and it was pretty even again. I thought two teams battled extremely hard. It’s hot in the building and it was back-to-back games so it was tough after overtime last night to get going. Once we got going in the second period we got some big goals. We gave up a lead again and stayed with it, and that’s what we talked about. They’re a great team, and it’s the finals.

Vellucci on goaltender Dustin Tokarski
We got Tick to fill in when he can. He’s a veteran leader and everybody plays well in front of him. He’s got a great record, and if you look at the analytics they’ll tell you that the percentages favor to start another guy in a back-to-back.

Vellucci on the penalty kill
It’s huge. It helped us. Obviously we won the Toronto series because of our penalty kill and because we had four shorthanded in our last three games. To get another one tonight was huge and to get us going with momentum. The penalty kill has been good for us all year, and that was the one thing we came to this year and said we were going to improve. Last year we talked about scoring more goals and improving the power play. This year was tightening up on our D and getting better on the PK.

Vellucci on the incident in the final seconds of the game involving Chicago forward Curtis McKenzie
I used to have respect for a guy that played 100 games in the NHL, but he hit a defenseless player four or five times. I just watched the video. He hit him four or five times when he was on the ice. There’s a code in hockey, and he should know it and everybody knows it. To hit a defenseless player that many times when he’s down, I hope somebody takes care of what he’s supposed to do from the league standpoint. I used to have respect for somebody that played 100 games in the NHL, but that was bush league.

Vellucci on going to Chicago
I expect it to be a tough building and it’s going to be loud, but tonight was awesome here. The last two nights, I couldn’t be more of Charlotte and our fans. They came out to support, and they were loud. It was awesome, and I’m very proud to be able to coach a team in Charlotte.

Tomas Jurco on this game vs. Game 1
I think we were a little harder to play against and worked really hard. It’s a sport, and one day you can do the same things and it goes the other way than the other day. Today it went our way and we’re happy and we’ve just got to keep doing it.

Jurco on his goal
It was a relief. I’ve had many chances in the last couple of games and I couldn’t score, so that one felt really good.

Jurco on the mood on the bench when the team gave up a 3-1 lead
We got a little quiet and everybody knew what we were playing for. It took us a couple of shifts and we were right back at it. We did a really good job to stay in the game and that was the key.

Stelio Mattheos on his goal that was scored 14 seconds after Nicolas Roy’s in the second period
We had just scored, so I was trying to have a good shift after that. The d-man lost his stick so I just tried to get around him and once I got past him just tried to find a lane to the net.

Mattheos on getting into the lineup in a Calder Cup Finals just two months into his pro career
It means a lot. One of the things I wanted coming in was to gain the coaches’ trust as quick as I can. These are big games and they matter, so it means a lot to get the opportunity to play.

Mattheos on the team going 47-0-0 when leading after two periods this season
We’re just a really deep team and the guys here want it bad. They want to win bad. We’re a tight group and I could tell that coming in right away. Guys are willing to do anything for each other.

Mattheos on going to Chicago for the next three games
It’s a best-of-five now and we’re going on the road, but we’ve done well on the road this postseason. We’ve just got to bear down, and obviously every game is huge. It’s a best of five and we hope to get the next one.

The crowd of 8,378 was the third-largest the team has ever had at Bojangles’ Coliseum, trailing only last night’s record crowd of 8,465 and Game 6 of the Eastern Conference Finals exactly one week ago today (8,393) … The Checkers avoided suffering consecutive losses for the first time since Feb. 9-10 … Dustin Tokarski improved to 11-0-0 as a Checker with just 13 total goals allowed … After going 52 games without scoring a shorthanded goal from Dec. 31-May 21, the Checkers have five in their last five games … The Checkers are one of four teams to score five shorthanded goals in a single playoffs since Milwaukee set the league’s all-time record with seven in 2006 … The Checkers improved to 47-0-0 when leading after two periods this season, including 9-0-0 in the playoffs … Jurco had nine shots on goal, tying the most by a Checker in a single game this season (Nicolas Roy on Oct. 5) … Poturalski’s goal gave him 20 points in the playoffs, which is at least four more than any other player … Forward Julien Gauthier and defenseman Dan Renouf missed the game due to injury … Forwards Scott Davidson, Jacob Pritchard and Zack Stortini, defensemen Dennis Robertson and Bobby Sanguinetti and goaltender Jeremy Helvig were healthy extras.

The series shifts to Chicago for Games 3-5 this coming Wednesday, Thurday and Saturday.