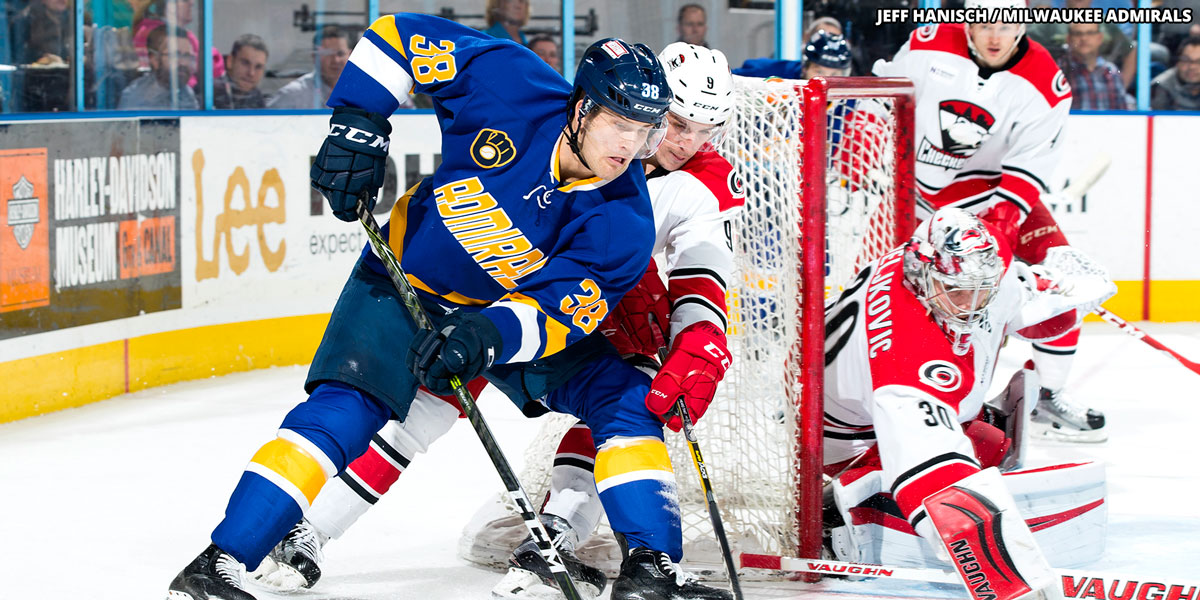 The Checkers lost a 3-1 lead in the first period and also lost star goaltender Michael Leighton to injury during a disappointing 6-3 loss in Milwaukee on Friday.

Valentin Zykov, Andrew Poturalski and Phil Di Giuseppe scored for Charlotte, which saw its three-game win streak come to an end despite the impressive opening frame that contained two power-play goals. Leighton, who had allowed just three total goals over the course of a personal three-game win streak, stopped 15 of 16 shots in 26:57 of game action.

The first and second halves of the game could not have been more different, with the Checkers storming out of the gates with Zykov’s goal just 1:21 into the contest and tacking on a pair of power-play strikes after the Admirals’ Vladislav Kamenev surprised Leighton with a short-side backhander.


Score SheetPhoto Gallery
Once Leighton left the game after attempting to fight through an ailment that had seen him consult with the Checkers’ medical staff on at least one previous occasion, the Admirals seized the momentum. In the last 12 minutes of the second period following the goalie change, the Checkers mustered just one shot on goal while allowing the Admirals to score once on Alex Nedeljkovic.

The third period was tightly played until the Admirals’ tying goal with under five minutes remaining, which came on a beautifully-executed, three-on-two rush finished by Kevin Fiala. From there, Milwaukee would get a winner off the stick of Justin Kirkland, who fired a perfectly-placed shot from the left circle off the rush, and two empty-net tallies to seal the victory.

When everything was said and done, the Admirals had scored four times in the last 4:27 of the contest.

Charlotte will have little time to dwell on the defeat as they continue a three-games-in-three-nights set with a Saturday night matchup in Rockford and a Sunday afternoon rematch against the Admirals.

Kamenev went on to record a hat trick, making him the second player to do so against the Checkers this season (Rockford’s Brandon Mashinter) … This marked the third time that the Checkers have scored multiple power-play goals in a single game. Including this 2-for-2 performance, they are now 4-for-13 (30.8 percent) in their last four games … Charlotte lost in regulation for the first time this season when scoring three or more goals (19-1-1) … Lucas Wallmark had two assists, giving him 14 points (8g, 6a) in his last 15 games … Charlotte fell to 7-13-2 on the road this season. The team is 15-6-1 at home … Forwards Patrick Dwyer, Kyle Hagel, Sergey Tolchinsky and Brendan Woods missed the game due to injury … Defenseman Kevin Raine was a healthy extra.