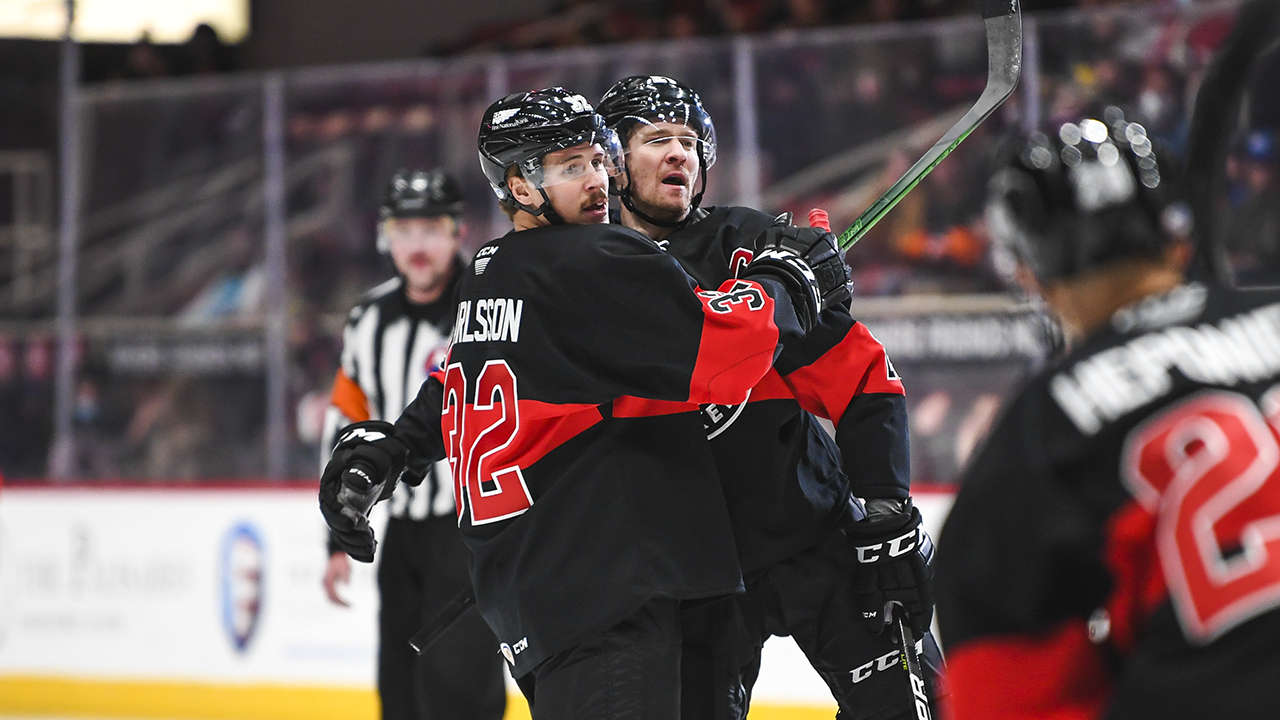 The Checkers welcomed a raucous crowd back to the Coliseum with a bang Saturday night, flattening the Phantoms 7-3.

The offense came alive early for Charlotte, with Luke Henman notching his first pro goal less than two minutes in, and the home side never took the foot of the gas. A long power play sparked the offense once again after that and the Checkers headed into the intermission with four goals under their belt.

Not content with that output, the Checkers kept pushing in the middle frame to tack on three more, building up a 7-3 lead before the second intermission that would stand for the remainder of regulation and seal a lopsided victory.

Charlotte’s production came from across the board, with six different skaters lighting the lamp for the home squad. Captain Zac Dalpe found the back of the net twice and Aleksi Heponiemi racked up three points to lead all skaters, while Logan Hutsko extended his red-hot start and Alex True notched his third multi-point game of the season.

In his first start with Charlotte since returning from an NHL stint with Seattle, Joey Daccord provided a strong backstop for the team’s offensive explosion by stopping 26 of the 29 shots he faced. 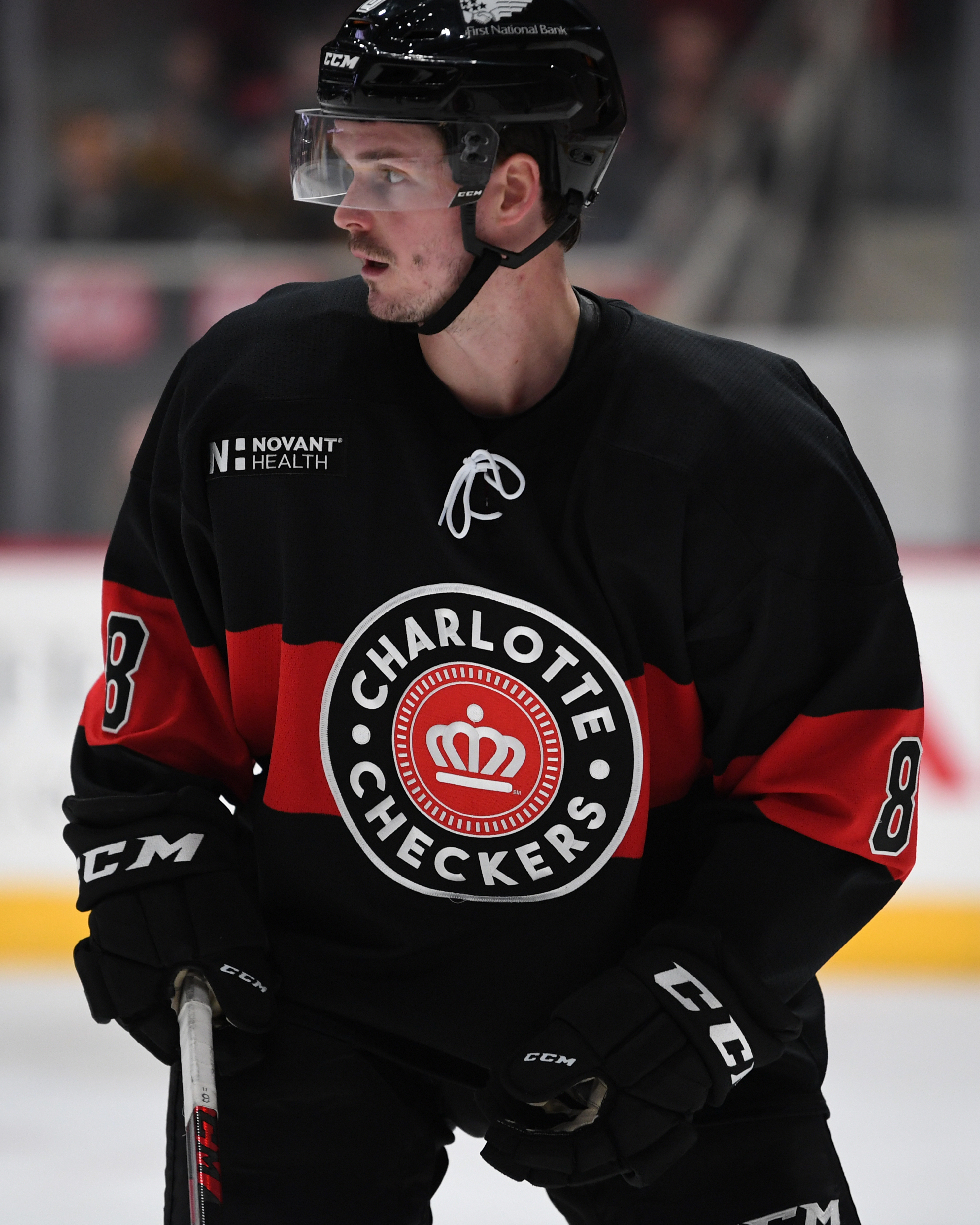 SCORE SHEET PHOTO GALLERY
Coach Geordie Kinnear on the power play starting things off in the first period
I thought the power play did a great job and scored some big goals. They took the five-minute major, and you want to make sure you hold them accountable.

Kinnear on responding to Lehigh Valley’s goals
It’s an important skill to be able to bend but not break, and I thought we did a lot of that. Overall it’s a good win, but we’ve got to put it to bed and get better tomorrow.

Kinnear on preparing for tomorrow’s rematch
We talk about it all the time. We don’t want to look in the rear view mirror. Enjoy the win tonight, but come tomorrow we have a laser focus on the task at hadn. That’s to win the first shift and then build after that.

Luke Henman on his first professional goal
It feels great. It’s great to get the win and when you get one on your first shift it kind of gives you a boost for the rest of the game. It was nice to get that out of the way, especially to do it here at home in front of the fans. It was really special.

Henman on getting back in the lineup
When you get in the lineup you’ve got to show you belong there and show the coaches that they’ve got no choice but to keep you in. That’s what I’m trying to do every day. I’ve still got things to work on and I’m still getting use to the speed, but it feels good to get that one out of the way.

Henman on building as a team
It’s definitely great. We’re really starting to come together as a group. Being a split team, we’ve got a lot of new faces for everyone and everyone is trying to get to know each other. I think as you watch each game, we’re getting better and better every game. We’ve got to build on what we did today and bring it tomorrow.

Zac Dalpe on the mood in the dressing room
I like when it can sound like a school bus instead of a school library. I don’t want it to be quiet, and obviously after a loss you can’t celebrate you’re victory. It’s a good feeling. You put the win song on, guys are talking and guys are chatting. IT’s something that you want to do again, for sure.

Dalpe on his goals
I’ve been snakebitten a bit to start the year. I don’t want to be the old wily vet, but something I’ve learned over the years is that it’s a long season. Geordie talks about having skin in the game, and I feel like I have. If you work hard, the hockey Gods will reward you.

The postgame specialty jersey auction raised $29,067, with a portion of the proceeds benefitng the Novant Health Foundation and the Checkers Charitable Foundation … The Checkers’ seven goals tie the most by an AHL team this season (five other times) … It was the most the Checkers scored since another 7-3 home win, this one over Toronto, on Jan. 19, 2018 … Heponiemi’s three points were an AHL career high … Hutsko has eight points (3g, 5a) in eight professional games. He has scored in all but one game this season … Lucas Carlsson was plus-1 and leads the league with a plus-10 rating for the season … The Checkers are tied for second in the league with two shorthanded goals this season … The Checkers have scored multiple first-period goals in each of their last three games.