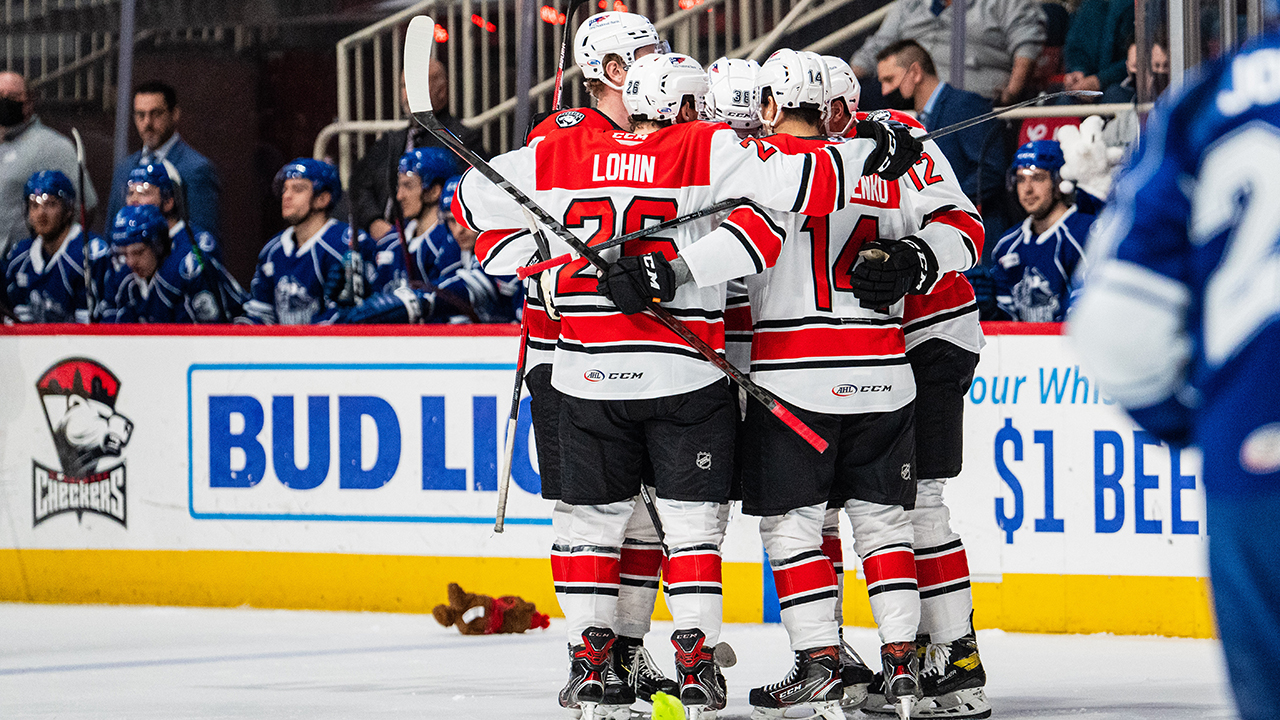 The Checkers rattled off a thrilling comeback on their annual Teddy Bear Toss Night, notching four straight goals in the third period to stun the Syracuse Crunch 5-3.

Finding themselves down 3-1 midway through the final frame, the Checkers got the spark they were looking for when Connor Carrick launched a shot from center ice that found the back of the net. Cole Schwindt lit the lamp minutes later to even the score, and a power-play opportunity in the final three minutes to set the stage for the comeback capper.

Cale Fleury ripped a point blast on that man advantage that snuck through traffic, giving the Checkers their first lead of the night and electrifying the raucous crowd. That would be all the home team needed, as they shut down the Crunch’s final punch and took home the victory.

Fleury’s game winner was his second of the night, as he lit the lamp less than three minutes in to trigger the annual Teddy Bear Toss, which saw the fans contribute over 4,000 stuffed animals to be donated to local causes.

Devan Dubnyk made his Checkers debut in the crease tonight - his first game action since the end of the 2020-21 season - and made 17 saves to pick up the win.

SCORE SHEET PHOTO GALLERY
Coach Geordie Kinnear on coming back in this game
I think it was important that when we didn’t score on the five-on-three at the end of the second period, we didn’t really change our mindset. We stuck with it, we knew we had a lot of zone time and we wanted to score there, but we stuck with it. As I always say, when you work hard and play the right way, you never know when you’ll be rewarded. We obviously got rewarded with some good breaks, but you always earn those.

Kinnear on Cale Fleury
He just comes to work. He’s ultra competitive, he plays hard all the time and he’s a great teammate. We’re happy and lucky to have him. I’m glad he got rewarded because he’s played a lot of hard minutes for us.

Kinnear on Devan Dubnyk
He has experience. He’s a big body that never got fazed after a couple of those goals. He shut the door and allowed us to be able to come back. You could see his experience, and he’s only going to get better and better as time goes on.

Kinnear on his team’s effort
To be a really good hockey team you have to have special discipline and I thought we were really disciplined tonight. I thought we had four lines going tonight that I trusted and were playing the right way. It paid off in the end.

Cale Fleury on his Teddy Bear Toss goal
It’s my first Teddy Bear goal so it’s a pretty cool experience. I’ve always wanted to score one and it was nice to get it.

Fleury on Connor Carrick’s goal from center ice starting the comeback
I feel like we kind of earned our bounces tonight. I felt like we deserved a couple more before that, but that just kind of opened the floodgates for us.

Fleury on how that goal gave his team momentum
I think it says a lot. That’s two games in a row that we haven’t quit when we’ve been down a couple of goals. It was really nice to get the W tonight.

Fleury on how to build on this win
We just need to stay focused on our game plan. When we play the way we know we can and do that for 60 minutes, there’s not many teams that can beat us.

The Checkers collected a team record 4,000 stuffed animals in their 12th annual event. They will donate the animals to local nonprofit organizations including Baby Bundles, The Sandbox, Alexander Youth Network, Alliance Center for Education, Pat’s Place and Giving Tree Charity so that children may enjoy them during the holiday season … This was Fleury’s first multi-goal game as a professional. Of his four goals this season, three have come in his last four games … Even with two missed five-on-threes in this game, the Checkers still scored four power-play goals on 10 opportunities over this two-game series with Syracuse … Dubnyk played his first AHL game since April 9, 2014. Both teams involved in that game (Hamilton and St. John’s) are no longer in the league … Schwindt is now tied for second among AHL rookies with a team-best nine goals … In his second AHL game of the season, Ryan Lohin picked up his first point as a Checker with the lone assist on the Teddy Bear goal … The Checkers played without scoring leader Alexander True, who was recalled to Seattle earlier in the day, for the first time this season … Defenseman John Ludvig and goaltender Christopher Gibson missed the game due to injury … Goaltender Joey Daccord, assigned from the NHL’s Seattle Kraken earlier in the day, had not yet arrived in Charlotte and was a healthy extra.