The Checkers jolted back to life after falling into a deep deficit in Chicago, but couldn’t quite complete the comeback, falling to the Wolves 5-3.

Chicago’s high-powered offense built up a 4-1 lead seven minutes into the third period and looked like they would be cruising to a victory, but the Checkers refused to roll over. A strong push back in the latter half of the third period led to Charlotte collecting a pair of power-play goals to climb within one goal of the reeling Wolves late. 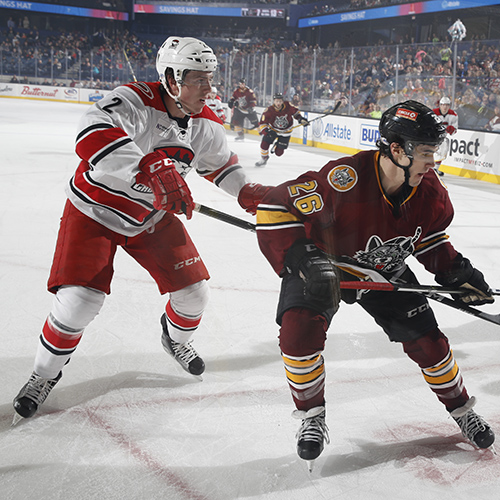 Score SheetPhoto Gallery
The Checkers got one more shot to tie things on the man advantage with under two minutes to play, but utilizing an extra attacker backfired, and former Hurricane Brad Malone deposited an empty netter from across the length of the ice to seal Charlotte’s fate.

Tonight’s loss snapped Charlotte’s seven-game road point streak, their longest this season … The Wolves have now earned at least a point in the standings in each of their last six meetings with Charlotte … Chicago netminder improved to a perfect 4-0-0 against the Checkers this season … Andrew Miller extended his point streak to four games, while Valentin Zykov ran his to three … Aleksi Saarela’s goal gives him a point in each of his four games with Charlotte this season … Trevor Carrick now has points in consecutive games for just the second time this season … Chicago’s four goals are the most allowed by the Checkers since Bakersfield scored seven on March 5. Charlotte has gone 9-1-1 since then … Tonight was the fourth time this season that the Checkers have scored multiple power-play goals in a game and the first since Feb. 17 … Charlotte held their opponent’s power play scoreless for the third straight game, matching the team’s season-long stretch … The Checkers’ 39 shots on goal are the most since Feb. 2 … Erik Karlsson, Michael Leighton and Kyle Hagel missed the game due to injury … Clark Bishop, Kris Newbury, Hudson Elynuik and Tyler Ganly all served as healthy extras … Danny Kristo was a late scratch for an unknown reason

The Checkers now return home for their final home stand of the season, a four-game set kicking off Tuesday at 7 p.m. against San Antonio.