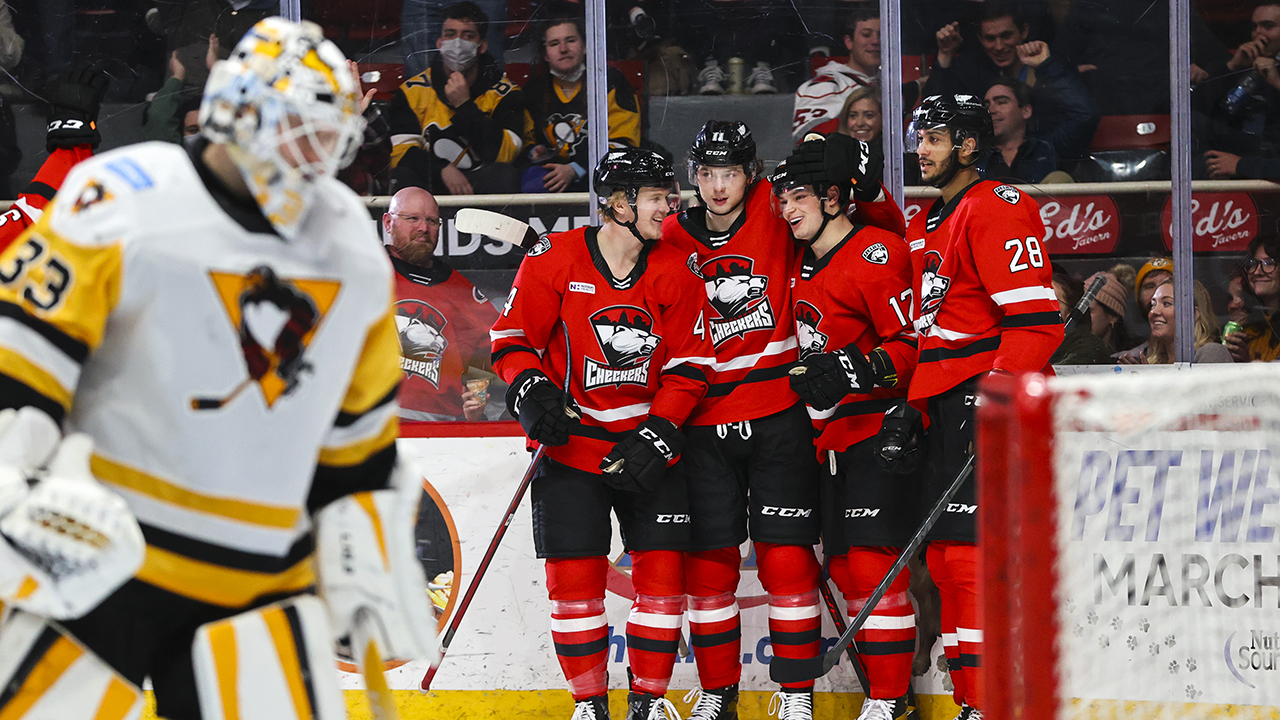 The Checkers took hold of their rematch against the Penguins early and never let go, walloping Wilkes-Barre/Scranton 4-1 in front of a wild Winning Wednesday crowd.

Zac Dalpe knocked in the rebound of his own shot just 85 seconds into the game, and that would kick start the Charlotte attack. Carsen Twarynski capitalized on an odd-man rush in the middle frame to double the lead, then Connor Carrick ripped a one-timer on the man advantage minutes later to extend that even further.

Henry Bowlby kept the ball rolling with a slick finish in close to start the third and - despite a late breakthrough by the Penguins - that was more than enough for the Checkers to coast on to a weekday sweep of Wilkes-Barre/Scranton.

The two sides each fired 23 shots on goal throughout the night, and Joey Daccord was a formidable backstop for the Checkers - keeping the Penguins at bay and notching 22 saves.

Bowbly finishes it off but also can we talk about the setups from Noel tonight pic.twitter.com/MsrWQSb5C0

SCORE SHEET PHOTO GALLERY
Coach Geordie Kinnear on the game
I thought we came out in our last three or four games at home and hadn’t looked like we were on top of it and had great energy. Tonight at the start was how we want to play. We were clean coming out of our zone and guys were making plays. It kind of got away from us a little bit with the turnovers and the penalty in the first period, but I felt good about our group and I felt everyone was going. I thought the third period was obviously our best period. We went into, not shutdown mode, but we played the right way with the lead.

Kinnear on holding the lead
I thought guys started to dial it in and managed the puck better so that we could play on our toes. Obviously Joey had a really good game, but I thought it was a total team effort.

Kinnear on Joey Daccord
He was sharp. It hasn’t gone his way since he’s come back, but his work ethic in practice and his energy has been great, and then he had a great game for us tonight. It was just a matter of time before he dialed it in.

Serron Noel on the game
I think we were just responsible with the puck. We didn’t really have too many turnovers at the blue line and we made sure to hang on to it down low and made them play defense. I think we took advantage of them in the d-zone, too.

Noel on the strong start
Just the preparation. Our coach came in with a good game play, and right from the start we were all over them. That created the momentum that shifted toward the win, which was great.

Noel on Daccord
He’s our rock. He’s so solid in net and we’re always confident when he’s in the net. He’s a great goalie and we’re lucky to have him.

The Checkers’ third straight win ties their longest streak of the season set three times previously … The Checkers improved to 5-1-1 against Wilkes-Barre/Scranton this season … Dalpe tied Scott Wilson for team goals lead with 18. That ties them for 8th in the AHL … Carrick has six points (3g, 3a) in his last seven games. His eight goals are tied for second most among AHL defensemen … Noel had two assists for his second career multi-point game … Wilson has 12 points (7g, 5a) in his last 12 games … Kole Lind had an assist to extend his point streak to five games (3g, 2a). He has 14 points in his last 14 outings … Grigori Denisenko, Max Gildon, John Ludvig, Gustaf Olofsson and Christopher Gibson missed the game due to injury … Antoine Bibeau, Brandon Fortunato, Ryan Lohin, Justin Nachbaur and Blake Siebenaler were healthy extras.