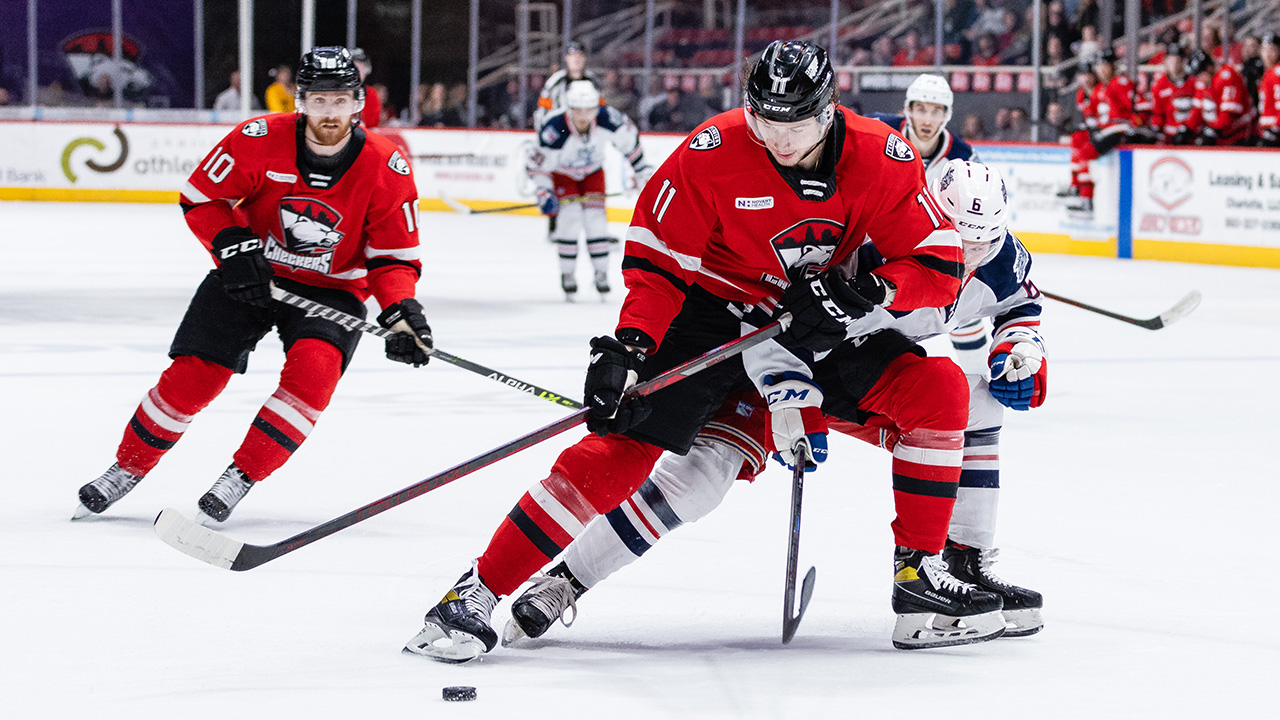 A clutch goal from Connor Carrick lifted the Checkers’ home hot streak at home to historic heights, as they defeated the Hartford Wolf Pack 4-1 to earn a point in each of their last 13 contests.

Locked in a 1-1 duel midway through the third period, Charlotte pounced on a power-play opportunity as Connor Carrick hammered a one timer from the left circle that slid right over the shoulder of Hartford netminder Keith Kinkaid and put the home side on top.

The Checkers buckled down from there, surrendering just four shots throughout the final frame, and a pair of empty-net tallies - including a full-ice deposit from Carrick - cinched a huge win for Charlotte.

Christopher Gibson, making his first start since November, was a solid piece between the pipes, finishing the night with 22 saves on the 23 shots he faced.

Stick taps for the best home-ice advantage in the league 🙌 pic.twitter.com/evTaONkYVC

Kinnear on Scott Wilson’s fight sparking the team
It doesn’t matter who it is. Willy has obviously been a great player and has scored a lot of big goals for us. He’s invested, he’s shown a lot of emotion and he got me going too.

Kinnear on Connor Carrick’s game-winning goal on the power play
We executed. You look at why the power play goal was scored, we weren’t great on faceoffs all night but Dalps (Zac Dalpe) dug in and won four in a row there and it ended up in the back of the net. It’s always a team effort, but obviously Connor has a big shot and he executed.

Kinnear on Christopher Gibson winning his first start since Nov. 28
I see a guy that worked hard in practice to get back and be a part of the group. It’s no secret that when you work hard you get rewarded for it.

Kinnear on the team setting a new franchise record with a 13-game point streak at home
Charlotte is a special place. Bojangles is a special place. The fans are into it, they’re energetic and they’re passionate. That’s what we’re about too, energy and and passion.

Connor Carrick on the difference in the game
The power play is where we ended up scoring the winner. We had some chances the first time around, and then sometimes later in the game the guys that kill a lot get a little tired and a little sloppier in their reads. Offensively, we had a good look and were able to score. I think both goaltenders played well and both teams had looks. Gibby has had a tough year with injury and things like that, and that was a huge game for him. He showed up huge for us and was a key part of our win.

Carrick on how the defense supported Gibson
Anytime you can limit the secondary opportunities, goaltenders are going to be good on the first one and they’re going to be good when they can see it. Hartford, clearly they want to send a lot of junk on the net and they want to send two or three bodies on faceoffs and things like that. We were able to keep it clear for the most part and had a couple of key blocks.

Carrick on Wilson’s fight
There are certain guys that draw your team into the fight. You''re not going to have your A game all the time and I don’t think that was an A game for us. He meant business. There’s a difference between just playing and competing, and our coaching staff demands that we compete. We’re a group that’s comfortable having a bad shift, not that we like it, or comfortable having a bad period, not that we like it. It’s unacceptable to have a bad game. I think that was a way to change the tide.

The Checkers are 11-0-2 in their franchise record point streak that began Feb. 12. The previous record was set during the team’s 2018-19 championship season … Charlotte’s magic number to clinch a playoff spot is down to one heading into tomorrow’s rematch … Carrick extended his point streak to three games (1g, 2a) … Connor Bunnaman and Patrick Giles each earned their first points as Checkers with assists on Priskie’s goal. It was the first pro point for Giles … After going five straight games without a power-play goal (0-for-16), the Checkers have scored in three straight (4-for-12) … The Checkers are 3-0-0 against Hartford this season … Grigori Denisenko, John Ludvig, Max Gildon and German Rubtsov missed the game due to injury … Luke Henman, Zach Uens and Antoine Bibeau were healthy extras.