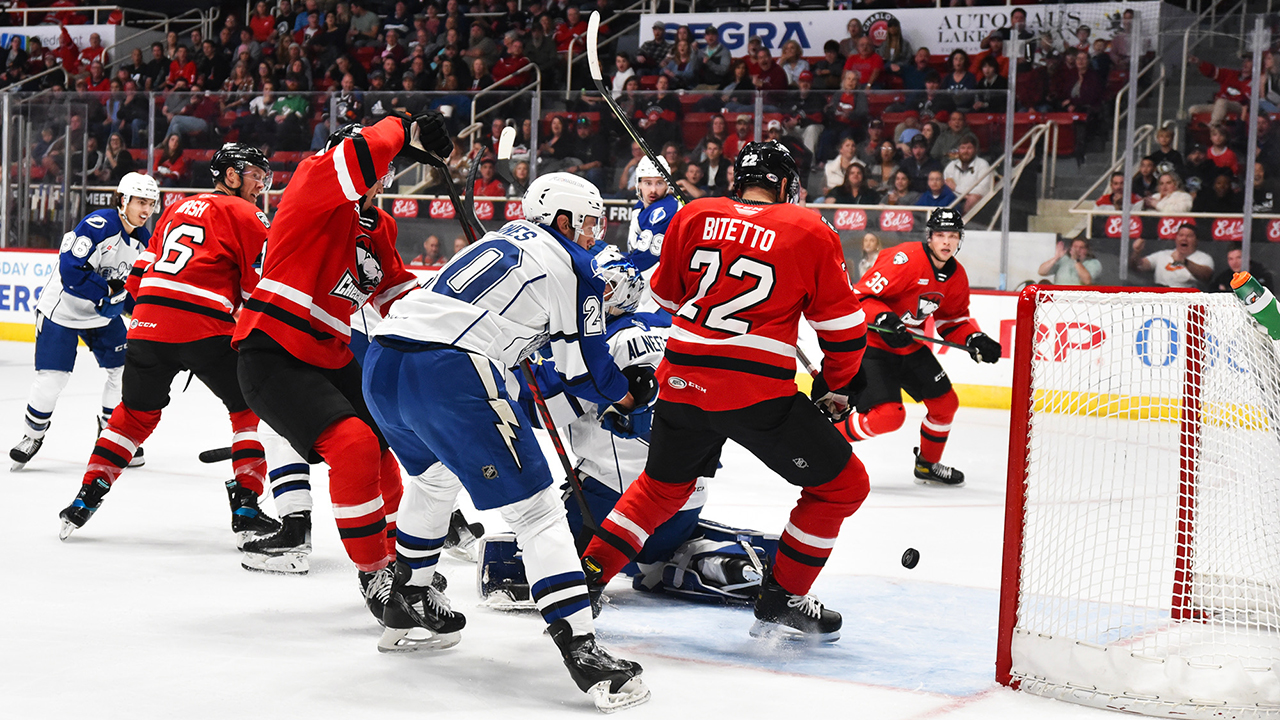 The Checkers’ magic on home ice ran out Saturday night, as they fell to the Crunch 4-0 for their first home loss of the season.

The two sides were locked in a scoreless tie for the first frame, but the Crunch broke things open in the second with back-to-back tallies just four minutes apart to claim a lead.

That would prove to be more than enough for the visitors, as the Checkers pumped 28 shots on goal across the contest but couldn’t solve Syracuse netminder Hugo Alnefelt, coming close on two near misses that withstood video reviews. Charlotte attempted a rally with an extra attacker down the stretch, but the Crunch took advantage for a pair of empty-net daggers to clinch the 4-0 final and snap the Checkers’ home hot streak.

SCORE SHEET PHOTO GALLERY
Coach Geordie Kinnear on the game
I thought they made more plays than we did. I thought they had a little more compete than we had, but I knew it was going to be that type of game where mental toughness has to come into play. We broke in the second period at 4-on-4 and we can’t do that. We’ve got to be mentally tough all the way through. There are going to be times where you bend but make sure you don’t break. We broke in the second period.

Kinnear on the team not converting scoring chances tonight
Confidence is a wonderful thing. When you’re confident and scoring goals it looks easy, so the guys are just fighting that a little bit. Their work ethic is where it needs to be, and those will come over time as long as you stick with it. Again, that mental toughness is a pretty strong trait to have.

Kinnear on giving up goals at 4-on-4
Three in two games. It’s something we want to correct. Again, we broke down mentally and they have some good players over there that are elite scorers and they’re going to be able to capitalize on them. Obviously we have to clean that part of it up.

Kinnear on moving forward
Nothing changes for us. Win, lose – just keep moving on and getting better. Learn lessons along the way, and we learned a few tonight that we’ve got to correct. Now we’ve got to go on the road and win some hockey games.

This was the Checkers’ first regular-season home loss in regulation time since Feb. 11 of last season. They were 17-0-3 during that run … This was the team’s first time shut out at home since a 1-0 loss to Utica on Nov. 27 of last season … Syracuse netminder Hugo Alnefelt made 28 saves for his first career AHL shutout … Forward Riley Bezeau and defenseman John Ludvig missed the game due to injury … Forward Serron Noel, defenseman Max Gildon and goaltender Alex Lyon were healthy extras.