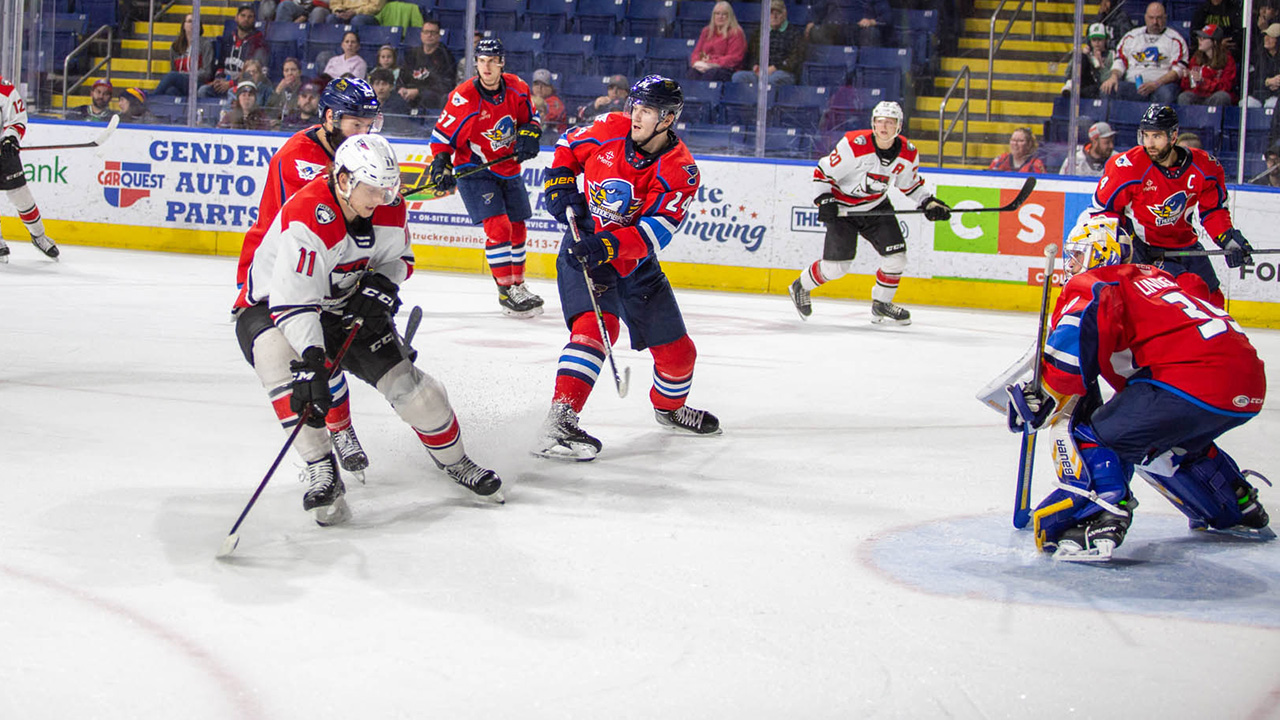 A tight matchup between the Atlantic Division’s top two teams ultimately went to the home side as the Springfield Thunderbirds topped the Checkers 2-1 in the shootout.

Charlotte earned one point from its two-game trip to Massachusetts, allowing the Thunderbirds to move into a tie for first in the division.

After out-shooting the Thunderbirds 12-3 in the third period, the Checkers also had the better opportunities to put the game away in overtime but Springfield netminder Charlie Lindgren (37 saves) was up to the task. The only goal of the shootout came on the very first attempt, with Springfield’s Sam Anas scoring while the Charlotte trio of Zac Dalpe, Cole Schwindt and Scott Wilson all came up empty.


SCORE SHEET
It was the first shootout loss of the season for Charlotte, which fell to 4-1.

The result dampened an outstanding outing for Charlotte goalie Christopher Gibson, who stopped the game’s first shot on a breakaway and stayed strong throughout his 31-save effort. Despite the overtime loss, the Checkers have a standings point in 17 of their last 20 games (14-3-3).

Henry Bowlby, who did not play in the previous game, got the Checkers on the board first when his backhand swipe at a loose puck found its way past Lindgren at the exact halfway point of the opening period. It was the 12th goal of the season for the Checkers’ No. 12.

The game swung in Springfield’s favor late in the second when a forechecking Nikita Alexandrov batted down an attempted saucer pass between Checkers defensemen and quickly roofed a shot over Gibson. Just moments later, Charlotte missed a golden opportunity to reclaim the lead through two consecutive Springfield penalties that overlapped for 19 seconds worth of a two-man advantage.

For the night, Charlotte finished 0-for-4 on the power play while Springfield was 0-for-3.

The Checkers have just two games left in their regular season – road contests in Hartford and Providence next Friday and Saturday, respectively.

As of now, Charlotte holds a tiebreaker over Springfield by having one more regulation victory. Both teams have a .614 points percentage, while third-placed Providence could climb to .609 with a victory later tonight. The top two teams earn a first-round bye in the playoffs … The Checkers fell to 2-4-2 against Springfield this season, including three straight losses. Two of those were in overtime/shootout … The Checkers’ scratches were Grigori Denisenko, Max Gildon, Max McCormick, Logan Hutsko, Dennis Cesana, Zach Uens and Antoine Bibeau … With Hutsko out tonight, Schwindt is now the only skater to appear in every Checkers game this season.