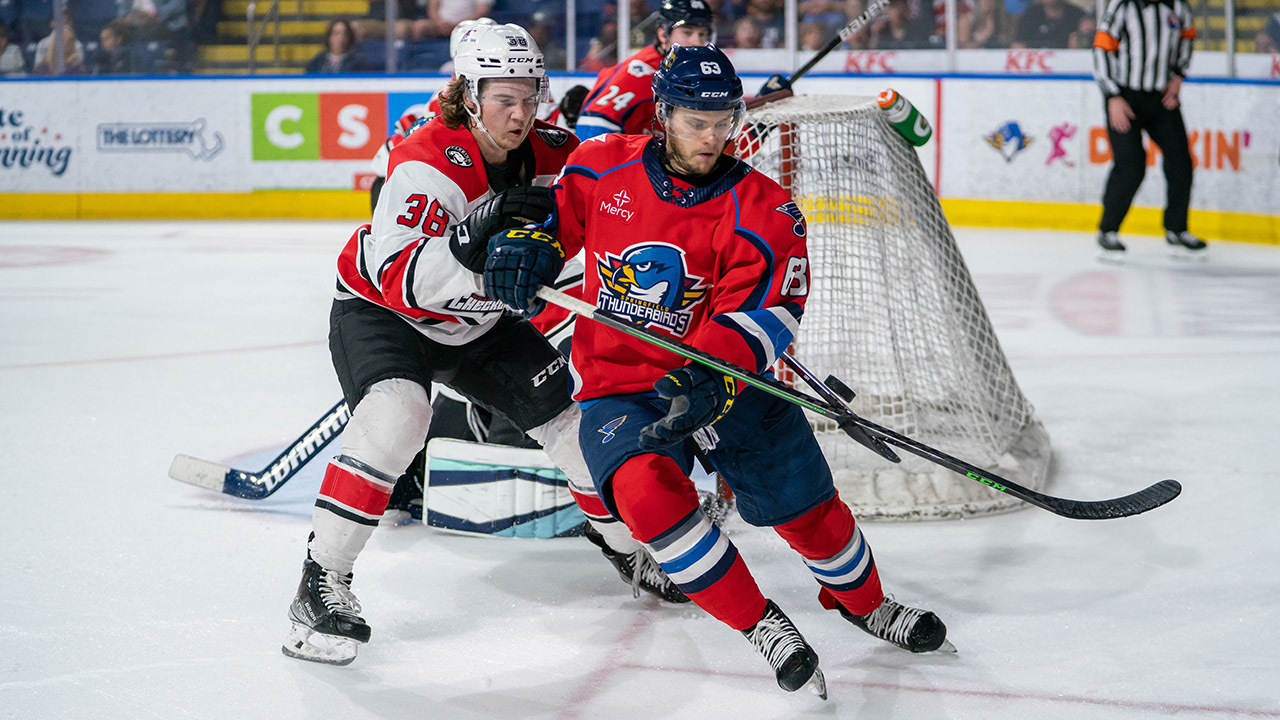 The Checkers’ third-round series did not start anywhere close to the way they had hoped, as the Springfield Thunderbirds skated away with a 6-0 victory in Sunday’s opener.

Goaltender Joel Hofer pitched a 35-save shutout for the Thunderbirds, who broke a previously close game open with four third-period goals. The result marked the first time the Checkers have suffered a shutout in a playoff game since 2011, and also their most lopsided playoff loss since 2013.

Sam Anas (2g, 1a) and Matthew Peca (3a) led Springfield with three points apiece. Aside from Nathan Todd's eventual game winner on a power-play tip in the first period, Anas’ two goals were perhaps the most important of the game. His penalty shot, which resulted from a Charlotte skater covering a loose puck in the crease, gave his team a 2-0 lead and some momentum heading into the third period. In the first minute of that final frame, the Checkers gave him time to pick a corner from a sharp angle to go up 3-0.

After Springfield’s Mackenzie MacEachern scored on a wraparound to make it 4-0 just 3:06 into the third period, the Checkers pulled starter Joey Daccord (19 saves) from the contest. Christopher Gibson allowed a Klim Kostin goal on his first shot faced just 28 seconds later, and another on a blast from Tyler Tucker much later in the frame.

Charlotte out-shot the Thunderbirds 35-28 for the game. Special teams were the difference in the early going before Springfield pulled away in the third, with the Thunderbirds scoring their first two goals on the man advantage and Charlotte finishing 0-for-4.

The series continues with Game 2 in Springfield this coming Wednesday. Following that game, the remainder of the series will be played in Charlotte beginning with Game 3 on Saturday, May 28.

Kinnear on what he would like to see next game
I’d like to play how we know we can play. I didn’t think we played as good as we can play and I didn’t think that individually we were on top of our game. Sometimes that’s a reflection of what the other team did, and again I thought they played a really good hockey game. Obviously we’ve got to look at the video, move forward and get better. Nothing changes for us. For us, it’s a loss. We know it’s a good hockey team over there and they’re up 1-0.

Kinnear on the team’s ability to rebound from losses this season
You look at the leadership group. They know we got beat tonight. The score doesn’t matter. We’re down 1-0 and we have to make adjustments and continue to get better.

The Checkers have yet to win in Springfield this season (0-3-1 regular season) … The last time the Checkers lost a playoff game by six or more goals was an 8-1 loss to Oklahoma City on May 3, 2013 … This was the second penalty shot in Checkers playoff history. The other, which came in a 2019 Eastern Conference Final game against Toronto, also resulted in a goal against. Those are also the AHL’s two most recent playoff penalty shots … This marked the fourth time the Checkers have been shut out in a playoff game. The first three occurred in 2011 … The Checkers were shut out twice in the regular season … This was Gibson’s first game action since the regular-season finale on April 23.