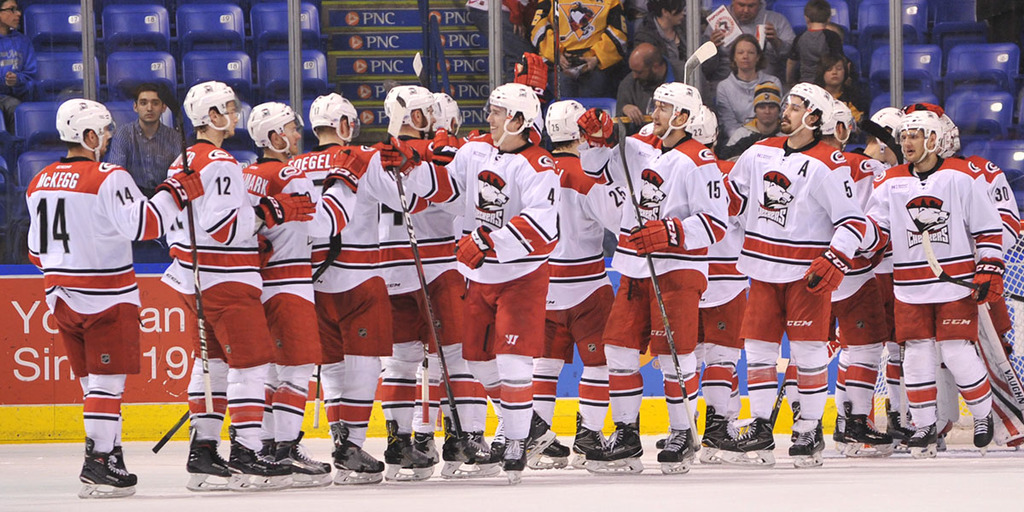 Hitting the road didn’t seem to faze Charlotte as the Checkers flew by the Penguins 7-3 to secure a sweep of Wilkes-Barre/Scranton and advance to the second round for the first time since 2011.

As they did in each of the first two games, the Checkers ceded an early lead to the Pens, as the home squad scored twice in the first eight minutes or play to jump ahead. The visitors were undeterred, however, as a Lucas Wallmark rocket was followed up just 21 seconds later by a smooth individual effort from Greg McKegg that evened the score through 20 minutes of play.


SCORE SHEET PHOTO GALLERY
The middle frame didn’t have the fireworks that the pervious one did, but the Checkers were able to break through late and snag the lead thanks to an Aleksi Saarela centering pass that careened off of a Penguins’ defender and in.

With their season on the line, the home squad came out firing in the third but it was the Checkers whose offense would continue rolling. Clark Bishop banged home a Warren Foegele-feed from behind the net to extend Charlotte’s advantage, then Andrew Miller followed up moments later with a seeing-eye snipe to blow the game open not even halfway into the third. The Pens would claw their way to one more tally later in the frame but it was too little, too late, as a pair of empty netters buried Wilkes-Barre/Scranton and secured the Checkers 7-3 win in the game and 3-0 win in the series.

Charlotte has won 10 games in a row. The team ended the regular season on a 10-game point streak (9-0-1) and has not lost in regulation since March 18 … Charlotte awaits the winner of the Lehigh Valley/Providence series that is currently tied 1-1. Dates and times for second-round playoff games will be announced upon the conclusion of that series … This is the first series sweep in Checkers history. Prior to tonight, they had never won the first two games of a series … The Checkers did not score the first goal in any game of this series. They trailed 2-0 in two of the three games … Charlotte won a playoff series for the first time since its inaugural 2010-11 campaign. Each of its last two series wins were against Wilkes-Barre/Scranton (2011 second round, 2018 first round) … The Checkers set a new team record for most goals in a playoff game, eclipsing the old mark of six set on May 1, 2013, against Oklahoma City … Former Penguin Greg McKegg led the Checkers with five points (1g, 4a) in three games. He now has 28 points (10g, 18a) in 22 games with the team. He is also tied for the team lead with a plus-6 rating … Forward Marcus Kruger and defenseman Jake Chelios missed the game due to injury … Forwards Mike Ferrantino, Nick Schilkey, Zack Stortini and Sergey Tolchinsky, and defensemen Matt Finn and Dennis Robertson were healthy extras.

The Checkers have now advanced to the Atlantic Division Finals. They will play the winner of Lehigh Valley-Providence, a series that is tied at one and has Games 3,4 and – if necessary – 5 scheduled for Friday, Saturday and Monday.