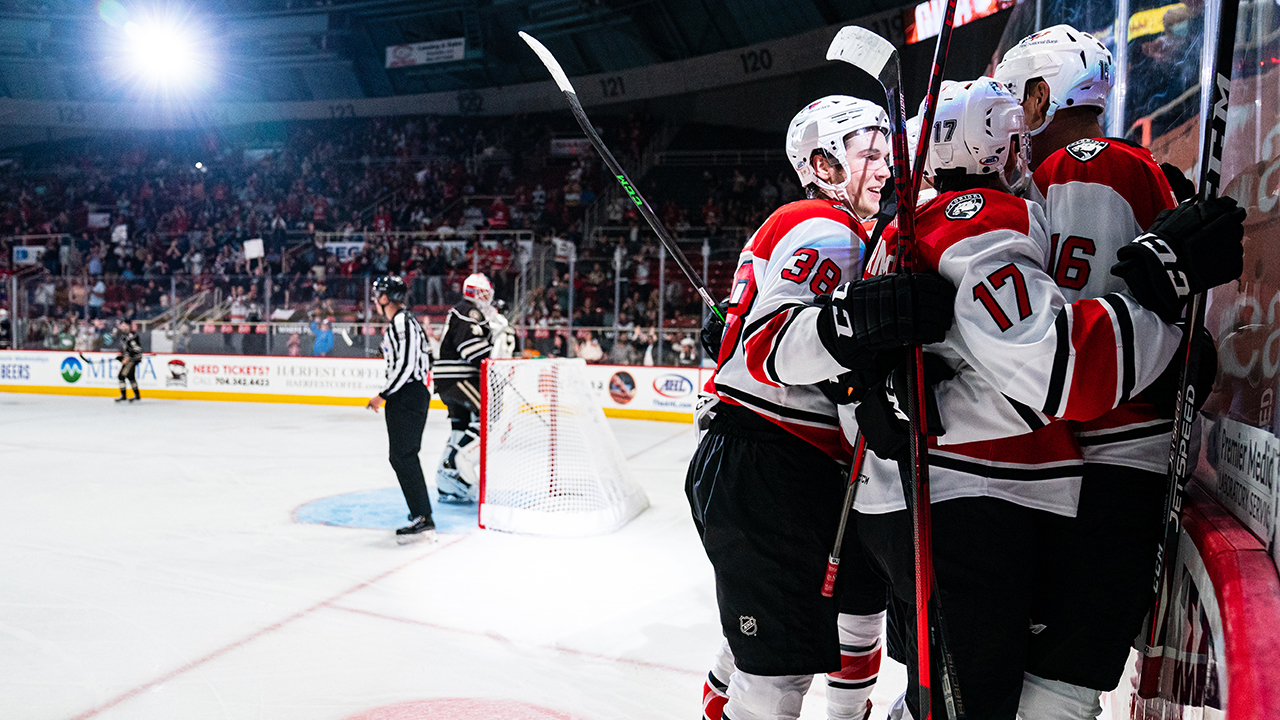 The Checkers took the Bojangles Coliseum ice for the first time in nearly 600 days on Friday and put on a show for the raucous crowd, rallying to pull off a 5-3 win over the Hershey Bears.

Max McCormick and Alex True carried the torch offensively, combining on three of Charlotte’s goals to collect three points a piece. Their final connection came with under five minutes to play, when True fed a wide open McCormick for a tap-in that broke the deadlock and lifted Charlotte to their second straight victory.

As was the case in their first matchup last week, there was a parade to the penalty box between Charlotte and Hershey, with the two sides combining for 10 power plays on the night. The Bears converted twice on their six attempts, with both power-play goals coming over a five minute stretch in the middle frame that gave the visitors a 3-2 advantage.

The Checkers bounced back, however, with Aleksi Heponiemi bringing things even less than two minutes later to set the stage for McCormick’s winner.

Christopher Gibson got revenge after dropping his first start against Hershey, facing a 36-shot barrage and turning in a strong 33-save performance, including shutting down a nine-shot push from the Bears in the final frame.

SCORE SHEET PHOTO GALLERY
Head Coach Geordie Kinnear on his team’s effort
We’re still trying to find it as a group. Our goalie was really good tonight, and he allowed us to come away with the two points. We know we have a lot of work to do.

Kinnear on the line of Alex True, Max McCormick and Logan Hutsko
You have True in the middle who has great hockey sense, and then you have Hutsko that has great pace and jump and off. Offensively he’s dynamic. McCormick just plays the game the right way. You come back to the bench and they all talk and are on the same page. They’ve obviously been our best line.

Kinnear on the play of Christopher Gibson
He did a lot of digging. He had a lot of tough shots and a lot of traffic. Give Hershey a lot of credit because they put a lot of pucks to the net which is never easy for a goaltender. He’s the reason we got the two points tonight.

Kinnear on playing in front of the home fans
It was a great crowd. They love to see goals and good hockey plays. We want to play fast, and this building with the fans will allow us to do that because I think there’s a lot of momentum they can create for our group.

The Checkers played their first home game in 590 days. Dating back to March of 2020, they have now won three straight at home … After dropping their season opener to Hershey on the road last week, the Checkers have won two straight to improve to 2-1-0 … At the conclusion of the game, True led the league in scoring with six points. McCormick (five) was tied for second … After posting +4 ratings tonight, True and McCormick were also tied with Checkers defenseman Lucas Carlsson for the league’s best plus/minus rating (+7) … Hutsko is tied for third among AHL rookies with four points, all assists … Hutsko, McCormick and True are the only Checkers to record at least one point in all three games … With a late empty-netter, defenseman Matt Kiersted scored in his AHL debut … Forward Karch Bachman missed the game due to injury … Forwards Henry Bowlby and Luke Henman and defenseman Frank Hora were healthy extras.