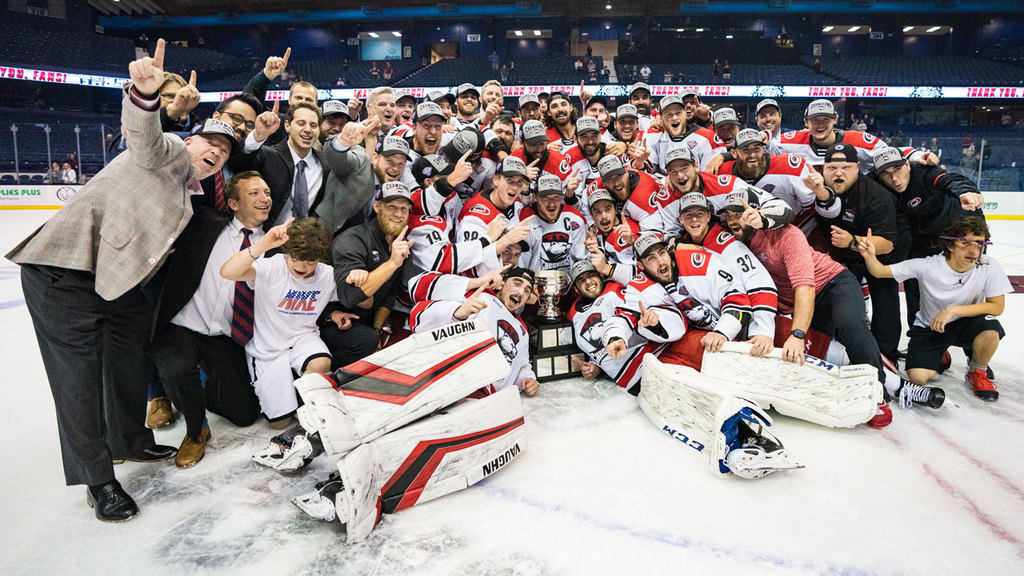 The Checkers capped off their record-breaking season Saturday night, beating the Wolves in Game 5 to capture the franchise’s first-ever Calder Cup and deliver the city of Charlotte a championship.

The league’s leading playoff scorer Andrew Poturalski wasted no time getting the Checkers on the board, collecting a slick cross-ice feed from Aleksi Sarela and lighting the lamp just 91 seconds after the opening puck drop.

Charlotte’s top line continued to heat up in the middle frame as Morgan Geekie added another for his squad, catching a Chicago turnover in the slot and wiring a quick shot under Oscar Dansk. The Wolves got a spark of life in the waning seconds of the period as they finally broke through offensively, but the Checkers reestablished their two-goal advantage early on in the third.

Geekie came up big with a faceoff win in the offensive zone and Trevor Carrick ripped the ensuing loose puck into the back of the net to make it 3-1.

The Wolves would cut back into the lead twice late in the third period – using an extra attacker both times – to increase the drama, but the Checkers would punch back each time as Poturalski and Zach Nastasiuk each buried a puck into the empty net to seal the team’s fourth straight win and end the series in five games.

As he has all season, the AHL’s Most Oustanding Goalie Alex Nedeljkovic stepped up to the challenge in the Cup-clinching game, pulling off several stellar denials en route to a 26-save performance. Poturalski, who ended the postseason with league-best 23 points (12g, 11a) in 18 games, was named the AHL’s Playoff MVP.

CELEBRATION INFO SCORE SHEET PHOTO GALLERY
Coach Mike Vellucci on the win
The guys wanted it really bad. They didn’t want to play any more games and have that week off. I was a little nervous that we wanted it too much, but we came out and played the right way and they played great too.

Vellucci on what the team will take away from this championship
Friendship. Friends for life. That’s what I told them already. You’re going to have friends for life. Championship guys stick together. Hockey wise, it’s a grind. We’re exhausted. Nobody wanted to play any more games. It’s June whatever it is. I don’t know if it’s a weekend or a weekday. I’m tired, the players are tired. They put everything into it. One of the things I think is the coolest and worried me a little bit is that we were the front dogs all year long. We were the front runners all year long That’s not easy to to, and I think a big testament was that we saw Tampa Bay go down in the first round (in the NHL) and we didn’t want to be having that problem.

Vellucci on the team’s mentality this season
Win. We wanted to win. We accept no losing. We want to get better as players obviously but we want to win. There’s the skill part of it, but developing winners is something that organizationally we needed. Medocrity is no longer tolerated in our organization.

Vellucci on his team
To be honest with you, I love every one of these guys. It’s easy to say that, it really is and everybody says it, but I mean it. It was very emotional. There’s so many guys that have gotten better. It was very special.

Vellucci on Andrew Poturalski
Every period he’s got both feet in a bucket with a broken foot. A special kid. An unsung hero and I don’t think he gets the accolades that he deserves. I can’t say enough about him. He’s a special kid and we have a great relationship off the ice. I’m very happy for him – he deserves it.

Alex Nedeljkovic on winning three in a row in Chicago
We had no intention of going back home and going to practice on Monday or Tuesday, whatever it would have been. We took it game by game, and we couldn’t win tonight without that first game on Wednesday. Every game was like our last.

Nedeljkovic on how he feels after the grind of a long season
I feel fantastic. Every day fantastic just to come to the rink and play a game that you grow up just loving and enjoying when it’s just a game but now it’s your career. Every day it’s just fun. I don’t work a day in my life right now.

Andrew Poturalski on winning a championship
It’s just unbelievable. Being here for three years and building this culture and having fun, we just expect to win and we went out and did it. I couldn’t be more proud of the guys in the room.

Poturalski on winning
We just kept finding a way to win. When new guys come in and they see that and see that we do whatever it takes to win, it’s pretty contagious. Everyone just buys in. We love each other in that room and it’s fun.

Poturalski on playing through injury for most of the playoffs
I feel unbelievable right now but it’s definitely been a grind. Everyone has bumps and bruises and I’m no different. You’ve just got to battle through and the guys next to you and that’s what playoff hockey is all about.

Poturalski on the championship
To get the first championship in Checkers history and do it for (team owner) Michael Kahn and the city of Charlotte and all the guys in the room, we truly deserved it. We worked our asses off for that all year. To get that win is definitely something we’ll all remember for the rest of our lives.

This is the first championship in the Checkers’ nine AHL seasons. The team won six previous championships in various other leagues, including Eastern Hockey League titles in 1957, 1971 and 1972, Southern Hockey League championships in 1975 and 1976 and an ECHL title in 1996 … The Checkers finished the season 49-0-0 when leading after two periods … Poturalski finished with 23 points (12g, 11a) in 18 games. He was held off the score sheet just three times … Josiah Didier had three points, all assists, in five Calder Cup Finals games. He had just one total point in the rest of the playoffs (14 games) … The Checkers finished the playoffs with four consecutive wins. Their only longer streak was a six-game run from April 24-May 8 that included the second-round sweep of Hershey … Defenseman Dan Renouf missed the game due to injury … Forwards Scott Davison, Steven Lorentz, Jacob Pritchard and Zack Stortini, defensemen Dennis Robertson and Bobby Sanguinetti and goaltender Jeremy Helvig were healthy extras.

The team will hold a public championship celebration Monday, June 10, at Bojangles' Coliseum. The event starts at 7 with doors opening to the general public at 6:30 p.m. More info here.