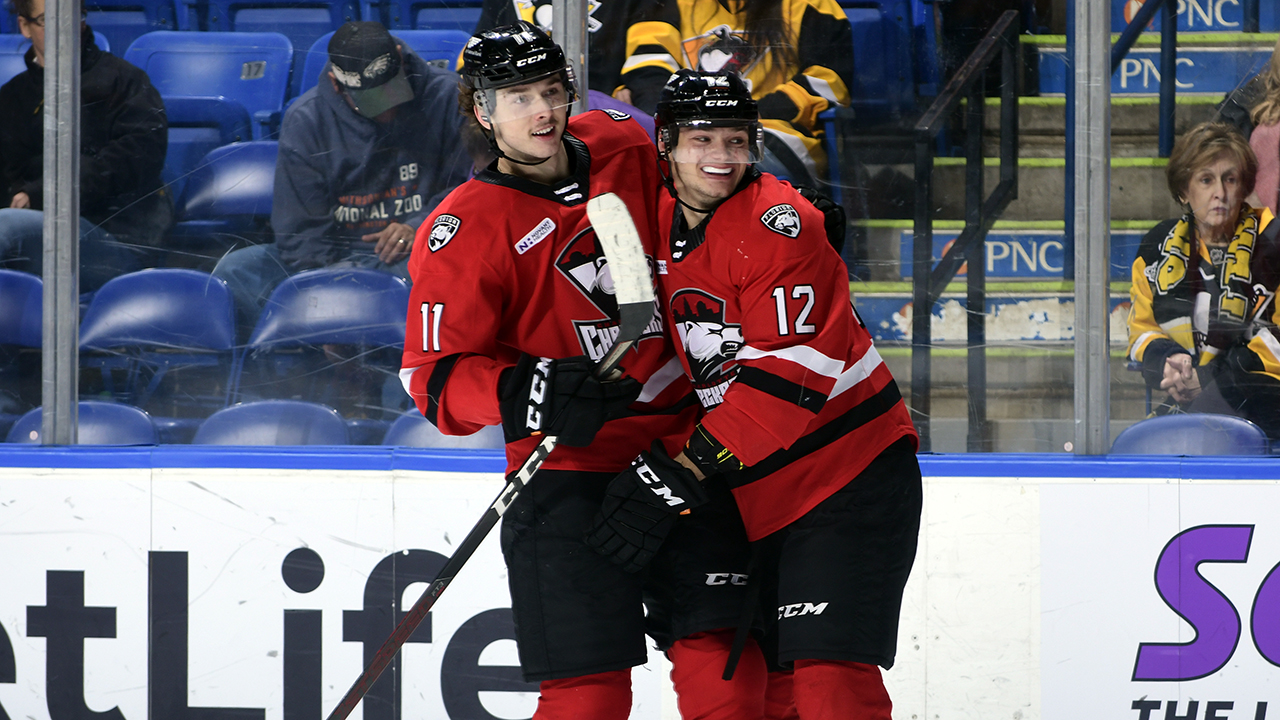 Rookie forward Cole Schwindt broke out with a natural hat trick and Christopher Gibson earned the team’s first shutout of the season to lead the Checkers to a 4-0 victory in Wilkes-Barre/Scranton on Saturday.

Schwindt scored once in the first period and twice in the second for the Checkers, who avenged a heartbreaking 2-1 defeat against the Penguins one night earlier. In goal, Gibson stopped all 30 shots he faced to earn the 12th shutout of his AHL career and also contributed on the offensive end, helping create two of Schwindt’s goals with long passes up ice.

Matt Kiersted iced the game with an empty-net goal for the Checkers, who improved to 5-5-1 on the season.

Schwindt, who did not record a point in his first five games of the season, has scored eight points (6g, 2a) in his last six outings and now has sole possession of the team lead in goals.

The first-year forward started the onslaught in the first period with his second shorthanded goal of the year, one that developed when Gibson sent a pass all the way down the ice to spring Schwindt and Carsen Twarynski on a 2-on-0 break. After Twarynski’s initial shot was denied, Schwindt got two attempts at the rebound, using his reach to finally send it home.

He added to his total with two more goals in the second period, once picking the far corner on a rush down the left wing side and next finishing a sharp passing play with Henry Bowlby and Twarynski that was once again started by a long pass from Gibson.

Schwindt’s hat trick was the first by a Checker since Morgan Geekie on March 1, 2020. It was also the fourth by a rookie in team history, as Aleksi Saarela, Warren Foegele and Janne Kuokkanen all accomplished the feat during the 2017-18 season.

In addition to his offensive prowess, Gibson was instrumental as the Checkers killed all seven Wilkes-Barre/Scranton power plays on the evening. Over the two-game set, the Checkers did not allow a power-play goal on 10 total opportunities.

This was Schwindt’s first multi-goal game as a pro. His two shorthanded goals are tied for the league lead … Gibson’s last AHL shutout was with Bridgeport on March 11, 2019 … The Checkers are 2-1-0 against the Penguins this season. They play twice more this month, in Charlotte on Nov. 23 and 24 … Defenseman Olli Juolevi made his Checkers debut after joining the team on a conditioning stint earlier in the day … Checkers scratches included forwards Zac Dalpe and Ryan Lohin, defenseman John Ludvig and goaltender Joey Daccord.

The Checkers’ three-in-three weekend concludes with a 5 p.m. game in Hershey tomorrow.