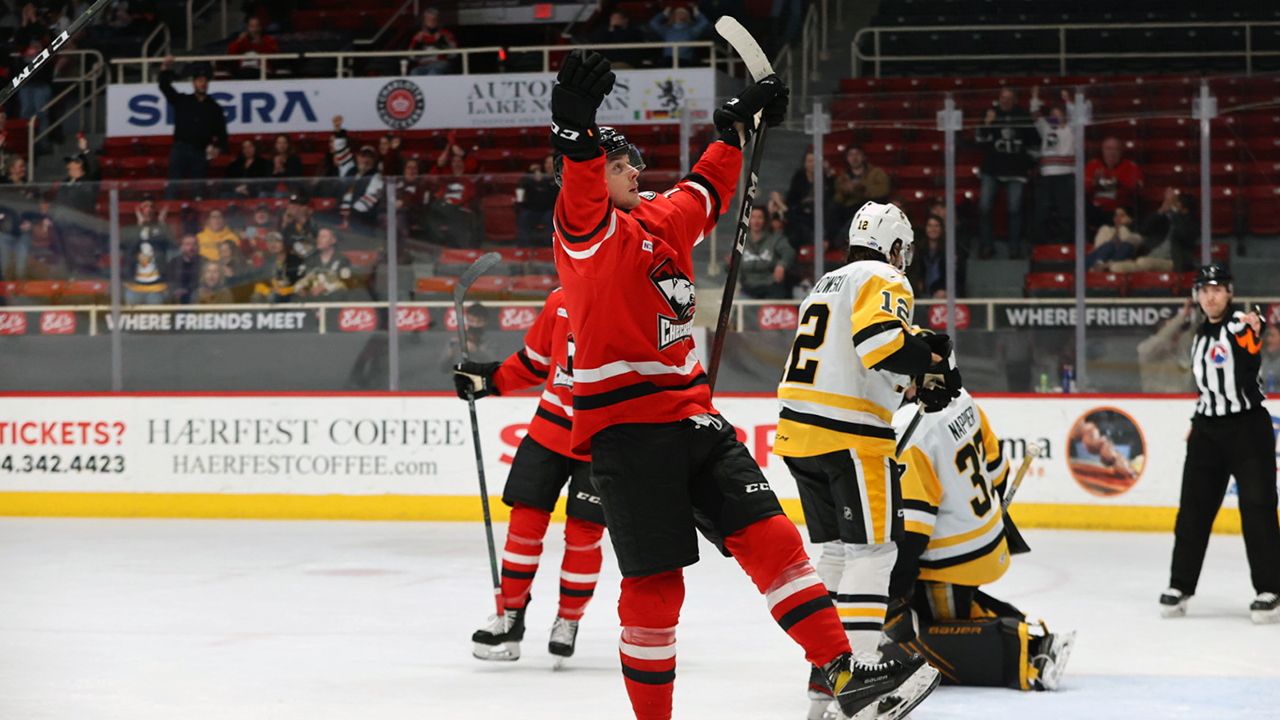 While it was a far cry from Saturday’s low-scoring affair, the Checkers came away with another victory on Tuesday by outdueling the Penguins 5-4.

The back-and-forth contest was brought back to a draw inside the final three minutes of play by Wilkes-Barre/Scranton, but that deadlock was short-lived. Cole Schwindt pounced on a defensive zone turnover by the Penguins and ripped a quick wrister into the back of the net with 91 ticks remaining on the clock, sealing the two points for the home side.

The Checkers found themselves in a quick hole following puck drop, as the Pens struck twice before the eight-minute mark of regulation. Scott Wilson got Charlotte on the board before the first intermission though, roofing a beautiful backhander from a staggeringly low angle to give the Checkers some life.

That momentum would keep rolling for Charlotte, as it racked up three straight tallies from there to claim a two-goal lead - one that the visiting Penguins would steal back, however, setting the stage for Schwindt’s heroics.

Spencer Knight turned aside 30 pucks on the night, including surviving a 17-shot barrage by the Pens in the third period alone, and earned his fourth straight victory between the pipes.

SCORE SHEET PHOTO GALLERY
Coach Geordie Kinnear on the game
We didn’t start well so we had to mix things up a little bit and then we got going. It was kind of a sloppy, back-and-forth game where probably at the end of the night neither coach is really happy with the mistakes that are being made. Honestly, you’ve got to win hockey games like that. It’s a long season, you’ve got to find ways to win games and we found a way to win tonight. We all know we’ve got to do better.

Kinnear on his team responding quickly after the Penguins tied the game late
There’s not really a message. Win the next shift and put that one behind us. We went out, Schwindt scored a big goal on a turnover and we executed. We just keep playing the same way.

Kinnear on Cole Schwindt
He's a 200-foot player. That’s why he’s dangerous. I’ve been thrilled with his progress and we need him to keep getting better. That’s a big goal, but it’s his 200-foot production that makes him a good hockey player.

Cole Schwindt on his goal
I saw a good forecheck from the captain and Max (McCormick), and the puck kind of popped out of the slot right in the middle there. I kind of closed my eyes and shot the puck, and luckily it went in.

Schwindt on responding to the Penguins’ late goal
It kind of starts with the coach, and we’re a tight-knit group that can deal with that adversity. It’s a good thing to see that when they tied it up late we dealt with that adversity, got one back and stole both points.

Schwindt on the team’s offensive success tonight
We got a nice practice in yesterday and are just getting flowing again. We played a bunch of games here, and you’re going to have those nights where you have to grit it out with maybe one or two goals, but it’s nice to get the confidence and get five goals on the board.

The Checkers scored five or more goals in four of their last five wins. They scored at least five goals 11 times this season, and their 149 total goals rank fourth in the league … Wilson has seven goals in his last seven games and 11 points (7g, 4a) in his last 11 games. He is tied for eighth in the league with 18 goals on the season … Lind has a four-game point streak (3g, 1a) and 13 points in his last 13 games … The Checkers are 4-1-1 in the season series with Wikes-Barre/Scranton … Grigori Denisenko, Max Gildon, John Ludvig, Gustaf Olofsson and Christopher Gibson missed the game due to injury … Jacob Friend, Nolan Kneen, Ryan Lohin and Justin Nachbaur were healthy extras.