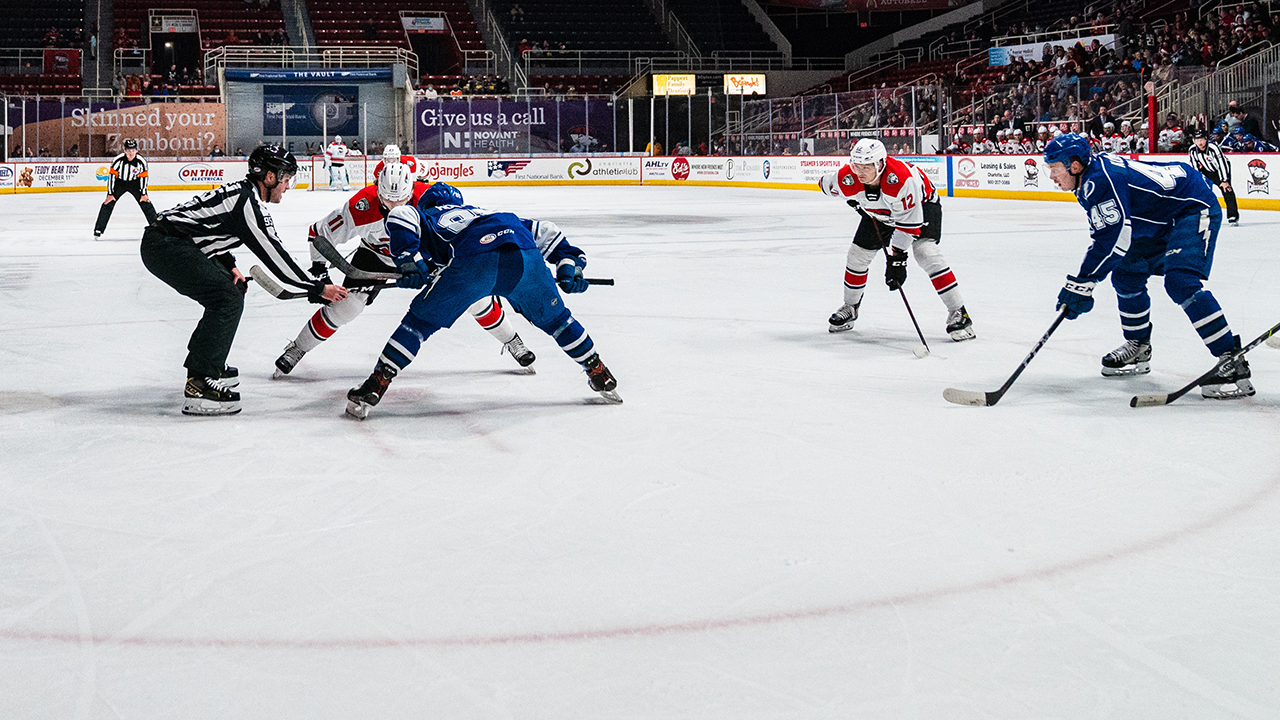 Friday’s meeting with Syracuse saw the Checkers once again make a late surge, but it wasn’t quite enough to close the deal as they fell to the Crunch 5-3.

There were fireworks right off the bat as Max McCormick and Alex Barre-Boulet got tangled up just before the opening faceoff. The Crunch would strike on the ensuing four-on-four play and their offense was up and running from there. The visitors would rack up three of the next four tallies to build up a substantial 4-1 lead through 40 minutes of play.

The Checkers ratcheted up the pressure in the final frame - outshooting the Crunch 14-6 - and finally broke through via a wild bounce off the stick of Kole Lind on a power play for his second goal of the game midway through the third.

Grigori Denisenko would pull the home side within one courtesy of a rocket through traffic with under five to play, but the Checkers’ final push came up empty. The Crunch would launch one more into the empty net in the waning moments to put a stop to Charlotte’s rally and end the game at 5-3.

SCORE SHEET PHOTO GALLERY
Head Coach Geordie Kinnear on falling behind early
Obviously Syracuse didn’t like their previous game (an 8-3 loss to Cleveland on Wednesday), and I thought they came out with a little more determination than us. We knew what happened the game before and we know what their coach expects from their group, so we knew, and then we were down 2-0. I thought we were OK but OK is never going to win. I thought we got going there a little bit, but you’ve got to play at a high level all the time.

Kinnear on getting to within one goal in the third period
We started doing a little bit extra playing and had five guys in sync. Before it was like three guys working and two guys kind of watching. This game is played with a lot of trust, and when you have five guys working together and on the same page, it’s nice to see as you saw in the third period. We need to do it when the game is 0-0 and not wait until we’re down 4-1.

Kinnear on gaining confidence as the game went on
They’re buying in. This is a younger group up front and it’s harder to score in this league than the league they were in previous. It’s important that they learn the lesson and learn it quickly. We had more (chances) at the end to score that we didn’t capitalize on. Again, we have to play that way when it’s 0-0 and not 4-1.

Kinnear on taking momentum from the third period into tomorrow’s rematch
That’s how we want to play all the time. It’s not momentum. We lost the hockey game. We need to come out and play to our identity and good things will happen at the end. If you don’t focus on your shift and what you’re supposed to do, good things aren’t going to happen. If you do and you work hard and you’re ultra-competitive, good things are going to happen.

This was the first meeting of the season between the two teams … Seven players in the Checkers’ lineup tonight played for Syracuse in 2020-21 because the Checkers opted out of the season … Lind was playing in his first AHL game since Nov. 28, having spent the interim with the NHL’s Seattle Kraken. This was his second two-goal game of the season and fifth of his AHL career … Denisenko scored for the second straight game, marking his first goal streak of the season … Zac Dalpe had a game-high seven shots on goal, his highest total of the season … Defenseman John Ludvig and goaltender Chris Gibson missed the game due to injury … Forward Ryan Lohin was a healthy extra.