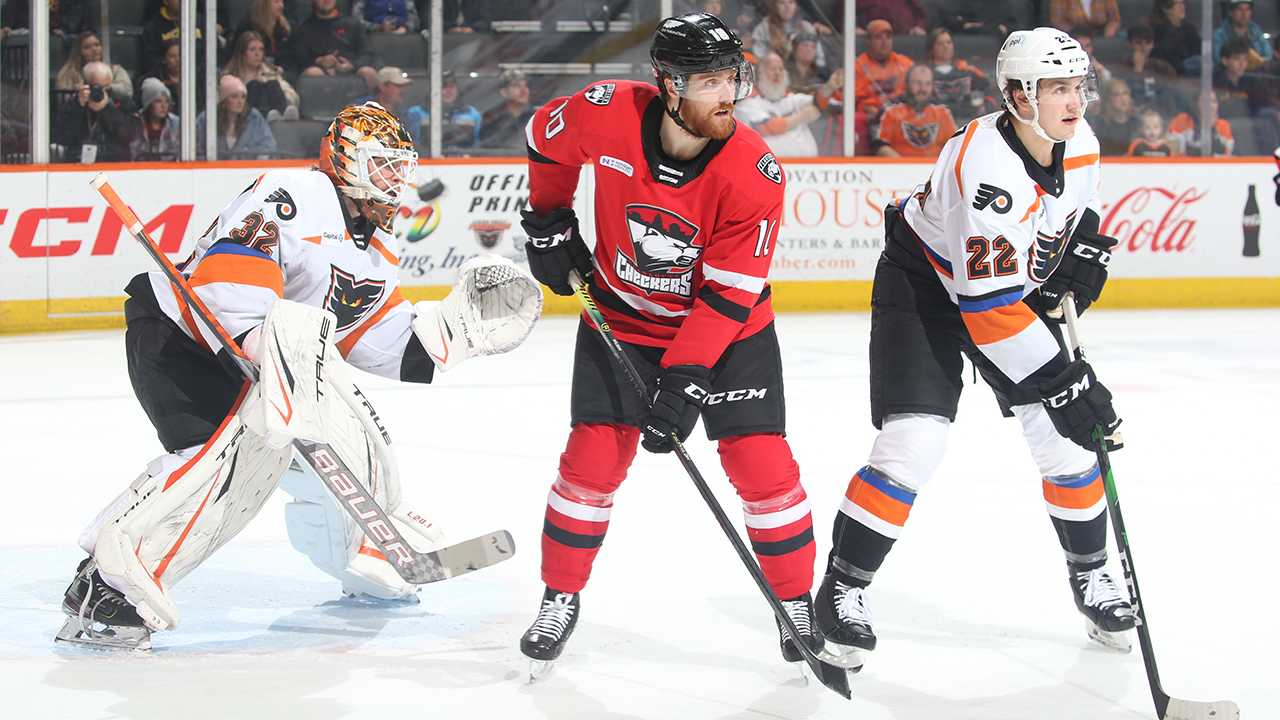 Things got a little dicey for the Checkers in their first visit to Lehigh Valley this season, but a timely power-play strike from Connor Carrick in the final two minutes of play clinched a big, streak-extending victory for Charlotte.

After seeing their three-goal lead disintegrate over the course of the third period, the Checkers took advantage of a power-play opportunity in the waning minutes of play to swing the momentum back to their side. With the power-play unit working the puck around the zone, Zac Dalpe was able to swing a pass over to Connor Carrick on the left faceoff dot, where he wired a one-timer into the net to push Charlotte back ahead by one with just under two minutes remaining - a lead the visitors would hold on to for a crucial two points.

The pass from Dalpe ?
The shot from Carrick ? pic.twitter.com/0gme3HIXV2

Special teams was once again a major factor for Charlotte. Following a scoreless first period, the Checkers turned a pair of odd-man rushes into back-to-back shorthanded goals over the first half of the middle frame - one off the stick of Scott Wilson and the other a rare 5-on-3 conversion by Max McCormick. Not to be outdone, the Charlotte power-play unit came through on their fourth man advantage of the night to nab the game-winner late in regulation.
SCORE SHEET PHOTO GALLERY


Christopher Gibson earned his team the victory with 29 saves between the pipes, running his shutout streak to five consecutive periods until a third-period push from the Phantoms that saw the home side storm back to even the score at 3-3 with under five minutes to play. The veteran netminder locked things up down the final stretch, however, smothering Lehigh Valley’s final push.

The Checkers have now won three straight games for the first time this season … Seven of Charlotte’s last nine goals have come on either the power play or penalty kill … Tonight was the first time this season that the Checkers have scored multiple shorthanded goals … The Checkers are now tied for the league lead in shorthanded goals … Charlotte has scored on five of its last 11 man advantages … The Checkers are perfect on the PK over the last four games and have successfully killed each of their last 18 times shorthanded … Scott Wilson has recorded a point in three straight games and scored in each of the last two … Tonight featured the fourth game-winning goal of Connor Carrick’s AHL career … Max McCormick scored for the second straight game, while Alex True picked up an assist in the second straight game … Logan Hutsko picked up his second two-point game of the season to lead all Charlotte skaters … Cale Fleury recorded an assist for the second straight game … Christopher Gibson has now recorded consecutive wins for the first time this season … Gustav Olofsson was assessed a match penalty for slew-footing in the second period, while Connor Carrick and Kole Lind picked up game misconducts after the final whistle … Ryan Lohin, Luke Henman, Riley Sheahan and John Ludvig all served as healthy extras

The road trip rolls on for the Checkers, as they travel to Utica on Friday to take on a Comets team looking to set an AHL record for the most consecutive wins to start a season.