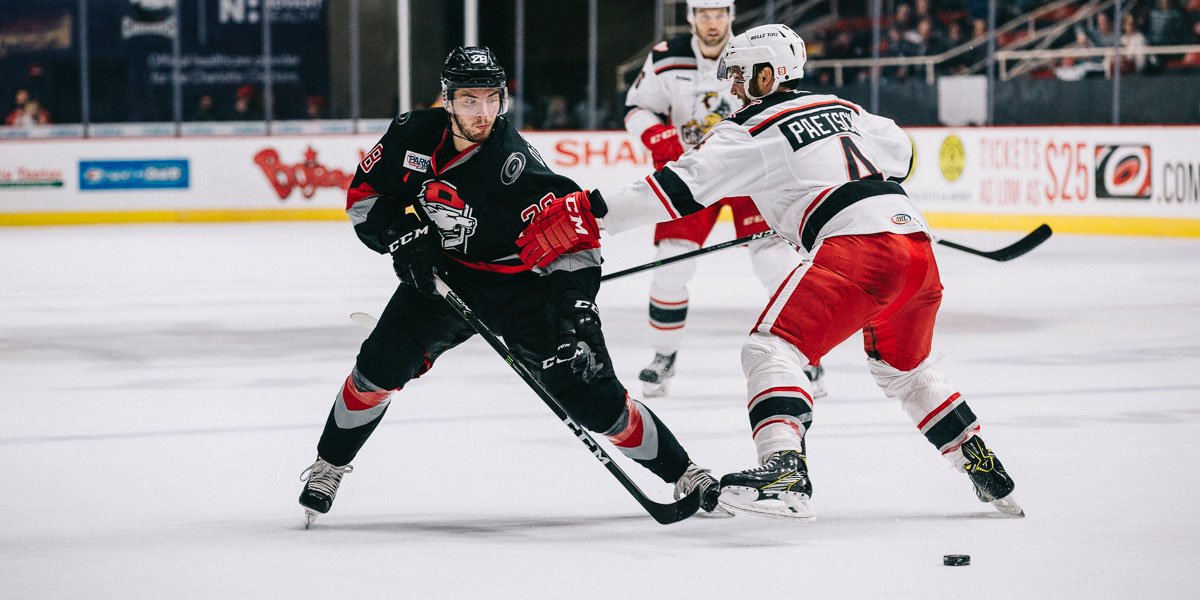 The Checkers' winning ways at home came to a screeching halt Saturday night thanks to a 6-1 thumping handed down by the Grand Rapids Griffins.

The Griffins set the tone early, lighting the lamp in the first two minutes, and kept their foot on the gas by pumping in two more to build up a 3-0 lead just 13 minutes into the game.

The Checkers were able to cut into that advantage nearly immediately, as Valentin Zykov collected a feed from Sergey Tolchinsky in the slot and sniped a shot to the top right corner. That goal triggered the annual Teddy Bear Toss to benefit Novant Health Hemby Children’s Hospital, but it would prove to be the only tally the home team would be able to muster up.

Grand Rapids would tack on one more with a shorthanded strike before the first frame ended, then one in each of the second and third period to roll their way to a lopsided 6-1 victory over Charlotte. Score SheetPhoto Gallery
“They played the game at a much higher pace than we were able to do tonight,” said head coach Ulf Samuelsson. “That was the biggest thing.”

“We got out-battled,” said team captain Patrick Brown. “They won more 50/50 battles, more faceoffs, more battles in the corners and in front of the net. They ended up getting more chances out of that and winning the game.”

After emerging for a few games, the Checkers reverted back to their offensively starved ways, struggling to put any real pressure on the Griffins – something they’ll be looking to rectify before the teams meet again at 1 p.m. on Sunday.

“Today we couldn’t find someone that could get the puck in the zone,” said Samuelsson. “That was the biggest key, so we’re going to have to take a look at that and make some adjustments. With a short turnaround we don’t have time to practice, so we’ll have to show some video to try to establish some more zone time.”

Making his second start in three games for Charlotte was Daniel Altshuller, but the flurry of goals led to an early exit for the netminder, who surrendered three goals on nine shots in the first 13 minutes of play.

Despite the rough stat line, Samuelsson was quick to deflect some of the blame from his young goalie.

“I don’t think Altshuller was terrible,” he said. “He probably wants the first goal back, but (by making a change) I sort of was looking more to spark the team. We’re not hanging him out for the loss at all. This was a collective effort.”

The Checkers didn’t do themselves any favors by falling behind so quickly. In a 4-1 hole after 20 minutes of play put a lot of pressure on their offense to deliver a lot of goals to catch back up.

“It’s hard,” said Samuelsson of playing form that far behind. “It’s one of those things where you need a fortunate break or some big plays to get some sort of momentum going your way. Unfortunately our hole was a little too big.”

Also not helping was the fact that the team was without Andrew Miller, injured during Wednesday’s win, as his absence disrupted a top line with Andrew Poturalski and Phil Di Giuseppe that had been catching fire as of late.

“Anytime you lose a top six player he’s hard to replace,” said Samuelsson. “He’s got a big role on our time at five on five and on power plays he’s extremely good at getting the puck in the opponent’s end. That was a big blow for us.”

“It makes it tough and it takes your momentum away early, but the good news is that we get to play these guys again in 12 hours and show them how we can really play,” said Brown.

With such a short turnaround, the team will have to quickly shift their focus to redeeming themselves.

“Grand Rapids is a really good hockey team, so we have to elevate our game to their level or it’s going to be another tough game,” said Samuelsson. “We have a lot of pride in our room and I think we will come out a lot hungrier tomorrow.”

The Checkers collected approximately 1,500 stuffed animals from fans during the Teddy Bear Toss promotion. Players will personally deliver them to Novant Health Hemby Children’s Hospital in January … Charlotte fell to 8-3-0 on home ice … The Checkers tied their season marks for most goals allowed in a game (six) and most goals allowed in a single period (four). Both of those were originally set in the team’s opening-night loss at Texas on Oct. 14 … The Checkers have allowed four goals in a period three times, all of which occurred in first periods … Aubry’s shorthanded goal was the first allowed by the Checkers all season. They entered the game as one of just three AHL teams yet to allow one … Forwards Andrew Miller, Kris Newbury and Brendan Woods and defenseman Trevor Carrick missed the game due to injury … Forward Mitchell Heard and defenseman Kevin Raine were healthy extras.