Grigori Denisenko Steps up to Give Checkers Shootout Win over Penguins 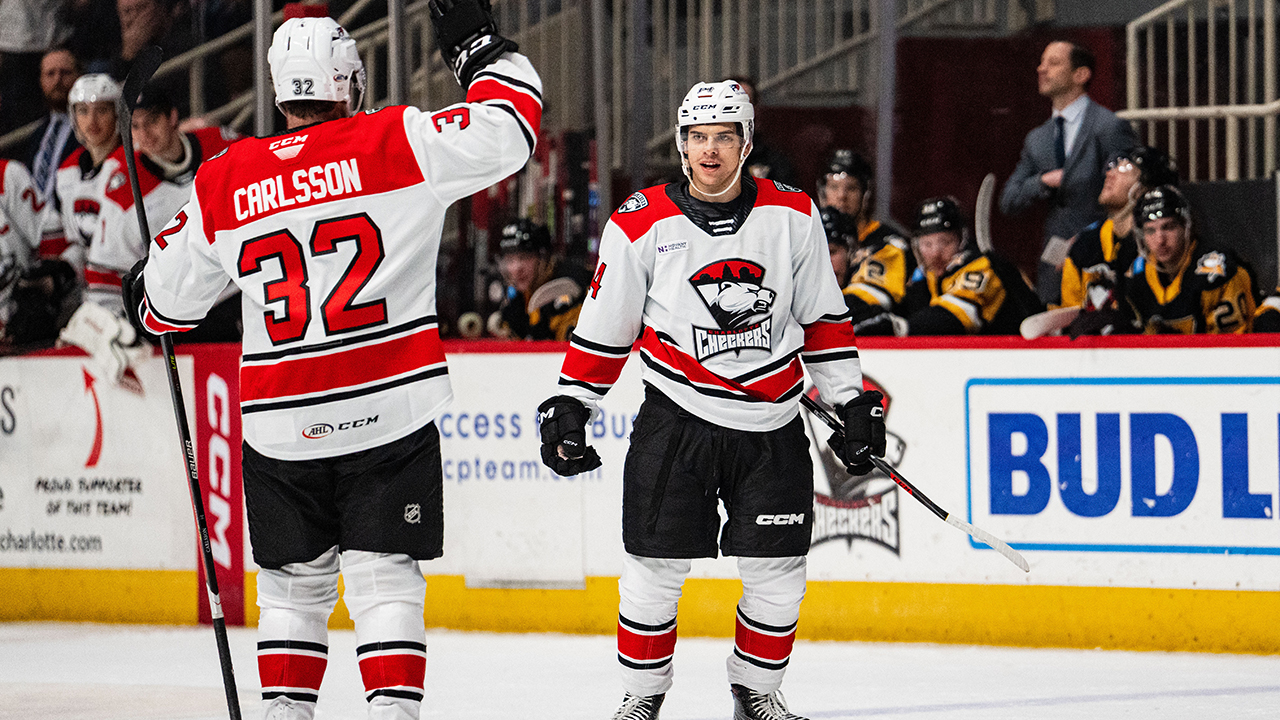 The Checkers brought their winning ways with them from the road, battling back to beat the Penguins 5-4 in a shootout and extend their winning streak to four games.

Despite Charlotte finding the back of the net first, things swung the visitors’ way for the first half of the contest as three straight Penguins’ goals put the Checkers in a 3-1 hole by the five-minute mark of the second. The Checkers rattled off their first rally of the night from there, though, as Patrick Giles knocked in a rebound off the rush and Aleksi Heponiemi followed up three minutes later with a seeing-eye snipe on the man advantage.

That deadlock didn’t last long, as the Penguins pushed themselves back ahead with a power-play goal of their own just 74 seconds into the final frame. The home team pushed back for much of the rest of the third, and with six minutes left in regulation the Checkers finally found the equalizer - as Grigori Denisenko wired a one-timer into the top corner on the power play to pull his team back even and send the contest to overtime.

The extra frame didn’t produce a winner, and neither side could convert on their shootout attempt until the bottom of the fourth round when Denisenko netted the walk-off winner and claimed a huge two points for Charlotte.

SCORE SHEET PHOTO GALLERY
Coach Geordie Kinnear on the game
It was just a battle band and forth. Both teams came off flights yesterday, they played Saturday and we played Saturday. It was an even game, and I think you saw that there were ebbs and flows to it. Both teams made a lot of mistakes and it came down to the shootout, which it should have.

Kinnear on fighting off fatigue from the road trip
We talk about it all year long. Some practices, you don’t feel like moving in practice but this is why you push through. We’re prepared for it. It’s not always easy but you have to wrap your mind around it. The guys did a good job of it today.

Kinnear on breaking through for the tying goal
Deni has worked extremely hard but hasn’t been rewarded, but he was rewarded tonight. You’ve just got to stick with it, take it one shift at a time and do the right things and the bounces will go your way. Obviously a really good goalie and a really good team with an experienced back end. We want to be better on Wednesday than we were tonight, but we’re happy to get the two points.

Kinnear on Denisenko’s big game
Deni and I have talked quite a bit. His work ethic and how he’s played have been really good. He’s had the puck a lot and just hasn’t found the score sheet. I always say that if you work hard, good things will happen. You don’t know when and you’ve just got to keep working hard. I’ve been proud of Deni for how hard he’s been working and he’s been rewarded tonight. We just want him to keep building that confidence. The only way to do that is to work.

Patrick Giles on the comeback win
I think it just shows our character. We had a long trip on the road and then we were down two and found a way to come back. That’s big and just speaks to the guys in the locker room about who we are and who we want to be this season.

Giles on staying competitive despite the busy schedule
The coach speaks a lot about being an everydayer, and that holds true especially on days like today coming back from that long road trip. I think we did that.

The Checkers’ fourth straight win ties their longest streak of the season set in their first four games of the campaign on Oct. 14-22 … This was the Checkers’ league-leading seventh overtime game this season. They are now 5-2 in overtime games, including a 3-1 mark in the shootout … Dalpe and Heponiemi each scored for the second consecutive game … Lucas Carlsson had two assists to extend his point streak to four games (2g, 3a). He has seven points in six AHL games this season and has been held off the score sheet just once … The teams went a combined 4-for-8 on the power play, with each team scoring twice … Checkers defenseman Michael Del Zotto fired a game-high seven shots on goal … Checkers scratches included forwards Riley Bezeau, Ethan Keppen and Serron Noel, defensemen Max Gildon, Calle Sjalin, Zach Uens and Johnny Ludvig, and goaltender J-F Berube.