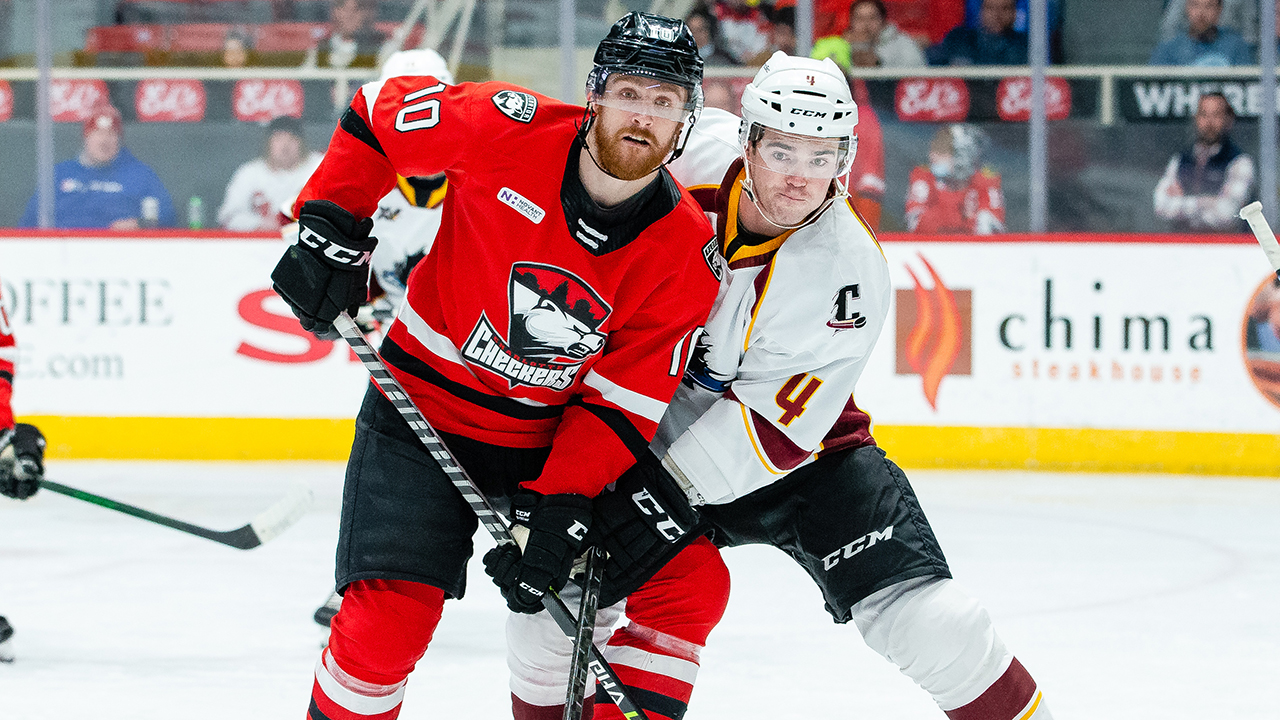 Charlotte’s rematch with Cleveland was a wild, high-scoring affair, but one that slipped past the Checkers in the end for a 6-5 overtime loss.

The Monsters were once again the first team to find the back of the net and start a back-and-forth offensive battle. The two sides entered the first intermission deadlocked at two, then progressed to a 3-3 tie after 40 minutes of play.

It was a pair of strikes early on in the third that pushed the home side firmly ahead, as Kole Lind extended his scoring streak to seven games with a power-play tally and Cole Schwindt followed it up with a strike just 17 seconds later.

The Monsters would find a spark down the stretch, however, netting a pair of goals over a two minute stretch to draw things back even and force overtime. The overtime featured up-and-down action and plenty of close calls on both sides, but with eight seconds on the clock Thomas Schemitsch snuck one across the goal and clinched two points for the visiting Monsters.

SCORE SHEET PHOTO GALLERY
Coach Geordie Kinnear on the game
I thought it was a Sunday 1 o’clock game with a lot of fatigue and a lot of mistakes, to be honest. A back and forth game, and they made a play at the end to win.

Kinnear on Cleveland
I thought they had a lot of purpose to their game yesterday and they might have felt like they deserved a little better on outcome. They came to work today, and I thought we made some plays in the third period. They got one, and then I thought we stopped skating and we stopped playing hockey. We just kind of watched a little bit. Credit to them because they tied it up and then we lost in overtime at the end.

Kinnear on the high-scoring game
A lot of goals tonight. It was a 6-5 hockey game. Too many goals, and we got the short end of the stick.

Kinnear on going 4-1-1 during this home stand
To be honest, I’m proud of these guys. Six games in nine nights against a rested team that came in here, and they deserve a lot of credit. I thought I got an honest effort from a lot of players, but we have to learn to dig in when we’re tired and keep the puck out of the net.

The Checkers have points in each of their last five games (4-0-1), marking their longest such streak of the season … Lind had three points to extend his point streak to seven games (4g, 5a). It is the longest streak of his career and the longest by a Checker this season … Connor Carrick had a season-best four points, all assists, to extend his point streak to three games (1g, 5a) … Dalpe and Wilson are tied for the team lead and for ninth in the AHL with 19 goals this season …. The Checkers have scored four or more goals in four straight games. This was the 12th time they have scored five or more. They now rank second in the AHL with 162 goals this season … Grigori Denisenko, Cale Fleury, Max Gildon, Aleksi Heponiemi, John Ludvig, Gustaf Olofsson and Christopher Gibson missed the game due to injury … Antoine Bibeau, Brandon Fortunato, Ryan Lohin and Blake Siebenaler were healthy extras.