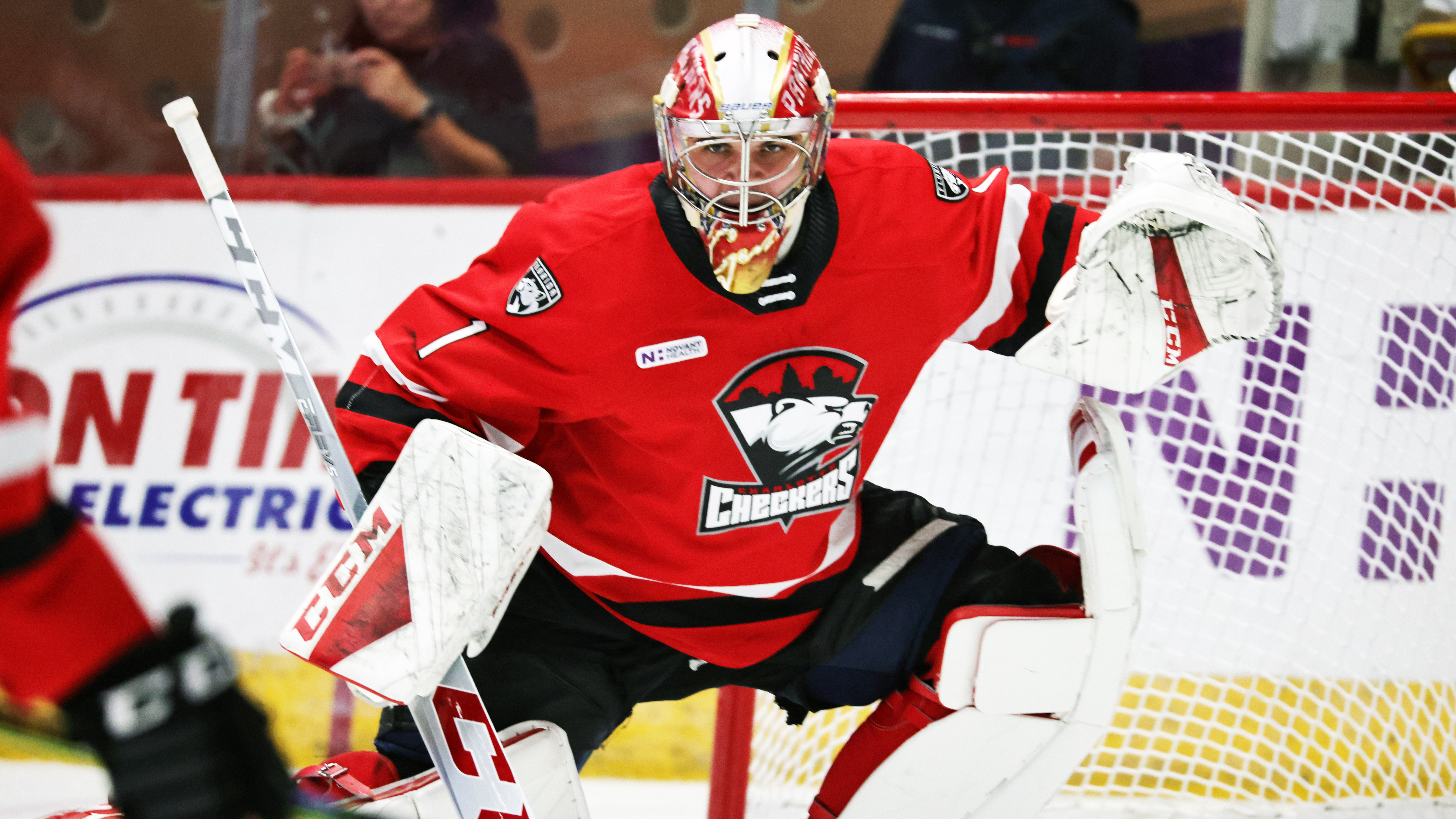 The Checkers capped off their opening weekend with another victory over Hartford, besting the Wolf Pack 3-1 in front of a packed house.

For over 40 minutes of play there was only one goal to speak of - a power-play strike late in the first courtesy of Connor Bunnaman as he pounded home a loose puck from out front.

The Checkers continued pushing and eventually added to their advantage in the third, with Riley Nash knocking home a power-play tally of his own early in the frame and Santtu Kinnunen depositing a long-range shot into the empty net late. The Wolf Pack would break through with just four seconds remaining on the clock, but the Checkers emerged victorious nonetheless with a 3-1 win to pull off the weekend sweep.

Playing in his first pro game, Mack Guzda put on a show between the pipes. The rookie netminder made 30 saves across the contest and held Hartford off the board for over 59 minutes of play.

SCORE SHEET PHOTO GALLERY
Coach Geordie Kinnear on the game
I thought, compared to the game last night, it was sloppy and there wasn’t a lot of energy, so guys had to dig in a little bit and the mental toughness part came in the third period. We stuck with it, we had a one-shift-at-a-time mindset and I thought the guys did a good job in the third period. It’s not where we want to be, but it’s to be expected and we want to keep building.

Kinnear on getting two power-play goals
They got pucks to the blue paint. There were bodies there. We talk about that all the time and it’s something we want to preach – blue paint goals. We scored two of them on the power play and that’s big.

Kinnear on Mack Guzda
He's great, right? I’m sure there were a lot of nerves on the way to tonight, but he settled into it and did a great job. We would have loved to get him the shutout, but there will plenty of those for him at some point.

Mack Guzda on the game
I was trying to take it one shot and one moment at a time and not really put that much thought into it, but obviously it’s pretty cool playing in your first pro game.

Guzda on how he felt throughout the game
I felt pretty sharp and the guys did a really good job of playing on defense and helping to make it easy on me in my first game.

Riley Nash on the team coming together
At times it looks like we haven’t been on the ice together for a long time and at times it looks pretty good. I think that’s kind of what you expect from the first weekend with getting down to the numbers and getting chemistry. You’re just trying to find that flow as quickly as possible.

Nash on the team getting better as the game went on
It's a tough league. There’s a lot of good players in this league. I think come playoff time you’ve got to be able to win those one-goal games and those games that are tied going into the third or you’re up one and have to hold on. We’re a long way from the end of the season and the playoffs, but it’s obviously a good test early on and shows that we can do it.

Nash on Guzda
He looked like a rookie to me. Just kidding, he was terrific. We gave up some pretty good opportunities, especially in the first two periods. He’s such a big body in there and he’s so athletic that he makes it look a lot easier than it is.

Nash on playing in Charlotte again 10 years later
It’s great. We were playing out at Time Warner last time I was here. I don’t even know if that’s what it’s called anymore, but this atmosphere is great and this rink is great. I love what they’ve built here. Mr. Kahn has done a great job, and the coaching staff with Geordie has done an awesome job with the team. You can see that the energy and the fans when you’re walking through the Red Line Club – it’s the first time for me doing that. It’s a lot of fun.

Nash (1g, 3a), Anton Levtchi (2g, 1a), Lucas Carlsson (3a), Aleksi Heponiemi (1g, 1a), Santtu Kinnunen (1g, 1a) and Chris Tierney (1g, 1a) each scored at least one point in the season’s first two games … The Checkers went 2-for-4 on the power play tonight and are now 3-for-10 on the season … Defenseman Michael Del Zotto made his Checkers debut … Forwards Riley Bezeau, Ethan Keppen and Serron Noel, and defensemen Max Gildon and Zach Uens were healthy extras. Goaltender Alex Lyon completed a two-game suspension that carried over from last season.