The Checkers tied a franchise record with their sixth consecutive victory as they beat the Iowa Wild for the second time in as many days, this time by a 4-1 score, on Friday.

Defenseman Matt Tennyson, who was serving as team captain for the first time following Derek Ryan’s recall to the NHL’s Carolina Hurricanes earlier in the day, scored a hat trick to lead his team to victory. Rookie Clark Bishop scored his first pro goal and Michael Leighton made 33 saves to improve to a perfect 6-0-0 on the season.

Prior to their current run, the Checkers had only won six in a row on one other occasion in January of 2013. They now sit at 7-3-0 on the season, which ties another franchise mark for most victories through the first 10 games of a season, also set during the 2012-13 campaign.

Charlotte’s win streak, which dates back to their Oct. 28 home opener at Bojangles’ Coliseum, is also the longest posted by any AHL team this season.

After a wild 5-4 game between these two teams that featured seven first-period goals one day earlier, it took considerably more time for either team to find offense in this contest. 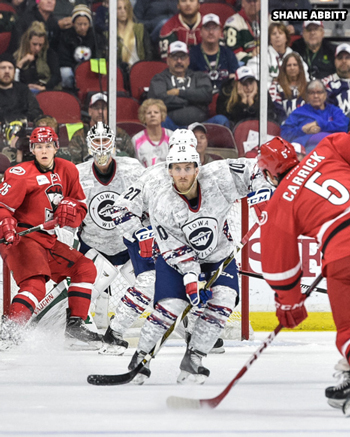 Score Sheet
Tennyson, who had never even scored two goals in a game prior to tonight, broke the stalemate late in the second period with a goal that beat Iowa netminder Steve Michalek between the legs with just one second left on the power play for his first as a Checker. However, the Wild struck back on a man advantage of their own 29 seconds later when Gustav Olofsson’s blast from the point deflected off the Checkers’ Connor Brickley and bounced awkwardly past an otherwise stellar Leighton.

Tennyson, who entered the game with 17 goals in 177 career AHL games, scored the game-winner early in the third when he carried the puck up the right wing on the rush and beat Michalek with a well-placed shot over the left shoulder. Bishop would then extend that lead when he took a nice pass from fellow freshman Lucas Wallmark and went in alone on goal, where he beat Michalek with a forehand-to-backhand deke through the legs.

With Michalek pulled for the extra attacker late in the third period, Tennyson sealed the hat trick with his third goal of the game to send the Checkers on their way. It marked the seventh hat trick in team history and first since Zach Boychuk scored three on March 2, 2014.

Leighton, who has recorded all but one of the Checkers’ victories this season, did more than enough to earn this one as he made several key stops along the way, including an improbable diving save to rob the Wild of what looked like an empty-net goal on a cross-ice pass in the second period. The AHL’s all-time shutouts leader now boasts an eye-popping 1.35 goals-against average and .945 save percentage this season, both of which rank second in the AHL. He has allowed just four total goals in his last five starts.

Charlotte now travels to Rockford to complete its three-games-in-three-days set with a Saturday night match-up against the IceHogs. The Checkers, who defeated the IceHogs twice at Bojangles’ Coliseum last week, will be looking to sweep a three-in-three for the fourth time in team history.

During their win streak, the Checkers have gone from 8th in the Central Division on to their current position of second. They could take sole possession of the top spot with a win and a Milwaukee loss on Saturday … Charlotte improved to 16-6-2 all-time against the Wild, including a 10-3-1 mark in Iowa … The Checkers were playing without two of their top three scorers as Ryan and Brock McGinn left to join the Hurricanes earlier in the day … Valentin Zykov’s career-best, four-game point streak came to an end … With Tennyson, who fired a game-high six shots on goal, serving as captain, Trevor Carrick was an alternate along with Patrick Brown … Wallmark and Andrew Miller finished with two assists each ... Forward Phil Di Giuseppe, who had not yet arrived since being assigned from Carolina earlier in the day, and defenseman Dennis Robertson were healthy extras … Forward Brendan Woods missed the game due to injury.