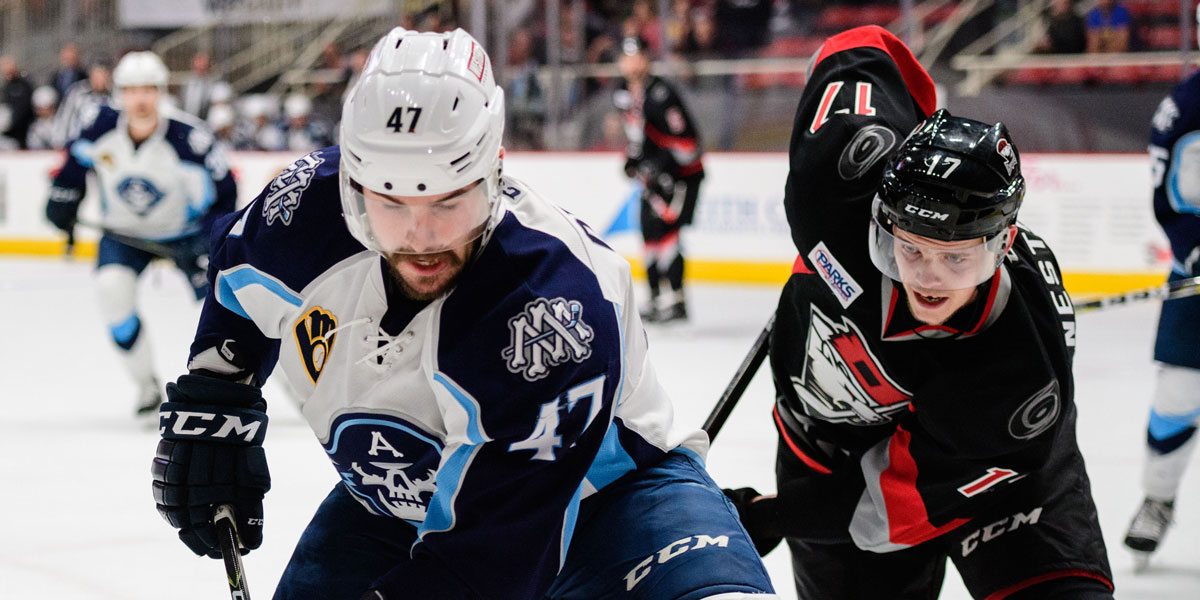 The Checkers'' high-flying offense from last week was nowhere to be found Tuesday night, as they fell to the Milwaukee Admirals by a 5-2 score.

Tallies late in the first and early in the second put the Checkers in a hole to start, but a back-and-forth battle in the final minutes of the frame made things interesting. Andrew Miller put the home squad on the board with a sprawling collection of a rebound, then Connor Brickley tapped home a two-on-one feed at the backdoor shortly after. Pontus Aberg netted his second of the night in the middle of the two Charlotte strikes, but the Checkers headed into the final 20 minutes down by one and riding a wave of momentum.

That wouldn’t carry over into the third, however. An early penalty ended with the puck in the Charlotte net 90 seconds in, followed quickly by the Admirals’ third goal on the mand advantage. That effectively put the Checkers out of it, as their rally attempts fell flat and their winning streak came to an end. Score SheetPhoto GalleryHighlights
Head coach Ulf Samuelsson on his takeaways from tonight: “Probably not a whole lot. Milwaukee came out and was the better team. They played better five-on-five and on special teams. It’s just one of those things where they got it going and we didn’t.”

Samuelsson on the lack of offense: “We didn’t spend too much time in their zone, we weren’t good managing the puck and we didn’t forecheck well at all. It’s hard to create scoring chances when you’re not getting any secondary chances.”

Checkers captain Patrick Brown on the lack of offense: “We lost a lot our battles in our own zone and were chasing them around our own zone. It’s tough to create scoring chances that way. We got a lot of shots but the ones we got didn’t have traffic. It’s hard to score that way.”

Samuelsson on the Checkers’ special teams struggles: “They beat us in the slot there a little bit and we’ll have to make some adjustments because we were not quick enough to cover in certain areas. On the flip side, on our last power play we moved it around well but before that we weren’t winning faceoffs and we struggled with our setup in their zone. We have some adjustments to make there as well.”

Samuelsson on what the Admirals bring to the table: “It’s a good team. It’s a really good makeup and they’ve got four lines that are almost even. They’re a very deep team, their D move the puck well and they get solid goaltending.”

Brown on tomorrow’s rematch: “Just regroup. Whatever it was, guys will tell you different reasons, but just regroup and give it everything we’ve got tomorrow. That wasn’t the team they’re going to see.”

The loss dropped the Checkers to 17-6-1 at home and 0-4-1 in their black third jerseys … Miller’s goal gave him nine points (2g, 7a) during a four-game point streak … Milwaukee has won six of the seven games these teams have played this season, including five in a row. They scored 16 goals in the last three and at least five in each contest … Milwaukee’s Frederick Gaudreau has 10 points in six games against the Checkers this season … Andrew Poturalski’s eight-game point streak came to an end. It was the longest by a Checkers skater in the last two seasons … The Checkers gave up a season-high three power-play goals for the second time this season (Nov. 27 vs. Iowa). Prior to tonight, they had given up just three total power-play goals in their last eight games … Charlotte has gone five straight games without scoring a power-play goal (0-for-12) … Forwards Patrick Dwyer, Kyle Hagel, Mitchell Heard and goaltender Michael Leighton missed the game due to injury … Forwards Erik Karlsson and Sergey Tolchinsky were the other scratches.

The Checkers and Admirals will face off for the final time this regular season tomorrow night at 7 p.m. for Winning Wednesday.