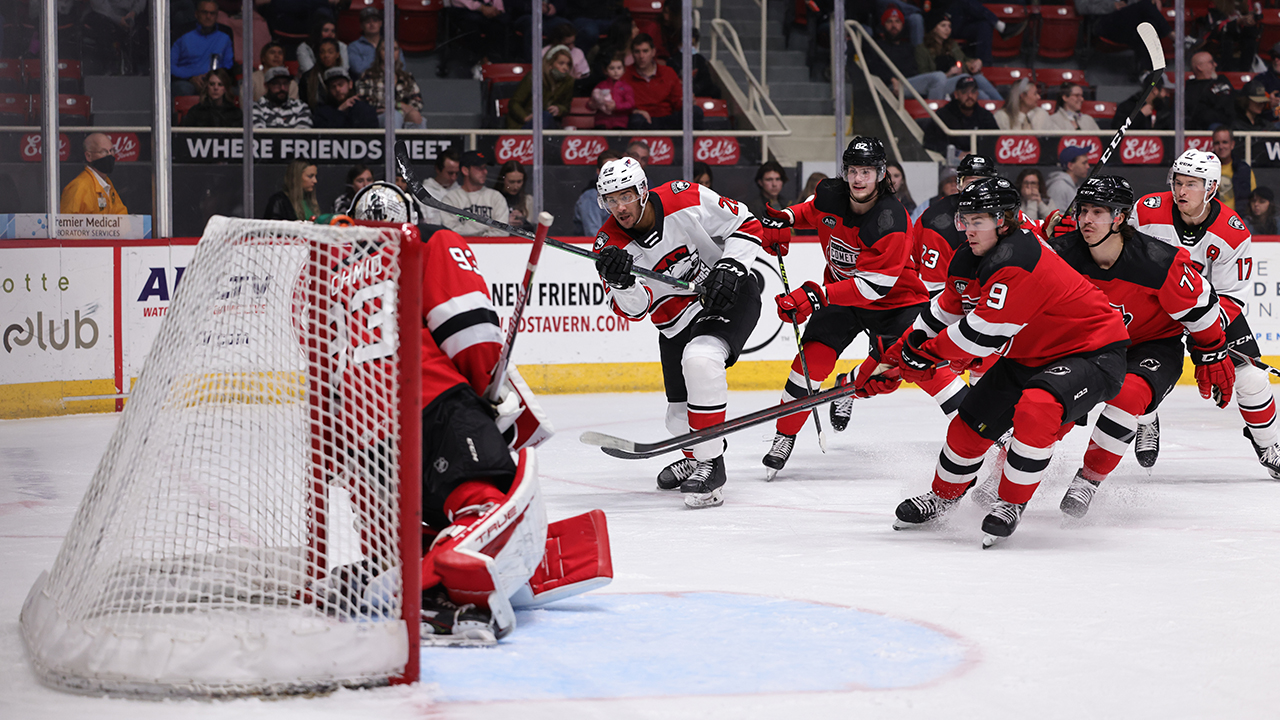 The goalies took center stage for nearly all of regulation, as Joey Daccord stymied the potent Utica offense and locked in a duel with Comets netminder Akira Schmid.

As both offenses attempted to solve the opposition, the lone tally to find the scoresheet came on a two-man advantage for Utica midway through the middle frame.

The Checkers would buckle down from there, powered by multiple spectacular stops from Daccord down the stretch, but the offense couldn’t quite put it together. Schmid finished with a perfect 26 saves and handed the Checkers a tough 1-0 defeat.

SCORE SHEET PHOTO GALLERY
Head Coach Geordie Kinnear on the difference in the game
They scored on their five-on-three and we didn’t score any on the power play. There were chances to score for both groups and it came down to the power play.

Kinnear on the quality of his team’s scoring chances
I thought early we had the right idea. They did a really good job of boxing our guys out and we were trying to shoot for sticks. I thought we had some Grade A’s and I thought they had some Grade A’s. It was a pretty even hockey game and a playoff-type game where they score on the power play and found a way to get it done.

Kinnear on goaltender Joey Daccord
(Daccord) on our power play had a 2-on-0 where he made an unbelievable save. You want to reward his work by coming back and scoring one, and we didn’t. I thought overall the effort was good. We’ve just got to find a way to score those playoff-type goals and execute a little better, especially in the third.

Kinnear on playing without NHL callups Aleksi Heponiemi and Riley Sheahan
Number one, for both guys we’re excited for them to go up. They both deserved it and both played really well here the other night. We talked about guys getting an opportunity and more quality time on ice in this game, and I thought everyone gave an honest effort. We have to execute on some of those plays. Bottom line, our power play got zero and their power play got one. That was the difference.

Forward Zac Dalpe on the difference in tonight’s game
I think execution. We hung in there with the best team in the league and I thought we were better at points in the game. We probably out-chanced them and just didn’t execute. Their goalie obviously played well too. They’re a good team. Tight gaps and not a lot of room out there. Just back at them tomorrow I guess.

Dalpe on how to break through a hot goalie
I wish I had the answer or we would have done it. Just execution. The old hockey saying is to get pucks on net. It sucks to say, but it’s there for a reason. It’s kind of deflating but in this league you don’t get a lot of time to pout so we’ve got to get back at it tomorrow. May the best team win.

Dalpe on playing without Heponiemi and Sheahan
I think guys stepped up. I liked (Luke) Henman’s game and I liked (Scott) Wilson’s game. Those are two guys that didn’t play last game. It’s hard to come in and make an impact and I thought they did. We had two call-ups, guys that probably played each other tonight (in the NHL), which is weird, and that’s just the way this league works.

Dalpe on Joey Daccord
He’s a good goalie. Both our goalies are great and we have three goalies that we trust. The way that Daccord plays the puck – it’s so easy to break out and you don’t spend a lot of time in your end. I think our D have a lot of trust in him and in Gibson. It’s nice to play in front of him for sure.

The Checkers fell to 0-2-0 against Utica this season, while the Comets improved to 14-1-0 overall … Charlotte was shut out for the first time this season … Utica’s 17 shots on goal were the fewest the Checkers have allowed all season … The Checkers had scored the first goal in five consecutive games prior to tonight … Each team received six power-play opportunities … Charlotte played without forwards Aleksi Heponiemi and Riley Sheahan, who earlier in the day were called up by the Florida Panthers and Seattle Kraken, respectively. Those two accounted for two of the team’s four goals on Wednesday … Defenseman John Ludvig missed the game due to injury … Forward Ryan Lohin and defenseman Frank Hora were healthy extras.