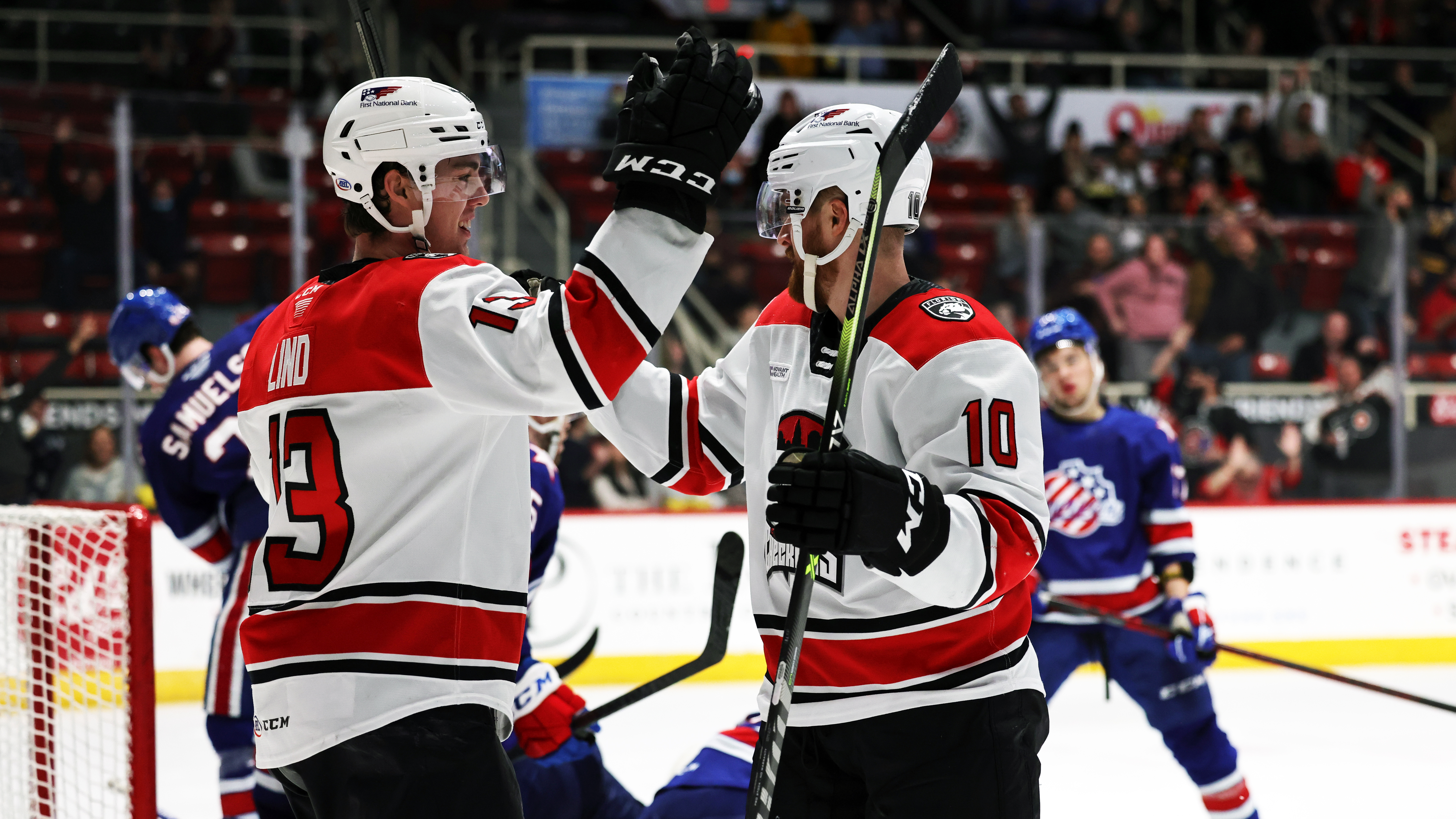 It wasn’t quite the same offensive explosion as last night, but the Checkers took care of business nonetheless, toppling the Americans 4-2.

Scott Wilson continued his red-hot scoring streak by potting a pair of goals on the night - first evening the score early on in the second and then netting the eventual game-winner later in that frame.

Logan Hutsko picked up the rest of the slack offensively, converting on one of Charlotte’s four man advantages and then creating a Rochester mistake that ended up in the back of their own empty net for the Checkers’ final dagger.

Despite opening the scoring and drawing things even in the middle frame, the Americans couldn’t muster any offensive firepower down the stretch as Devan Dubnyk stepped up and claimed his second win in as many starts with the Checkers.

Two quick goals by Wilson and Hutsko got us going to start the second period! pic.twitter.com/GRzUE8VItr

SCORE SHEET PHOTO GALLERY
Geordie Kinnear on the game
What really impressed me tonight is how we started the game. Obviously the other game (an 11-1 Checkers win last night) didn’t go Rochester’s way, but we came out with a purpose behind our game and I really liked our start and it just carried over. What I liked about it is that everyone was pulling the rope in the right direction, and when you have that you have a chance to win every night.

Kinnear on Scott Wilson
He played great. He’s a player that I had last year in the taxi squad (with NHL Florida) for a little bit so we had a little bit of a relationship and that’s built over to here. I challenge him a little bit to be better because he’s been an impactful player and he’s got a couple of Stanley Cups under his belt. He’s a big player for us moving forward, he was big tonight and he’s been big the last couple of games.

Kinnear on the special teams battle
It’s the number one power play over there, or was – I’m not sure if they still are – but it’s very dangerous. We gave up the one tonight, but the guys dug in when the game was on the line and found a way to get it done. The power play obviously scored a big goal there and has been good all year for us.

Kinnear on the team’s mentality after winning five of six
I honestly believe that our guys have done a great job of just staying in the moment. We’ll get a rest day tomorrow, get after it on Friday and get better. That’s just the way the group operates, they don’t look too far ahead. It’s just day by day for us.

Scott Wilson on tonight’s rematch with Rochester
I think they were missing a few guys, but anytime, especially in the first night when you put up 11, they’re going to bring their best the next night. I think just being able to squeak one tonight is a pretty big showing for this group. I think we’re really starting to find our legs. We’re just trying to lead this up into the Christmas break is the biggest part right now.

Wilson on the team stringing wins together
Our first periods, I don’t know if we’ve been out-shot, especially at home, this year yet. Sometimes we’ve made a couple of extra passes and haven’t scored in those games, but just stringing a few together is big just for the guys believing. It’s nice that we’re starting to do it now and not too late in the season.

Wilson on younger players replacing players that have been called up to the NHL
Those young guys stepping up, it honestly gives some energy to the older guys too. Fresh faces and they’re playing super hard, which I think leaks up and down the lineup. I always say that when we’re playing other teams and they’re missing a bunch of guys, sometimes it’s harder to play than when they’re fully stacked. Those guys have done a great job and they’re being rewarded to be here, so it’s been good.

Wilson on finding his scoring touch lately
Sometimes you think you’re working hard and you’re not. I found earlier in the year that’s kind of how I was feeling. I thought I was taking an extra step or making that extra play, but in the last stretch here I think I’ve found myself. I haven’t played a lot of hockey in the last few years just with injuries and COVID, so it’s nice to play a bunch in a row and feel the puck. I think everyone in our team up and down the lineup is easy to play with, so whoever you’re playing with you have a chance to get some points. It’s been good.

Wilson on maintaining focus with the holiday break right around the corner
That’s tough. That’s always tough. A big thing is that we had a good game against Bridgeport (before). They’re a big team and definitely a lot different than Rochester, so I think putting these games behind us and focusing on them in the next couple of days will be important.

The Checkers have won three straight, tying their longest streak of the season, and five of their last six … Wilson’s two goals tonight give him four over a three-game streak. He has three straight multi-point games and six points in his last five. He is now tied with Cole Schwindt for the team lead in goals (9) … Hutsko’s three points (2g, 1a) are a new career high. He has seven points (2g, 5a) over the course of a four-game point streak … Forward Serron Noel, defenseman John Ludvig and goaltender Christopher Gibson missed the game due to injury … Goaltender Antoine Bibeau was a healthy extra.