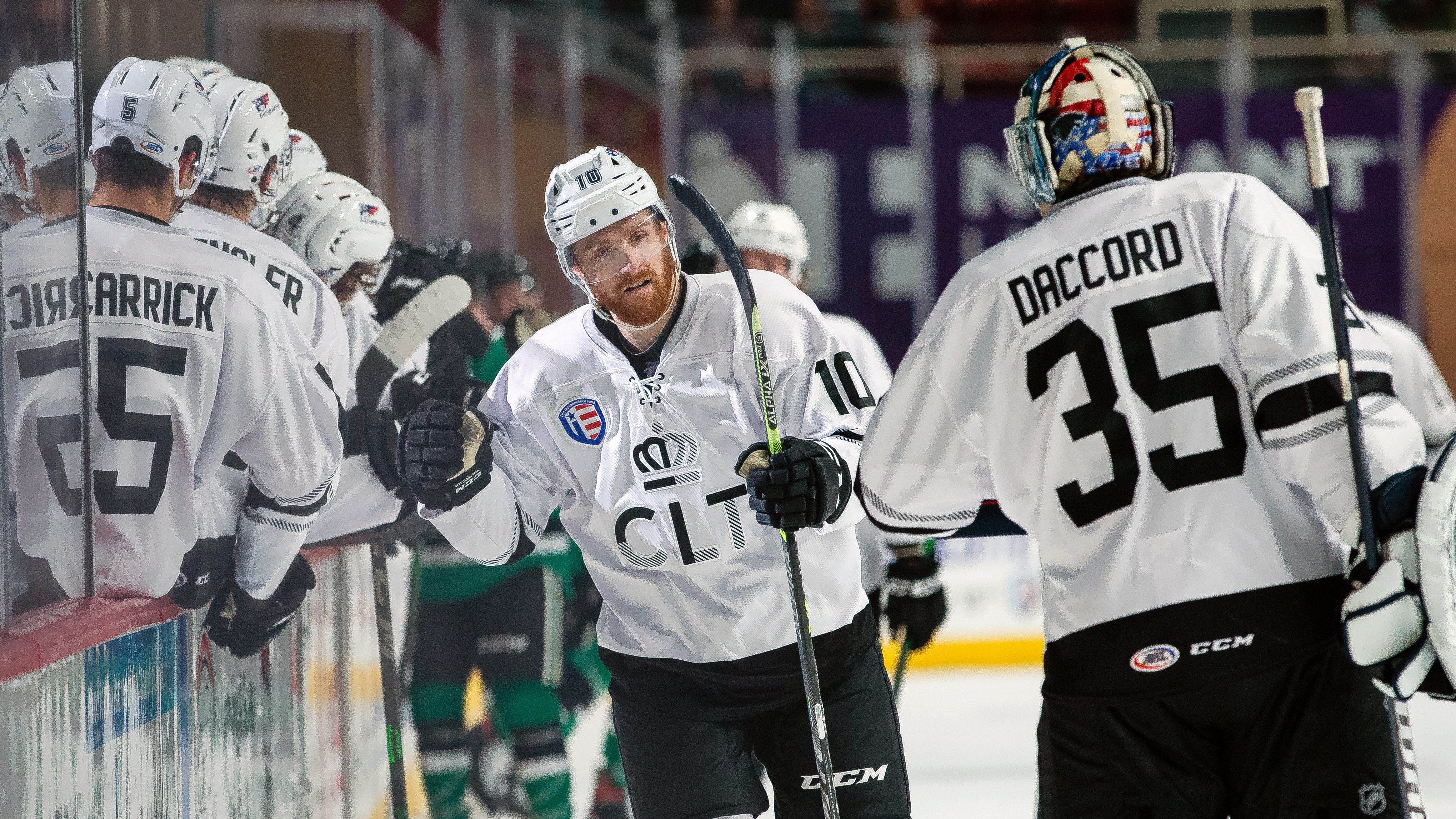 The Charlotte offense put on a show once again Saturday night, obliterating the Stars by an 8-3 final score.

Leading the way was a jaw-dropping first-period performance from Serron Noel. Noel - who entered the game with just one goal on the season - opened the scoring early on for Charlotte, then found the back of the net again later in the frame, then struck again just 33 seconds after that to claim his first career hat trick.

Despite the early moments of the game featuring some back-and-forth play from the two sides - the contest sat at 2-2 midway through the first - things tilted the Checkers’ direction in a big way from there. 15 different skaters recorded a point for Charlottem including a two-goal effort from Zac Dalpe and a pair of assists from Owen Tippett in his Charlotte debut.

Despite the lopsided score the Stars kept plenty of pressure on Charlotte throughout the contest, outshooting the Checkers 35-26. Joey Daccord was up to the task, however, collecting 32 saves while making his fifth consecutive start.

SCORE SHEET PHOTO GALLERY
Forward Serron Noel on his hat trick
It means everything to me. Just the confidence in itself. Obviously I haven’t had the start to the season that I wanted and have had some difficulty putting up points, but I feel like tonight is a new start. I gained a little bit of confidence and I’m ready to roll into tomorrow.

Noel on the team’s offensive confidence as a whole
When everyone gets touches like that and they get points, it’s just building confidence. I think we’re finally getting back to where we were before the break and everyone is getting healthy and recovering. We’re just excited to move forward.

Noel on the crowd of 8,019 at the coliseum
It was amazing to see the support. It’s been a while since we played at home and it means everything to have a home crowd like that that can create energy for us. We’re really happy that they came out to support us.

Coach Geordie Kinnear on playing at home
It’s been a long time since we played at home and it was nice to win in front of the crowd. It was an entertaining game.

Kinnear on Noel’s hat trick
KiWe’re a team that needs everyone to contribute. Serron stepped up in Hartford physically last game and then tonight he obviously contributed three goals. We’re built on that depth scoring and it was nice for Serron to get some confidence, get on the board and be rewarded for some work.

Kinnear on getting Aleksi Heponiemi and Owen Tippett from the NHL’s Florida Panthers
It took a little bit of time to find some chemistry. I moved the lines around to try to find it because we have some bodies come down. Hepo had a really game and Tip does what he does by getting points, but I thought it was a whole team effort. Everyone contributed tonight and that’s what we’re built on.

The team’s special Charlotte Night jerseys raised $32,162 for the Independence Fund and the Checkers Charitable Foundation … Noel’s three goal period came after scoring just one goal in his first 81 periods of the season (27 games). He and fellow rookie Cole Schwindt have the Checkers’ only hat tricks this season … This was the team’s first hat trick at home since Janne Kuokkanen on April 7, 2018 … Eight goals is the team’s second-highest total this season (11 on Dec. 14) … Tippett had his first two points as a Checker in his first AHL game since Jan. 25, 2020 … Priskie’s +5 rating tied a franchise record … Defenseman Nolan Kneen earned an assist in his AHL debut … Forward Grigori Denisenko, defensemen John Ludvig and Gustav Olofsson and goaltender Christopher Gibson missed the game due to injury … Defenseman Matt Kiersted missed the game with an illness … Forwards Ryan Lohin and Craig Martin were healthy extras.