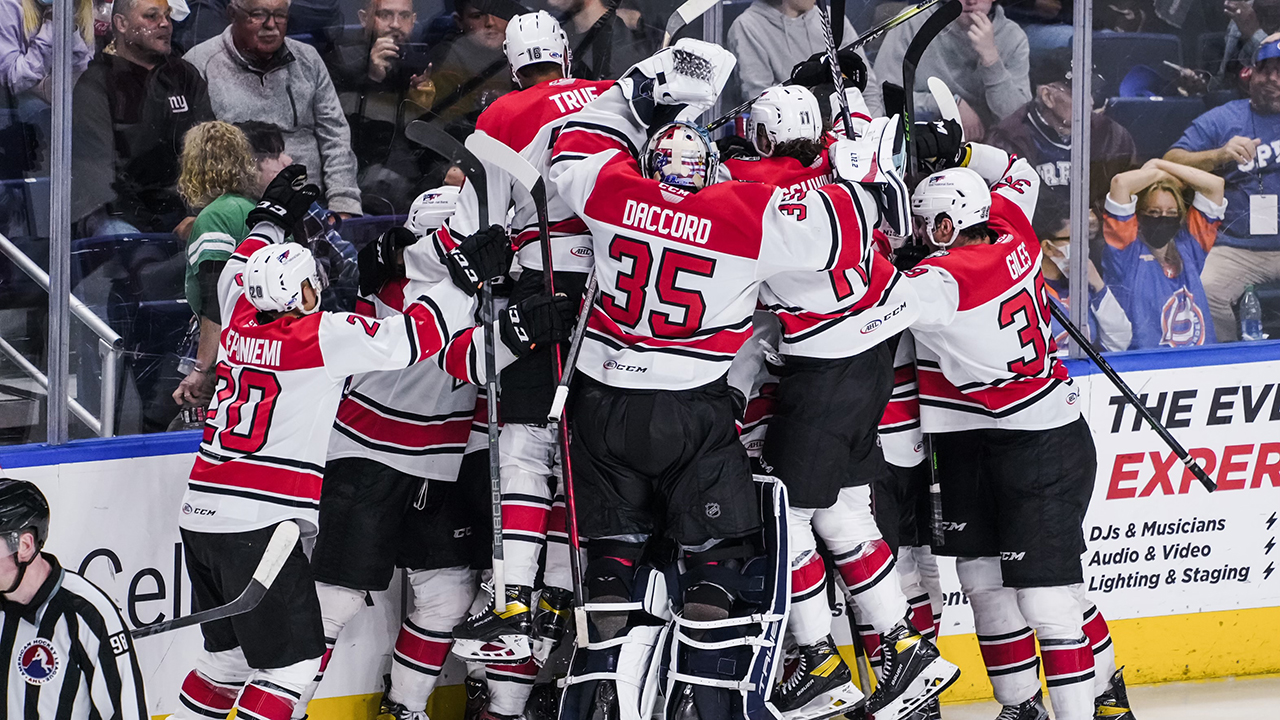 After scoring twice in a frenetic first period, Checkers captain Zac Dalpe completed his hat trick in double overtime to give his team a memorable 7-6 win in Game 2 at Bridgeport on Thursday.

Charlotte, which previously defeated Bridgeport on Tuesday, will now have a chance to sweep the best-of-five series that shifts to Bojangles Coliseum for Game 3 this Saturday at 4 p.m.

Dalpe, the Checkers’ regular-season goals leader, sealed the victory when, not long after his team killed an abbreviated penalty, he collected the rebound of an excellent Joey Daccord save, rushed up the ice on a two-on-one break and shot from the left circle to give the Checkers the win.

That goal came 3:36 into the second overtime – a result that seemed highly unlikely given the game’s incredibly eventful first period that saw Charlotte jump out to a 4-0 lead after 13 minutes. Dalpe opened the scoring just 53 seconds into the contest, with Matt Kiersted, Serron Noel and Cole Schwindt joining the fun.

Just when it seemed like Charlotte could skate its way to an easy victory, Bridgeport scored three times in less than a minute, but Dalpe would restore some momentum by scoring on a two-man advantage to give his team a 5-3 lead at the first intermission.


SCORE SHEET
Bridgeport scored twice in the second period to tie the game, with Charlotte’s Connor Bunnaman and Bridgeport’s Robin Salo exchanging goals in the third to send the game to overtime.

The first overtime would also prove unconventional, as referees disallowed a goal for each team – presumably for goaltender interference, although the official calls were not clear.

The teams will now travel to Charlotte to play out the remainder of the series. Charlotte, which earned a first-round bye as the Atlantic Division Champion, needs to win just one of three on home ice to advance to Round 3.

Coach Geordie Kinnear on Dalpe’s winner
We had a big (penalty) kill. We had to kill for a minute, and obviously you want it on Dalps’ stick on a two-on-one. He did his job.

Kinnear on overtime strategy
I don’t know of any adjustments. As I’ve told everybody, we’ve built in certain things throughout the season, and one of them is mental toughness. You’ve got to be mentally tough. Each shift, you have a job to do and you’ve got to make sure you do your job and be organized. I’m proud of our guys. I thought in the overtimes, especially the first one, we were really good and we just built off of it.

Kinnear on the rollercoaster game
Rollercoaster is an understatement, to be honest. I think it’s a good lesson because we have a lot of guys that are young, first-year guys that are getting their first playoff experience. You talk about momentum, but until you go through it you don’t really understand it and there were a lot of momentum swings tonight. We want to make sure that we keep learning lessons from each game and each shift and keep building.

Kinnear on sticking with goaltender Joey Daccord throughout the game
The easy thing to do is always to pull the goalie, but if you want to take another step you’ve got to have some mental toughness and be able to dig in. Joey has been great for us all year and I thought the guys rallied around him. It’s always a team effort. I though we left him high and dry on some of those grade A (chances), and that’s not our identity and not what we’re about. We’ve got to clean that up, but for Joey I really liked the mental toughness and the dig in throughout the game for him.

Kinnear on winning both road games in Bridgeport
It's important how we play and we keep getting better. I saw some guys get better tonight, and our start was obviously better and you saw a little bit of how we want to play. As it got away from us we had to learn some lessons along the way but then we got back to it in overtime, which is a good sign.

Zac Dalpe on his game-winning goal
It was a bit scrambly after the penalty. I think it was a big block in front and then it was a two-on-one from the paint on down. Willy (Scott Wilson) was yelling to shoot it and I had it in my mind that I was going to shoot it, so thankfully it worked out.

Dalpe on keeping composure despite losing the early lead
Obviously you get punched in the mouth a little bit, so to speak, and it’s all about controlling your emotions. Hopefully you’re playing well into May and June and it’s something you can learn from. I didn’t think there was any panic in our game, which I’m happy about. We had good push-back after their wave and it went from there.

Dalpe on winning both games in Bridgeport
Over my career I’ve thought that Bridgeport is kind of a hard building to win in, and then obviously you throw playoffs in the mix. They’re a good team, so we can use this as momentum going back to the best city on earth.

This marked a new team record for most total goals in a playoff game. The previous record of 11 was set in a 7-4 loss at Binghamton exactly 11 years ago. Dalpe also scored in that game … This was also the most total goals of any Checkers game this season … The Checkers tied a team record for most goals in a playoff game set twice previously, most recently in a 7-3 win at Hershey on May 4, 2019 … Each team had a shorthanded goal in the first period … The Checkers have an all-time playoff overtime record of 7-4 … Dating back to their 2019 championship, the Checkers have won six straight playoff games … Including their stellar run to end the regular season, the Checkers are 18-3-3 in their last 24 games since March 2 … Grigori Denisenko and Max Gildon missed the game due to injury … Dennis Cesana, Max Zimmer, Zach Uens, John Ludvig, German Rubtsov, Justin Nachbaur, Ryker Evans, Luke Henman, Antoine Bibeau and Evan Fitzpatrick were healthy extras.