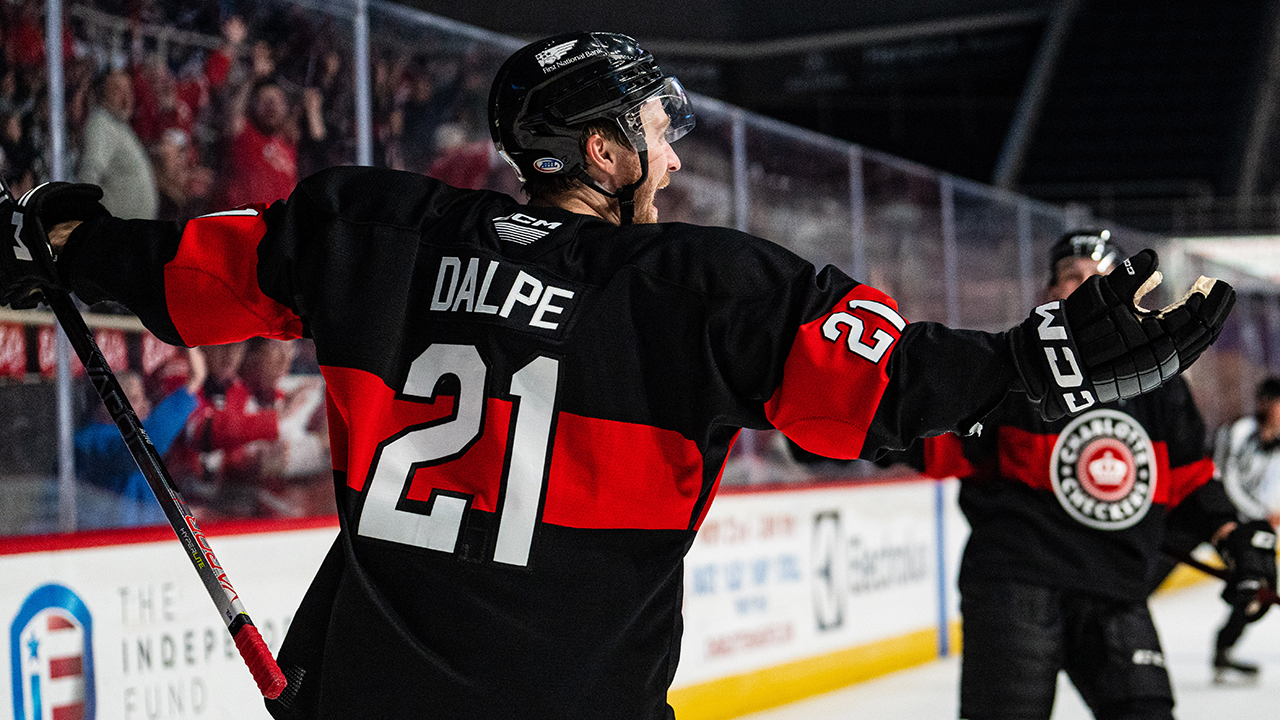 The Checkers continued to be a powerhouse on home ice, taking down the Syracuse Crunch 3-2 on Friday night to remain unbeaten in the Queen City.

After a scoreless first frame, the Checkers broke things open thanks to a pair of power-play tallies in the middle frame - the first on a slick move from Zac Dalpe cutting into the zone and the second an unassisted strike off the stick of Logan Hutsko.

The Checkers carried the play for a long stretch from there, but a pair of penalties midway through the third set up a four-on-four situation that Syracuse took quick advantage of. The Crunch erupted for two goals just 12 seconds apart and reset the contest heading down the stretch.

That drastic turn didn’t rattle the Checkers, who punched back and regained their lead less than three minutes later as Gerry Mayhew swooped around the Syracuse net and found Dalpe in front for the captain’s second of the night.

There would be no more surges for the Crunch from that point, as Alex Lyon and his 25 saves rode things out until the buzzer and the Checkers returned to the win column.

Zac Dalpe is having himself a night pic.twitter.com/2KzG9ybhpT

SCORE SHEET PHOTO GALLERY
Coach Geordie Kinnear on the game
It was wild because we went to 4-on-4s and penalty kills. You want to play 5-on-5. We have experienced guys in there, but a lot of young guys on the back end. It’s a young group that’s coming together and learning how to play winning hockey. We’re happy with the W, we’ll learn a lesson and move forward.

Kinnear on bouncing back to get the winning goal
Gerry made a great play on that – an individual effort to make the back door goal. That’s where the experience comes in. We talk a lot about making mistakes, but it’s how you react after. I’m so proud of the guys because they stuck with it when it was 2-2 and they had the momentum and answer on that goal.

Kinnear on the game’s physical nature
We want to play that way too. I know this group and this coaching staff demands that the guys play hard every single night. I knew that it was going to be a physical game and they were going to bring that element to it. We were prepared for it, but it’s going to get more and more physical as we move forward. We want to make plays under that duress, capitalize on our chances and play the right way all the way through.

Kinnear on his experienced players
We want it from everybody, but you need a great leadership group and to lead by example. Nasher, Dalps, Bitetto, Del Zotto – all those guys. I thought they had excellent games tonight and showed why they’re high-level players. We want the group to believe in each other and stick up for each other, and tonight was a step.

Zac Dalpe on Mayhew setting up his winning goal
When a guy swings behind the net, hits you back door and then doesn’t celebrate, he knows he’s made a good play. Obviously we needed that. We gave up two quick ones on the 4-on-4, which is definitely unacceptable, but we found a way to get back into the game and win.

Dalpe on the team’s character in bouncing back tonight
I don’t know what recipe for success is, but I know we have good people and we have good people on the bench. From the coaching staff to the players that have played a whack of games, there definitely is no panic. That’s why you bring these guys in, and hopefully for the younger guys it’s kind of contagious for them.

Gerry Mayhew on bouncing back in this game
We went back to our game. We got pucks out at our blue line and got pucks in at their blue line. It was unfortunate the two goals they scored right away, but the team never gave up. It was a huge win for us tonight.

Mayhew on giving up the 2-0 lead
It’s hockey, stuff like that’s going to happen. As long as you stay even keel, we know we can win games like that. I think if we just keep playing our game then good things will happen for us.

The Checkers improved to 5-0-0 at home this season. Dating back to last season, they have not lost a home game in regulation since Feb. 11 (20 games). They are one of four AHL teams with a perfect home record this season … Dalpe took sole possession of the team’s goals lead with five in just six games played … After going scoreless in his first three games, Logan Hutsko has seven points (4g, 3a) in his last five outings, including a goal tonight … Goaltender Alex Lyon had his first assist since Nov. 10, 2018, on Dalpe’s first goal. It was the sixth of his AHL career … Forward Chris Tierney missed the game due to injury … Forward Serron Noel, defensemen Santtu Kinnunen and Calle Sjalin and goaltender J-F Berube were healthy extras.