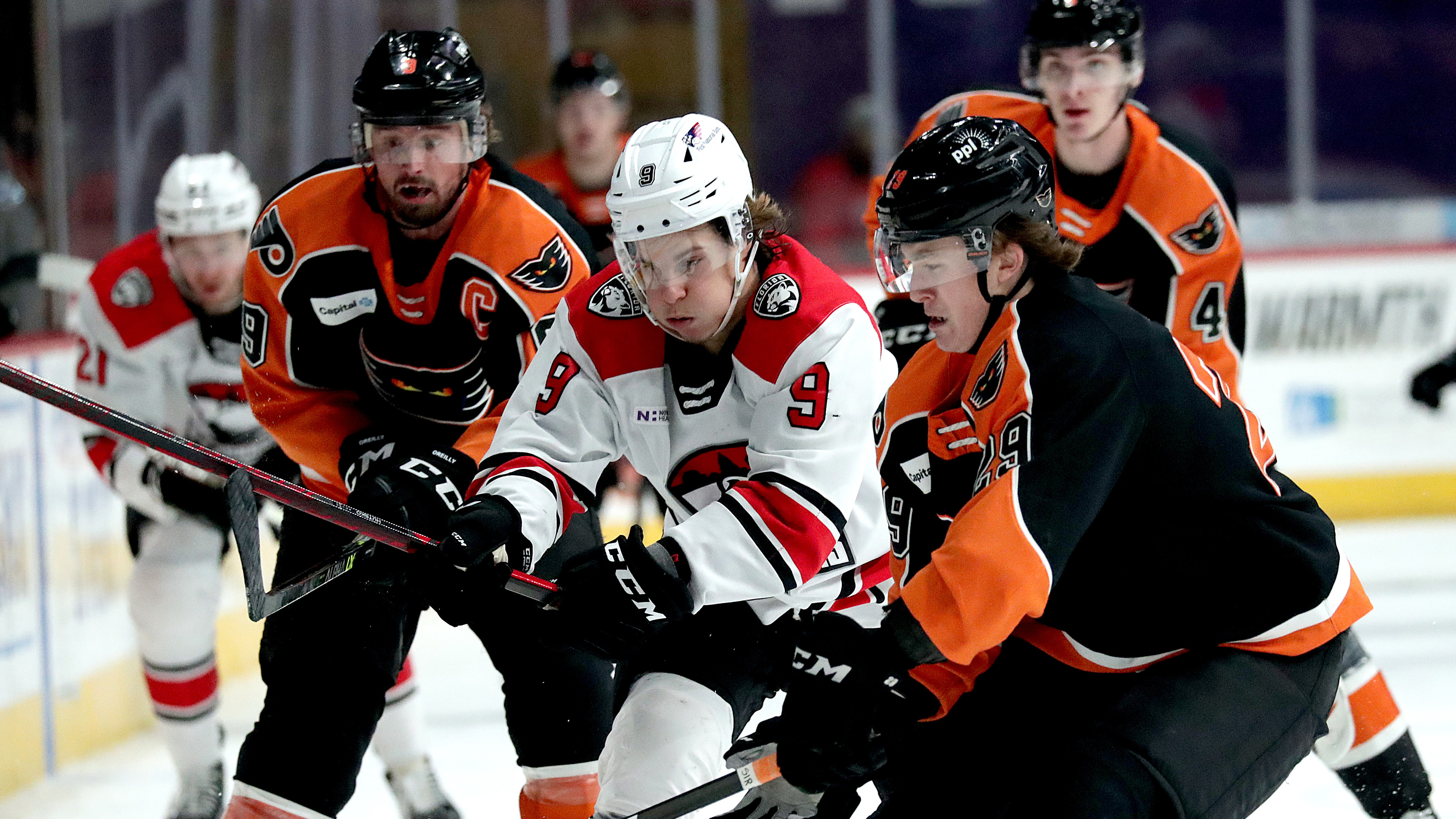 For the second straight game the home side fell behind early - this time courtesy of a Phantoms’ power-play tally just 90 seconds in - and roared back, as Max McCormick and Nolan Kneen both found twine with quick wristers in front.

The Checkers’ 2-1 advantage after one period of play would be their only lead of the night, however. The Phantoms returned the favor with two quick strikes of their own to reclaim the lead heading into the second intermission, then a slick redirection from Hayden Hodgson with under three minutes to go in regulation snuffed out Charlotte’s quest for a comeback.

Hodgson potted an empty netter in the waning moments of the game and cemented a lopsided loss for the Checkers to split the weekend series between the two clubs.

SCORE SHEET PHOTO GALLERY
Coach Geordie Kinnear on the team’s performance
I really liked the first period. The second period obviously didn’t go our way. Guys stopped skating, stopped being in sync as a five-man unit and gave up the lead. I was proud of the effort in the third. We had a breakaway and a couple of Grade A chances to tie the game, and we just fell short.

Kinnear on being out-shot significantly in the second period
We had one guy working and four guys watching, and you can’t play that way. You end up spending too much time in your D zone and you’ve got to work way too hard. If you stay connected as five guys being in sync, it works out the other way.

Kinnear on regrouping during a four-day break between games
We need to look at some of our key guys like Fleury and Connor. It’s a tall order for those guys to play that many minutes. Important minutes too, not just minutes. It’s a reset, but with the group we have and all the new faces, we won the last two and lost today. We’ll focus on getting better. If rest is what we need, then I’ll give it to them. The whole year has been about getting better every single day, so we’ve got to make sure we do that.

McCormick’s goal gave him five points in three games since returning from a month-long NHL stint … Alex True’s assist gives him a six-game point streak at the AHL level (2g, 4a) … Kneen now has four points (1g, 3a) in his first six AHL games … Kole Lind has seven points (4g, 3a) in his last six games … The Checkers were out-shot 20-3 in the second period. It was the most shots allowed by the team in a period this season … The Checkers had two forwards, four defensemen and two goaltenders on professional tryout contracts … Forwards Henry Bowlby, Grigori Denisenko, Luke Henman and Ryan Lohin, defensemen Max Gildon, John Ludvig and Gustav Olofsson, and goaltender Christopher Gibson missed the game due to injury.