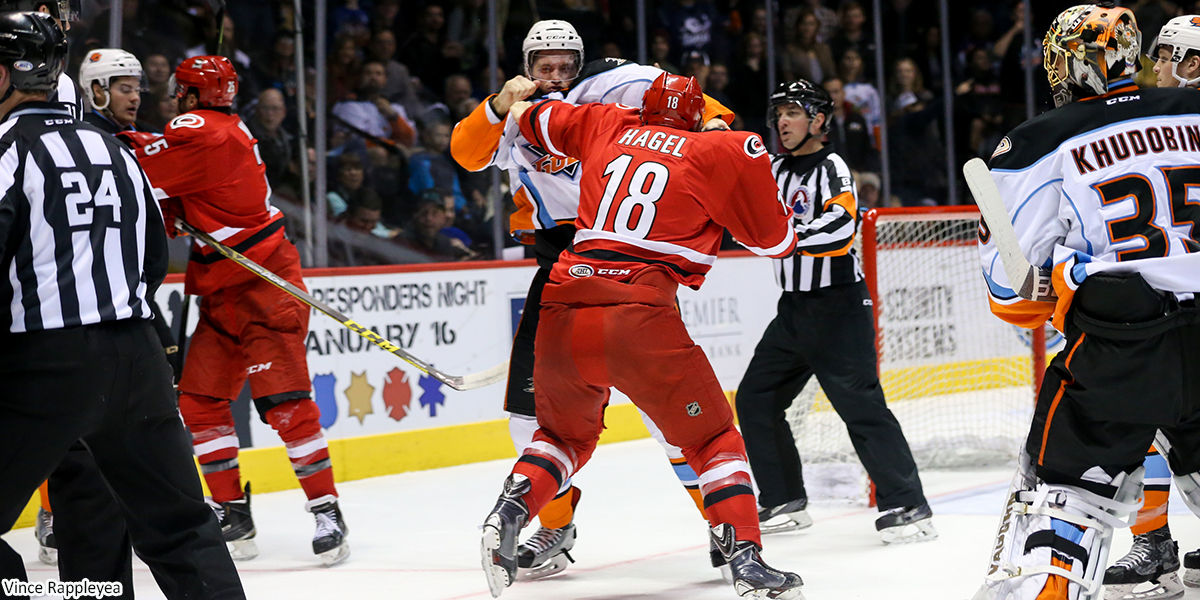 With a new set of rules heading into the 2016-17 campaign, the AHL is cracking down on fighting.

Had this rule been in effect a season ago, 20 AHLers would have been subject to at least a one-game suspension, including Charlotte’s own Kyle Hagel.

The veteran forward has amassed 953 penalty minutes over his eight years in the AHL, including leading the Checkers in each of the last two campaigns. Established as one of the top fighters in the league, the rules hit home for Hagel, but he understands where they’re coming from.

“I never would have voted for that rule, but I think that that’s the way the game is trending anyway,” said Hagel. “There’s less and less staged fights and less and less fights in general. The game has been trending towards having four lines of guys who can play and less having a guy who’s strictly an enforcer. Like I said, I wouldn’t have voted for it but there’s nothing you can do about it. You can’t change it.”

The rules also take aim at the staged fights that Hagel mentions, with any players who drop the gloves immediately prior to or following a faceoff each earning a game misconduct.

According to him, those new penalties could have a positive impact on fighting across the board.

“I actually think that it might improve the quality of the fights better because it essentially gets rid of all the meaningless ones,” said Hagel. “It makes the fights that you do get in more important.”

Hagel has noted many times his reasons for fighting, and with the rules cutting away some of superfluous bouts, his dropping the gloves becomes all the more impactful.

“All of the good fights that you need, like sticking up for a teammate or trying to change the momentum of a game, that fight is going to mean so much more because your teammates are going to know that that’s one of only 10 that you’re allowed,” said Hagel.

At the conclusion of last season, Hagel was saddled with 18 fighting majors, which would have garnered him a total of 14 games suspended overall. To avoid that, he’ll head into this season with the new procedures in the back of his mind.

“You’re going to have to feel it out,” said Hagel. “But there will definitely be a rationing process throughout the year to make sure you use them at the best times.”

He made it clear, however, that the new rules won’t change the way he handles things when called upon.

“That doesn’t mean that I won’t stick up for one of my teammates, even if I have 10 fights,” said Hagel. “If I get 11 or 12 or 13 and I have to eat those suspensions, then you might have to do it. If I’ve had 10 fights and there’s three games left in the year and someone runs my linemate from behind or someone tries to steamroll our goalie, I can’t just stand there on the sidelines and not do anything. You still have to get in.”

The main aim of the new slate of rules is cut down on the amount of one-dimensional fighters, players bred from eras past that are on teams for the sole purpose of acting as an enforcer with not much else to offer.

Lucky for Hagel, he doesn’t necessarily fit that mold.

The 31-year-old forward enjoyed his best offensive output since 2010-11 last season. Hagel was a driving force on a formidable fourth line for Charlotte, one that consistently pressured the other team and helped carry some of the offensive weight for the team as a whole, and served as a key leader in the locker room, serving as an alternate captain and helping young players adjust to the pro game. That style of character and leadership fits Hagel more than any other.

“I love playing hockey,” said Hagel. “For me, it was never just about fighting. It was always about being a hockey player and if you have to fight then sure, you get in there.”

While it may be unexpected from an outside perspective, Hagel is welcoming the league’s shift.

“I think with there being less of an emphasis on fighting this year, there’s more of an opportunity to go out there and contribute with the puck on your stick or just being a hockey player,” said Hagel. “I’m excited for that. That’s when I’m having the most fun, when I’m out there playing. I look forward to having another good offensive year this year.”