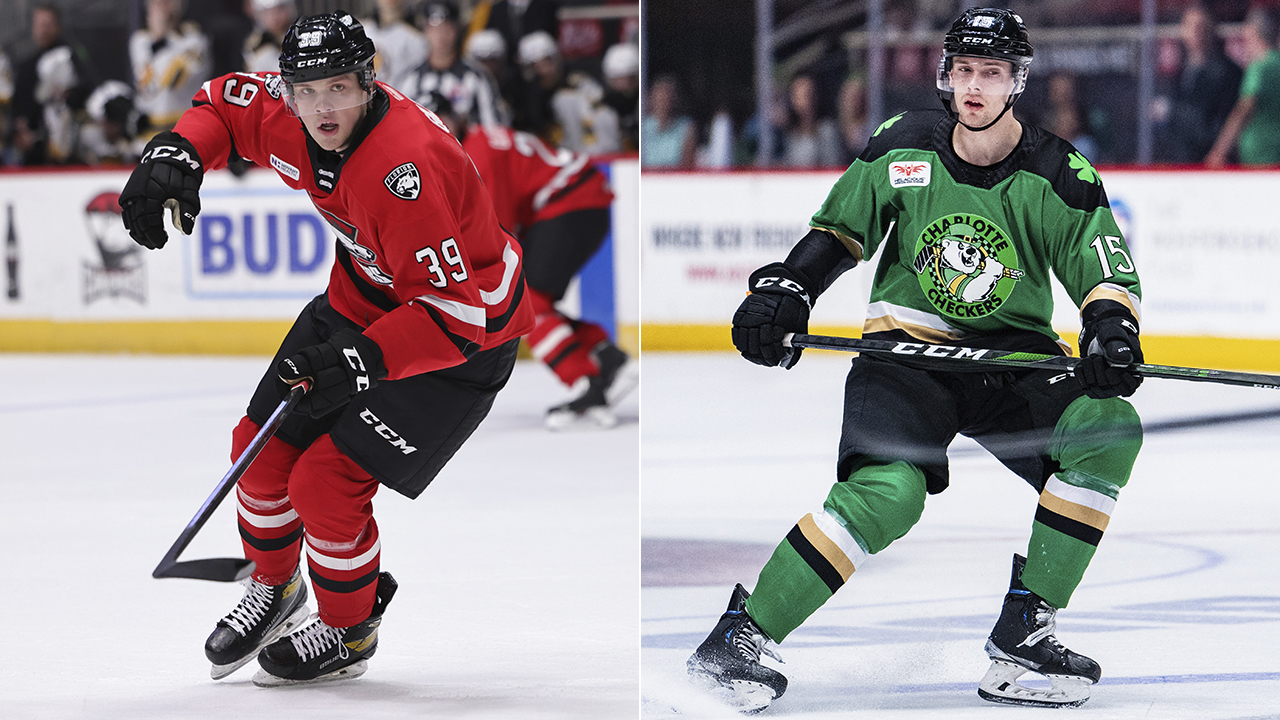 On March 12, Zach Uens and Patrick Giles were helping lead their respective college teams into the quarterfinals of the Hockey East Tournament.

Two weeks later, they’ve jumped headfirst into the pro game and are fully immersed in a Checkers team honing in on the home stretch of the season.

“It’s been awesome so far,” said Uens. “We’ve got a great group here, they’ve welcomed me with open arms.”

“The guys have made me feel like I’ve been here for the whole year,” said Giles.

Around this time every season there is an influx of young skaters hitting AHL rosters as their final college seasons end and they look to get a taste of the pro game before their proper rookie campaign. Uens - a Florida draft pick out of Merrimack College - and Giles - coming off of a strong senior year at Boston College - are two such prospects getting a feel for the next level.

Uens and Giles got to draw their first impressions of the pro game last weekend, as both skaters made their pro debuts during the three-game series against the Bruins.

“Everybody seems to be in the right place at the right time, all the time,” said Uens, who signed an entry-level deal with the Panthers before joining Charlotte. “It’s nice that way, where you know where guys are. But obviously it’s so fast so you have to make decisions quicker.”

The new pros didn’t have much time to acclimate to their new surroundings, instead letting their game speak for itself as they jumped straight into action.

“It doesn’t let you think out there, you’re always tuned in and focused,” said Uens. “I think that’s going to help me progress my game, just get thrown in there and being able to sort things out for myself and not having to sit back so much.”

That quick movement into the lineup was by design.

“Something Coach mentioned was not to dip your toes in, just jump right into the deep end,” said Giles. “I think that’s what I did this weekend. It’s all been coming at me really fast, I’m just trying to enjoy it and contribute where I can to this successful team.”

Uens and Giles both showed promise in their ice time over the weekend, but what the coaching staff is really honed in on is how they progress over the last two months of the season.

“It’s always important to remember, it’s not just the first couple games that you play, it’s over time,” said Kinnear. “Be an every-day person, come to the rink ready to go. It’s easy when you feel good, it gets harder when you don’t feel as good and you still have to bring it. The group demands it.”

The duo recognize that a strong showing now can give them a leg up when training camp rolls around.

“It’s huge,” said Uens. “Just so I know what to expect and I can take the time now to sort of figure things out for myself and then jump right into it next September here and really take the reins.

“Right now I just want to get comfortable with my surroundings in Charlotte,” said Giles, who mentioned the benefit of having his former BC teammate and ‘good buddy’ Logan Hutsko here. “Knowing the players and the coaches and building that trust and those relationships going into a full season next year.”

While both Uens and Giles are balancing contributing to a good Checkers team on the hunt for a deep playoff run and setting the stage for their pro career, the message from the coaching staff is simple - stick to what got you here.