Director of Broadcasting and Corporate Servicing 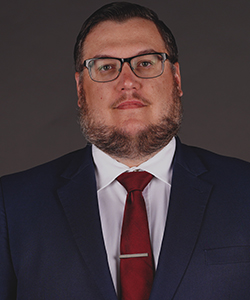 TJ Chillot is a broadcasting/media relations specialist with a mountain of sales experience focused on customer service.

Before arriving in the Queen City, TJ worked for three seasons with the NAHL’s Austin (MN) Bruins where he performed a number of duties including marketing, ticketing, game night operations, graphic design and media, social media and was the team’s play-by-play broadcaster for all home and road games. In 2019-20, TJ was selected by his peers to represent the NAHL at the annual Top Prospects Tournament.

Previous to his time in Minnesota, TJ spent a season at the professional level with the Mississippi RiverKings of the Southern Professional Hockey League in 2017-18. In his lone year with the RiverKings, TJ performed duties such as community development, marketing, and broadcasting. The latter for which was awarded the SPHL Broadcaster of the Year Award.

TJ’s early career consisted of working in automotive retail for seven years where he rose to the position of Business development manager with the responsibility of leading a team of 10-15 customer service reps assisting customers on both the sales and service side of the dealership. In addition, TJ began his hockey broadcasting career with an internship with the Lehigh Valley Phantoms of the American Hockey League and also worked at his local ESPN Radio Affiliate in Eastern Pennsylvania. As an intern with Lehigh Valley, TJ was honored to have served on staff during the 2016-17 AHL All-Star Game. At the same time, while with ESPN Radio of the Lehigh Valley, he produced, hosted and co-hosted sports talk radio shows, and assisted on broadcasts for Division I athletics (Lehigh University) and MiLB (Lehigh Valley Ironpigs).

Originally from Allentown, Pennsylvania, TJ currently resides in Charlotte. His hobbies include going to concerts, sporting events, and relaxing pool-side.