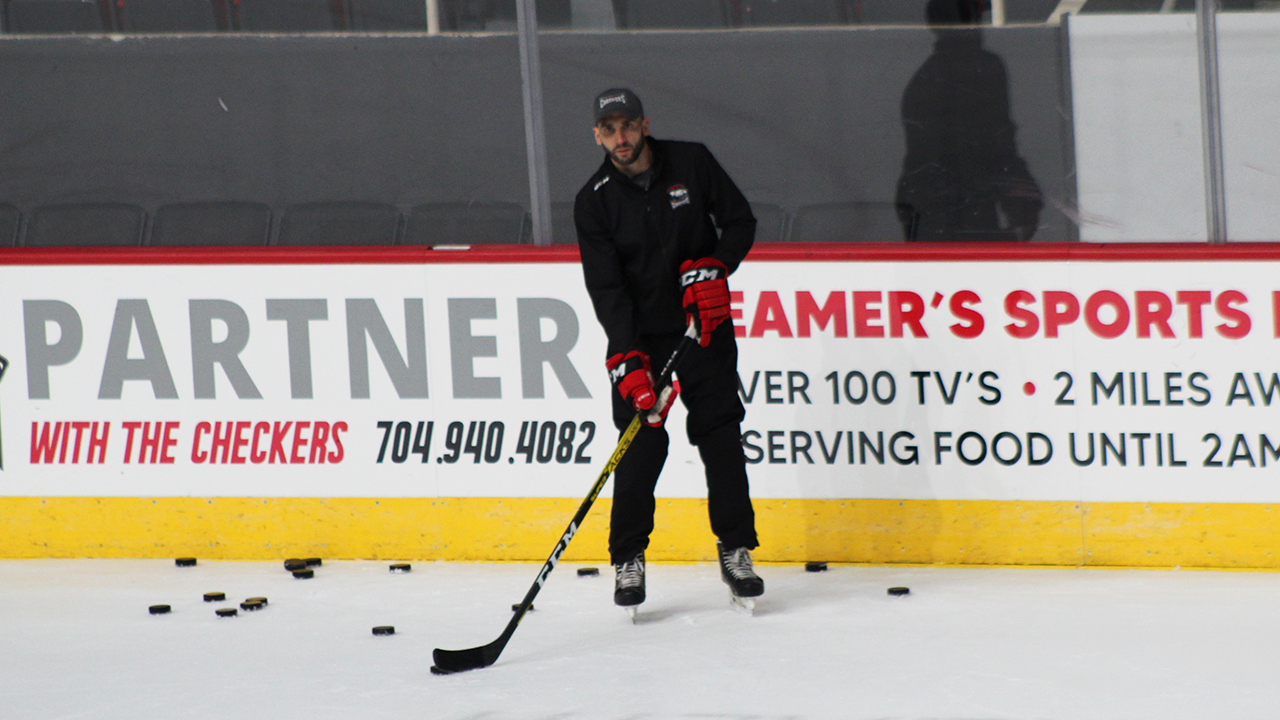 The goaltender portion of Charlotte’s roster has been fluid, to say the least.

Seven different netminders have filtered through the crease and recorded a win for the Checkers - the most in the league thus far. But through the waves of transactions there has been a consistent presence around the crease for Charlotte who can typically be found working one-on-one with the netminders before and after practice.

Leo Luongo has been with the Panthers organization for six years, starting when their AHL affiliate was in Springfield, then assisting in Syracuse last season before heading to the Queen City as the Checkers’ goalie coach.

“This year I’m here 90 percent of the time,” said Luongo. “I have other responsibilities with the goalie department now too, with scouting and things like that. But it’s been great. Charlotte is an awesome town and it’s been a pretty cool experience so far.”

By having Luongo on the ground in Charlotte for the majority of the season, the Panthers create a direct line from the big club to their developing prospects.

“The NHL has grown a lot in recognizing that you can’t just leave guys on an island, especially young prospects,” said Luongo. “I think they need to have the support system to be able to work on some things and when things are not going well to be able to lean on somebody to work their way out of it.

In 2020 Florida established the “first-of-its-kind” Goaltending Excellence Department, and as the importance of creating a structure for goaltending prospects has become more apparent, Luongo’s role has become more integral to the whole process.

“That’s one of the things with the Goalie Department, everyone is on the same page of how we want guys to develop and how we want to teach. So that way when Spencer [Knight] is here he’s getting the same coaching that he’s getting when he’s in Florida - the same things we want to work on and the same approach.”

Knight has been a prime example of that thinking in action. After turning heads in late-season appearances a year ago, 2019’s 13th overall pick began his proper rookie season in the NHL before joining the Checkers.

That assignment can be a challenge for young players, so having Luongo in Charlotte to echo Florida’s sentiments and continue Knight on track developmentally is crucial - both physically and mentally.

“The communication is super important,” said Luongo. “When they talk to him up top they make sure that the message is that this is not a punishment. He’s only 20 years old and ultimately you don’t really see 20 year olds in the NHL - nowadays especially. For him I think it’s important to just understand that it’s part of the process and development. You’ve got to be where your feet are - if you’re down here, you’ve got to make sure you’re doing everything you can to be the best version of yourself so that when it comes time to play, you’re ready. You can’t be spending time sulking or pouting.”

That structure has proved to be a strong asset in this case, as Knight has taken things in stride.

“I think Spencer has done a great job with that, he’s fully aware of what the game plan is for him,” said Luongo. “He’s still very young and has a lot to learn and he’s embraced that and has a positive attitude through the whole process.”

While Knight stands out as Florida’s top goaltending prospect, he’s hardly the only netminder that Luongo has worked with this season in Charlotte.

As is the nature of the AHL, there has been plenty of roster turnover through the last few months, and Luongo has had the task of balancing how exactly to approach each individual player’s needs.

“Every situation is different,” said Luongo. “Guys are at different points with their own game at any point in the season. If a guy is thriving, you want to keep maximizing on what he’s doing well and if a guy’s struggling you kind of want to get back to what made him successful in the first place.”

The Checkers’ dual affiliation with Seattle has added an extra wrinkle to Luongo’s job, giving him a bigger stable of netminders to work with.

“It’s been great working with those guys,” said Luongo. “I know Antoine [Bibeau] a bit since he’s from Quebec and I’ve worked with him in the past in the summer, and Joey [Daccord] - I’ve always liked and admired the way he played when he was with Ottawa so it was exciting for me to walk into a season and get to work with him and hopefully help him in his process to get to the NHL.”

Luongo’s presence with the Checkers is proving to be a key factor in the success of Florida’s Goaltending Excellence Department, while also helping boost the play between the pipes for any netminder that sets up in the Charlotte crease.