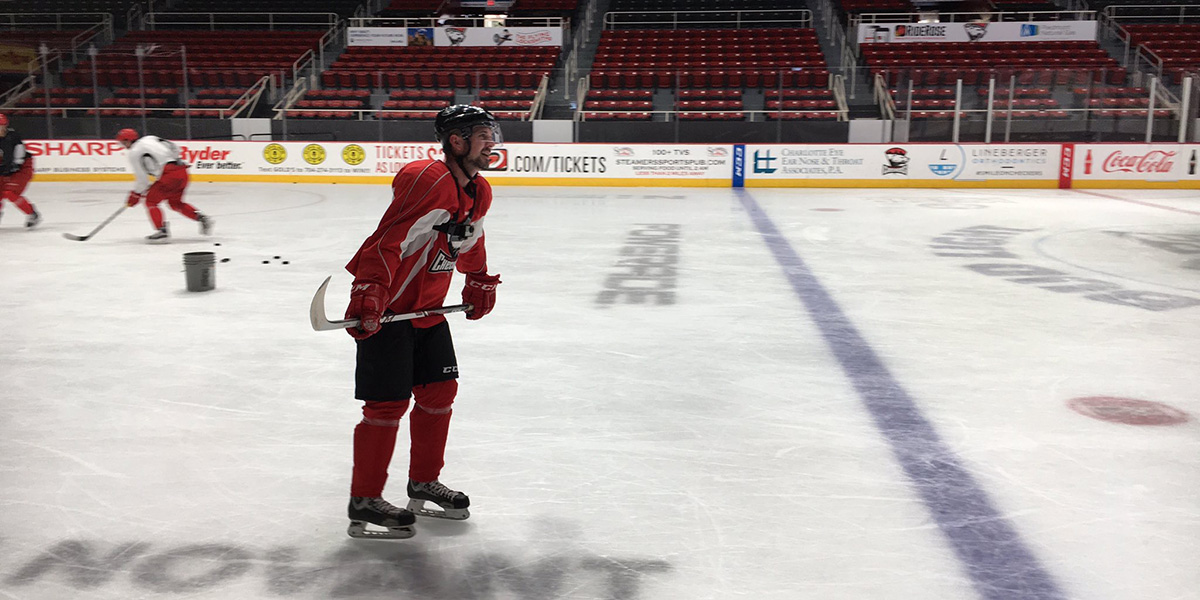 With NASCAR Night coming up this weekend, the Checkers had a special guest join them at practice this morning.

Michael Annett, driver of the No. 5 JR Motorsports Chevrolet Camaro in the NASCAR Xfinity Series, threw on some gear and took part in some of the team’s drills. To the surprise of some of the players, Annett didn’t look out of place on the ice.

There’s a reason for that.

“Probably from age 7 to 17, I was traveling all around the Midwest with my mom going to hockey tournaments,” said Annett. “Then I went to the USHL for two years.”

Annett was a defenseman for the Waterloo Black Hawks from 2003-05 in the USHL, a tier-1 junior league, playing alongside current San Jose Sharks captain Joe Pavelski for a year.

“It was great,” said Annett of his time in the USHL. “The brotherhood and the family was the best. You bring 30-something kids to the Midwest and there’s not a day you’re not over at somebody’s house playing video games or something like that. The brotherhood of it is what I remember the most.”

An Iowa native, Annett helped the Black Hawks to a Clark Cup championship and earned the league’s Most Improved Player honors in 2004-05. But without an abundance of points (0g, 8a in 100 games) or size, he made the decision that hockey wasn’t going to be his future.

“I tell people I was probably was one of the least talented people on the team, I just worked as hard as I could,” said Annett. “I’m 5’10”, a buck 80, so I might have been able to play D-3 and then went and got a desk job. But I had the opportunity to start racing and I went with that.”

As Annett puts it, a week after Waterloo lost in the 2005 playoffs, he was in a racecar getting ready to embrace his first love.

“I grew up in racing,” he said. “The first seven years of my life I was at dirt tracks across Iowa every weekend. That’s what I grew up around. It’s something that has always been in my blood and something I always wanted to do.”

Annett excelled after making the jump to racing, carving out an impressive career behind the wheel, including finishing fourth in the NASCAR Cup Series Rookie of the Year standings in 2014. While it might not seem like it, a lot of the lessons Annett picked up playing junior hockey have seamlessly transferred over to the world of racing.

“People don’t realize how much of a team sport racing really is,” said Annett. “Obviously you have the guys who go over the walls for pit stops who are more important now than ever. I’m driving the car, but everyone working together and having the same goal throughout the week is what makes a good race on Saturday or Sunday with a chance to win.”

Hitting the ice this morning marked the first time that Annett had suited up in over a decade, and while he was a bit hard on his performance, the 30-year-old driver held his own, working in with the Checkers players and even burying a couple shots.

“It was a little embarrassing,” he said. “Sometimes I don’t like to tell people that I played Junior A because when I do skate you’d think that’s not possible, but it’s still a lot of fun. It’s something I wish I could do more often.”

Annett will join several other drivers on Saturday for NASCAR Night at Bojangles’ Coliseum, signing autographs for some of the racecar-loving Checkers fans. Currently residing in Mooresville, Annett has witnessed firsthand the growth of the sport in the South.

“You go to the sporting goods store in Des Moines and there’s a whole hockey section and it’s kind of hard to find that here,” said Annett. “But seeing what the Checkers did with Bojangles’ Coliseum last year and embracing the city and the sport, it’s a good sight to see for sure.”