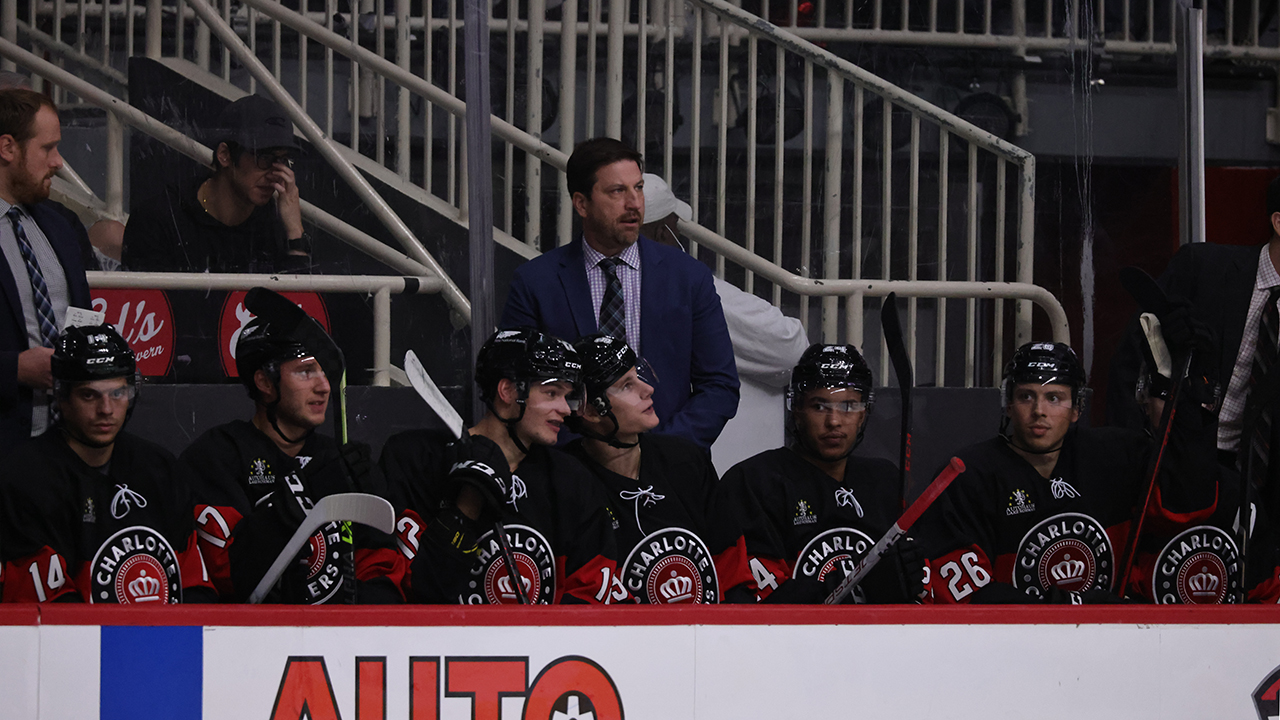 When training camp kicked off, the Checkers’ roster was heavily comprised of new faces, giving the team the added challenge of melding a group of skaters who have never played with one another into a cohesive unit in a short amount of time.

Fast forward a few weeks and a perfect four wins ahead, and Charlotte is certainly trending in the right direction.

“They’re starting to come together,” said Head Coach Geordie Kinnear. “You’re starting to see pockets of it during the game where there’s some chemistry.”

Working together toward a common identity has been one of the coaching staff’s biggest talking points to the team, something they have harped on since the start of training camp. The team’s progress on the ice seems to indicate that they’re buying in.

“ [Kinnear] has been preaching the same stuff he always does and we’re just trying to find our game,” said defenseman Johnny Ludvig. “We’ve got a pretty fresh, new group of guys this year and we’re trying to get familiar with each other. We’re just trying to build that every day coming into work.”

Getting the team as a whole to gel together as a unit is only half of the puzzle though, as the coaching staff continues to explore combinations in search of their ideal lineup - mixing things up across the board through the first few contests while waiting for matches to appear.

“Guys are going to have to tell me with their play if there’s chemistry there,” said Kinnear after Friday’s win. “We have to sync as a group first and then we’ll keep building the lines as we move forward.”

Searching for chemistry among the lineup will be an ongoing project for the coaching staff, especially as the team takes on the challenge of their first road trip. But in terms of simply coming together as a group, this Checkers squad has quickly found their groove.

“I think for this early in the season we have a good group of guys in there, we’re all pretty tight,” said Ludvig. “So it’s been easy to find chemistry for us, and for other teams it might not be that way. So we’re just building off our chemistry and getting used to our systems, we’re going to be good.”

Along with assembling a consistent lineup, the coaching staff is also spending the week ramping up the implementation of the team’s systems - essentially a blueprint of the team’s strategy on the ice.

Leading up to the season opener, Kinnear’s approach was to not inundate his team with too much information - aiming to avoid “limiting the guys’ ability to play hockey.”

Now, they’re starting to fold in that information as the team preps for another slate of contests.

“We’re building those infrastructures,” said Kinnear. “My job is to make sure they’re organized, their job is to make plays and skate. We’re still working on the organized part but we want them to play hockey, not overthink it.”

Working within the system (which typically echoes what Florida is running) should help the Checkers continue to grow as that cohesive unit as they build towards claiming a team identity. It also provides the framework to let the plethora of skill across the roster take center stage.

“That’s a big thing that they preach - we trust our system and then on game days we just go out and play the game,” said Ludvig. “The more we learn our systems and get used to them, the more we can just play hockey.”

This Checkers squad is one of the most veteran-driven in recent years, with a wealth of experience filling up the roster. Those battle-tested skaters are also proving to be some of the most impactful to start the season.

Riley Nash, Zac Dalpe and Chris Tierney are all producing over a point per game. On the back end, Anthony Bitetto and Michael Del Zotto have been called upon heavily through the first four games - in a variety of situations - and held things down on the blue line.

Those five skaters have accumulated nearly 2,300 NHL games altogether, and that experience has shown through in Charlotte.

ON THE ROAD AGAIN

After opening on home ice for the first time in franchise history, the Checkers are now set to hit the road for the first time this season. They’ll travel to Providence for a pair of contests on Friday and Saturday before visiting Bridgeport on Tuesday.

While trekking out on the road provides a challenge, it also gives the Checkers an opportunity to continue growing together as a group.

“I look at it as - you’re playing the best game in the world with your best buddies at a high level,” said Kinnear. “It’s the best. On the road you’re with those guys a little bit more. You get to sit down for dinner and talk about the games afterwards. It’s a great thing.”

Charlotte’s hot start has the team riding high in the standings and cruising into this road trip with a high level of confidence. But they haven’t lost sight of the rollercoaster that is an AHL season.

“Just don’t get too high, don’t get too low,” said Ludvig. “Just keep working at what we’ve been doing good and cut out the bad things. Just continue on.”

“I want to make sure we don’t look behind us,” said Kinnear. “Because those games are over with now and we’re going into some tough buildings.”