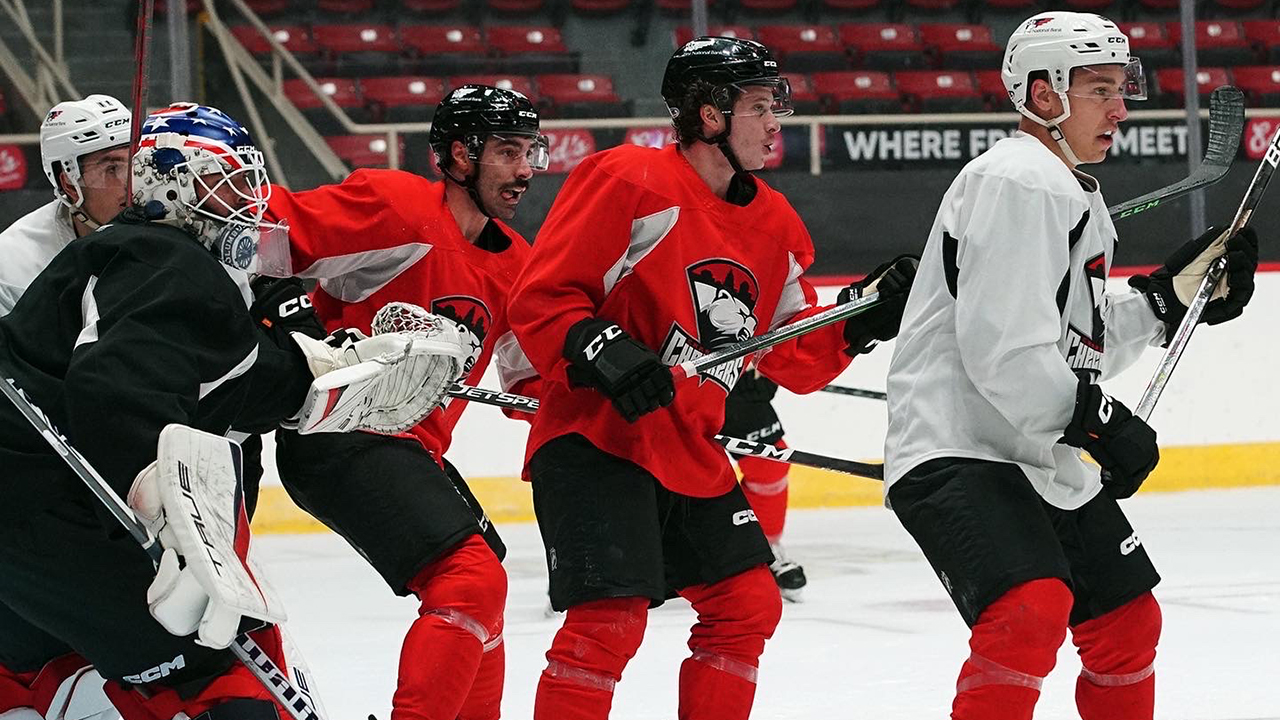 For each of the first four days on the camp schedule, the coaching staff opted for an hour-long, intra-squad scrimmage.

“I feel it’s important to scrimmage,” said Checkers Head Coach Geordie Kinnear. “I want the guys to get the touches and the physicality. Getting into game shape and getting ready to go, you have to get into those one-on-one battles and puck races.”

The scrimmages - which attempt to emulate a real game by featuring referees, stoppages, and an intermission - aim to get the skaters into the mindset of a regular season contest in lieu of a traditional preseason schedule.

Even for vets like Dalpe, who suited up for Florida during its preseason slate over the last few weeks, simulating game situations goes a long way toward jump starting their game.

“Guys who didn’t get exhibition games at rookie camp or with the big club, they have to treat it as such,” said Dalpe. You do drills all summer long but there’s nine other guys on the ice during a game so you need to work with that.”

Training camp will shift into the more traditional practice format soon, but for the time being these high-intensity scrimmages will go a long way toward defining this squad.

“We’re just focused on every day,” said Kinnear. “This is a new challenge for the coaching staff, we have to be able to find that identity. I saw a little bit of it today, but we've really got to step it up. With no exhibition games, we’re getting these scrimmages to see how we want to play and get the understanding of what I want from the guys.”

As it stands now, the ice at these training camp skates is pretty packed.

The Checkers’ roster currently houses 30 skaters and four goalies. Included in that are a solid chunk of the corps that will likely make up the opening-night roster - as Florida has trimmed its roster twice - along with a contingent of players signed to AHL contracts and another group of players attending as invites.

For the players in those latter two groups, these early days of camp are their shot at making a strong impression.

“The mindset is, ‘I have to get better every single day and I have to make sure I’m ultra competitive,’” said Kinnear said of what he’s looking for out of his skaters.

As those players battle to make a name for themselves, veterans like Dalpe are setting the standard and offering words of wisdom.

“Dalps is the captain, he leads by example and brings energy to the rink,” said Kinnear. “He’s a guy that’s been in the league a long time but nobody’s more excited to be on the ice than Zac.”

“Geordie always preaches two things - be a hard worker and be a good guy,” said Dalpe. “I don’t think you’ll ever be in GK’s dog house if you work hard. That’s the message that we try to preach. It starts from the top down, if your engine and your best players are the ones working hard, then it bleeds through the dressing room.”

Training camp is a key opportunity for those AHL-contracted players to push for a roster spot and for the invites to position themselves for a tryout when the situation calls for it during the season. But the glut of bodies on the ice also helps elevate the level of play across the board.

“Competition is important,” said Kinnear. “When you have people that come in who are hungry - free agent tryouts, guys who want to make the team - it just pushes everybody. You need that upward pressure. It’s the reality of the business that there’s always someone knocking at your door, so you have to be on your toes.”

This season marks Charlotte’s first as Florida's sole AHL affiliate. With Seattle’s farm team up and running, the Checkers will be stocked entirely by Panthers’ products - meaning that there will be an influx of new faces at the Coliseum.

Having Dalpe headlining the returning players is a solid foundation for introducing the new wave of talent to Charlotte.

“It’s all about who you have in place,” said Dalpe. “I like to be a guy who welcomes people no matter where they come from as far as teams and leagues last year. Try to gel right away, maybe a couple off-ice activities and we’ll hit the ground running.”

Even with the roster still packed, the group on the ice Wednesday already had a familiar feel to it.

“It’s a fun group, that’s kind of the environment that we create,” said Dalpe. “We’re just slowly building where we left off last year. That’s the main goal.”

Coach Kinnear’s impressions of the group as it stands is a similarly positive one.

Kinnear doesn’t have to search far for the blueprint of melding a team in a short amount of time - his staff did just that last season as they juggled the dual affiliation.

“You look at last year, we found an identity with a whole new group,” he said. “So that’s our focus right now - to get the guys on the same page.”

The Checkers were a contender last season, emerging as one of the league’s stronger squads and capturing a division title. When their season was cut short with a playoff exit at the hands of Springfield, an emotional Dalpe conveyed how much he and the team wanted to win.

That drive to win is still palpable on the ice in camp, and Dalpe plans to keep it instilled in his group going forward.

“I think it’s the culture that we’ve created,” said Dalpe. “We’ve only been here one year with Florida. We didn’t win it all last year but we won a lot of games. Hopefully those translate into the more important months of the season. It’s a cliche but it does start in training camp.”