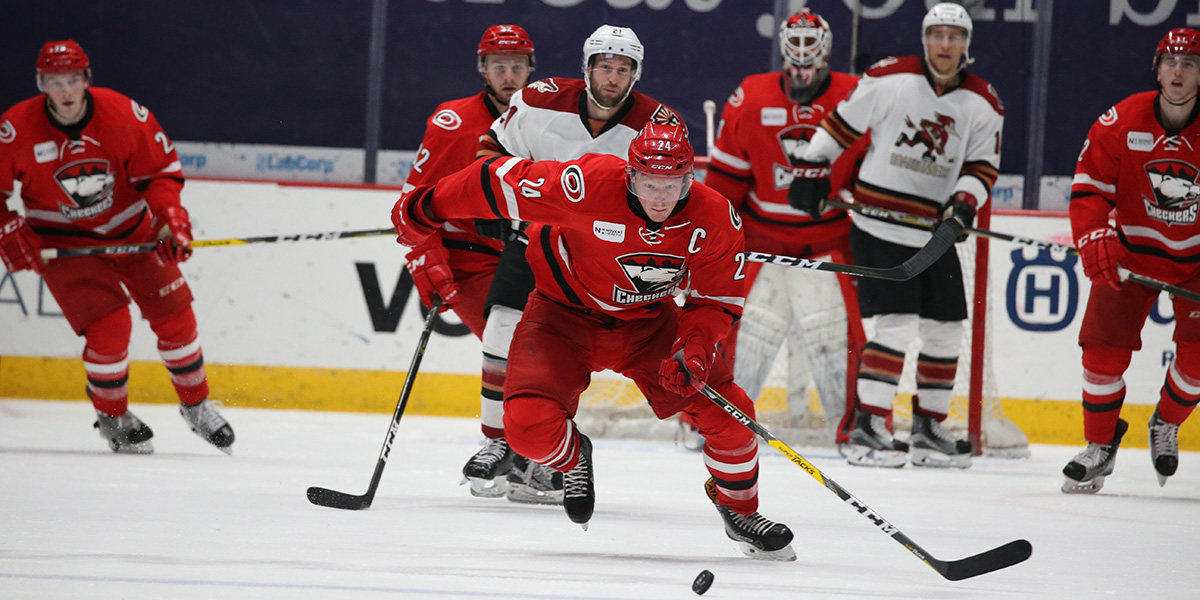 After regrouping over the All-Star break, the Checkers faced a tough foe on the road last weekend and got a good barometer of where their offense stands heading into the second half.

Despite some apprehension over the timing of the All-Star break – head coach Ulf Samuelsson commented after the team’s last game beforehand that the team was playing well and he’d “like to keep it going” – but the Checkers didn’t show many signs of rust against Tucson.

“I thought we played OK,” said Samuelsson. “It was an ok weekend. We play one of the better teams out West on the road and we get one win and we came real close to getting two. There are some good things that we can take with us for sure from that trip.”

The two tilts in Tucson showed opposite ends of the spectrum for the Checkers’ offense. The numbers have been clear cut all year – Charlotte is 17-0-1 when scoring at least three goals and 3-22-2 when falling below that mark – and those trends held strong in the team’s 3-2 loss and 4-2 win. They have seen an uptick in those outbursts as of late, scoring at least three goals in seven of their last 11 contests, but Samuelsson sees those fluctuations as more of an example of the team adapting then an indication of a new offensive identity.

“I think we’re capable of going if there’s open ice, but sometimes the play of the opponent dictates how much ice you have to work with and how much you can create,” he said. “Tucson played a good game. They’re a bit more on the conservative side, so you have to be patient and be smart with your reads.”

While the five-on-five scoring has trended in the right direction, the Checkers’ power-play struggles haven’t dissipated yet, though they did see a glimmer of hope.

Charlotte’s power play, ranked last in the AHL, finally broke a seven-game, 0-for-23 drought when Patrick Dwyer lit the lamp on an early man advantage in Saturday’s win. That goal in particular exemplified what Samuelsson wants to see out of his power-play units, a group whose play he has staunchly defended since day one.

“They’ve done a lot of good things,” he said. “The structure has been good and we’ve been getting it in the zone quite a bit. Right now we have to dial in our shooting. Our shooting hasn’t been good. You see the goal that Dwyer scores, there’s a little bit of deception there. He looks one way then shoots the other way. That’s an area we can improve.”

As far as the main root of the special teams issues, Samuelsson shrugged off the suggestion that it is mental and pointed to something much simpler.

“I quite frankly think it’s mostly skill,” he said. “It’s one of the hardest things in hockey. Starting with the breakout, you’re coming up the ice and you have four guys there who all they’re thinking about is breaking it up. You have to see what’s open.”

While the team has continued to appear more comfortable with the newly-implemented breakout system on the power-play, gaining sustained pressure after the zone entry is the other half of the equation.

“It’s the same thing in the zone,” said Samuelsson. “You have one more man so one man should always be open, it’s just a matter of finding them. And then when you do, get that screen and a great shot.”

The Checkers will have a shot at pulling that percentage up this weekend as they face a Stockton team that sits in the middle of the pack in terms of penalty killing overall but have the fourth-worst percentage away from home.