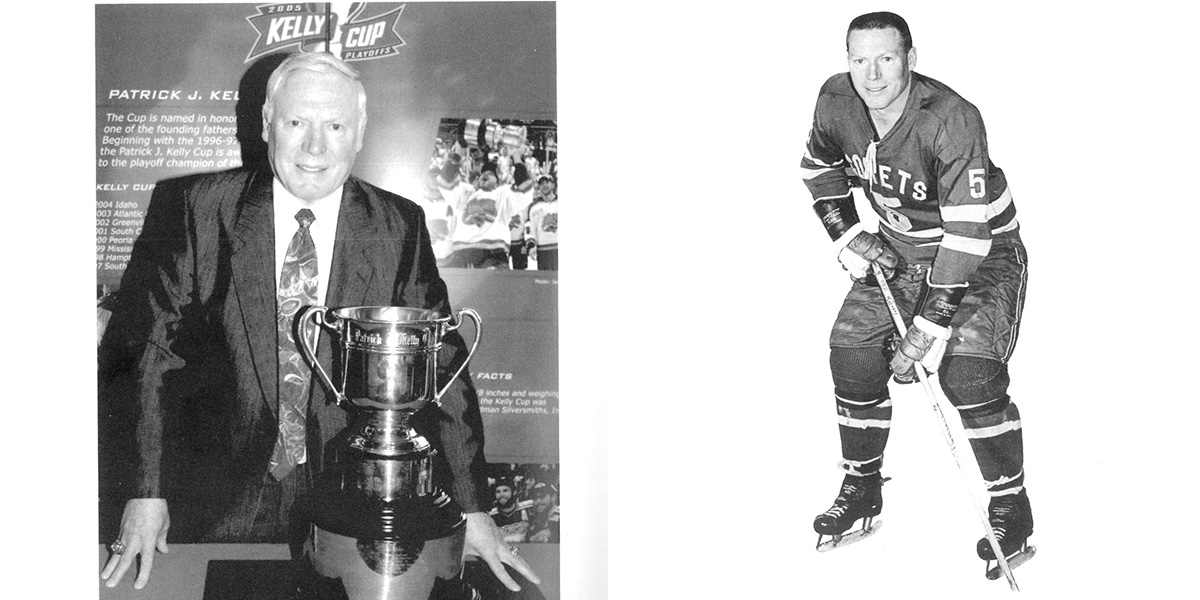 Hockey in the 1950s was a whole different animal, and perhaps no one in Charlotte knows that better than Pat Kelly.

Kelly, a legend in the hockey community who helped co-found the ECHL and was awarded the prestigious Lester Patrick Award in 2016, spent most of his career grinding it out in the Eastern Hockey League, a minor professional league with teams that spanned the East Coast from Cape Cod to Jacksonville.

“You didn’t have much chance of making it to the next level since there was only six American League teams and six National League teams,” said Kelly. “They just loved to play hockey. They were great guys to be around. They came to play every night. You made $175 a week and back in those days that was a lot of money. Most of the kids were Canadian. There weren’t many American guys and there were no Europeans. So you had 14 guys on a team and chances are you probably played minor hockey in your hometown with some of them.”

The EHL was a rough and tumble league, so while some of the high-end skill may have been missing, every player on the ice had to be tough to survive its grueling nature.

“Back in my day, you only had 14 guys on the team,” said Kelly. “There were lots of shenanigans going on, guys sticking people, lots of fighting. It wasn’t as fast as this hockey today, but we played 72 games in 20 weeks so you didn’t miss much ice time. If you got hurt or something, they never brought anyone extra along, so you’d just play shorthanded.”

Given how far the protective equipment has come over the decades since, it was pretty tough to avoid getting hurt during that era.

“We didn’t wear face shields, we didn’t even wear helmets,” said Kelly. “The equipment wasn’t good. I remember as a defenseman if I blocked a shot I’d take my pads off and there would be a knot in my leg. These kids aren’t afraid to block shots. Our forwards never blocked shots. That wasn’t their job, that was the defense’s job. But you watch these kids today, they’ll sprawl out in front of those 100-mile an hour shots.”

Kelly starred as a blue liner for the Greensboro Generals, Charlotte’s bitter rivals at the time. While hockey didn’t have much of a natural following when it first made its way to North Carolina, those two squads put on a big enough show to draw the locals’ curiosity, and soon it was one of the biggest games in town.

“When Greensboro and Charlotte played, we’d fill buildings,” said Kelly. “These are probably the biggest crowds that most of those kids ever played in front of.

Kelly has a long list of memorable games at what is now known as Bojangles’ Coliseum.

“We beat the Checkers 4-0 for the championship one year,” said Kelly, recounting a series from when he played for Greensboro. “They had a big tough guy, Foley, who was 6-foot-something. He speared me in the back, so I whacked him across the hip with my stick. I had a guy named Ian Anderson come off the bench to fight him because I couldn’t, I’m 5-foot-9. So Ian and I got kicked out of the game and we stood over in the corner and watched us win the fourth game.”

While Carolina embraced their teams, in other places it could be a tough sell.

“I remember we used to play up in New Haven and that was a pretty big betting town,” said Kelly. “So if the money was on the Clinton Comets that night and New Haven was winning, they’d be booing their own players.”

The 81-year-old Kelly, who serves as the ECHL’s Commissioner Emeritus, can often be found these days in the stands at Bojangles’ Coliseum watching this iteration of the Checkers, with a game that has come a long way.

“They didn’t grow up with that kind of tough hockey,” said Kelly of today’s players. “When we were playing Bantam and Midget hockey if we had to drop the gloves we did it. But these kids are better skaters than us, bigger than us.”

Kelly, often credited as a pioneer of southern hockey, credits those days as keys to hockey getting a foothold in the region.

“Charlotte paved the way for hockey in the South,” said Kelly. “A lot of great kids came through the Charlotte Checkers and the Greensboro Generals and the whole Eastern League back in my day. I’ll always remember my time there.”